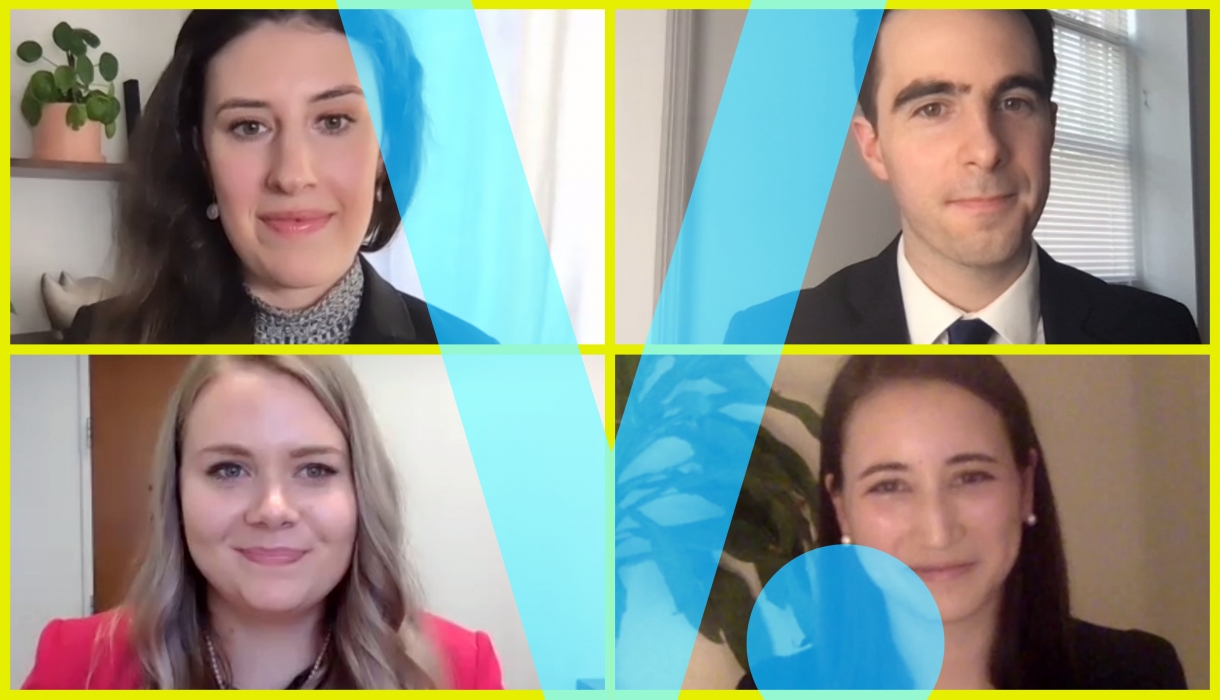 In the finals, Madeleine Durbin ’21 and Freya Jamison ’21 represented a whistleblowing bank employee—the relator in the case—who suspected fraudulent loans had been made under the PPP. Mai-Lee Picard ’21 and Samuel Truesdell ’21 represented the government, which successfully moved to dismiss the employee’s qui tam lawsuit at the trial court.

To begin, Jamison argued the court should not have accepted the government’s dismissal of the whistleblower case without inquiring whether it had done so properly.

“I want to ask you about the language in the statute,” Rivera interrupted, which “does indeed provide for the government to dismiss the action notwithstanding the objections of your client.”

Srinivasan went further, saying the statute only calls for a “hearing,” not for the court to engage in its own review.

“When Congress intends to just provide litigants with an opportunity to be heard and have courts play a passive role, it doesn’t use the term ‘hearing,’ which is a legal term of art,” Jamison replied. “Both lay and legal dictionaries alike agree that a hearing requires a judge to decide either a question of law or a question of fact.”

Boulware asked why courts can’t just adopt a deferential standard of review. “You’re asking us to second guess a decision about enforcement; isn’t that something courts traditionally do not do?” he asked.

But Jamison argued Congress intended to protect against improper dismissals.

“The government could have done what it does in more than 80 percent of these cases, which is simply do nothing and allow the relator to prosecute,” she said.

During his turn, Truesdell emphasized the importance of the Paycheck Protection Program, which is “crucial to our ongoing economic recovery,” and the government’s promise “not to pursue banks who make inadvertent mistakes.”

“The stakes in this case are too high to allow it to proceed,” he told the judges.

On the questions of whether the bank had knowledge of the violations and whether those were crucial to the decision to lend, Durbin explained that, even if some of the violations were “technical,” the “totality of circumstances. . . demonstrates something more is going on.”

Picard then argued that the government conducted its own investigation into the loans.

The bank “was simply trying to do the best they could to meet the needs of small businesses in an absolutely unprecedented time,” she said.

After more than an hour of arguments, the judges deliberated off screen and then returned to the Zoom audience of more than 200 members of the Law School community with their results: Jamison came away with the Lawrence S. Greenbaum Prize for best oral presentation, and Truesdell was recognized for the best final-round brief.

They also congratulated the finalists and the organizers.

“I did not hold back in the questions I asked,” Boulware said. “You fielded the very questions appellate counsel would have in this type of case, and you did it very well.”

The judges also praised the case, which Srinivasan said was “indicative of the kinds of cases we get in my court.”

In crafting the record, Williams acknowledged the guidance and support from, among others, Gillian Metzger ’96, Harlan Fiske Stone Professor of Constitutional Law; Gerard E. Lynch, Paul J. Kellner Professor of Law and judge on the U.S. Court of Appeals for the 2nd Circuit; and John P. Elwood, head of the appellate and Supreme Court practice at Arnold & Porter Kaye Scholer, where Williams will start as an associate in the litigation practice group after graduation.

“Seeing other people take your problem and run with it was an exciting prospect,” Williams said. “I knew if I did my job correctly, they would really run far and enjoy it.”

“I’m unbelievably impressed that Jillian wrote this problem,” Picard said. “I was excited to work on something so timely.”

The three-round Harlan Fiske Stone Moot Court competition began with 44 students in the fall, with 16 students advancing to the semifinals. All four finalists participated in specialized moot court competitions as 1Ls (Durbin and Jamison, partners throughout the Harlan Fiske Stone competition, were paired as 1Ls in the LaLSA Moot Court, eventually winning first place overall and third-best brief at the Asylum and Refugee Law National Moot Court Competition that year). The bailiff for the final round was Taylor Sutton ’21, who narrowly missed the finals following a tiebreaker with Jamison after earning the same score in the semifinals.

After the event, Jamison said she was “shocked and thrilled” to receive the Greenbaum prize.

“As an aspiring civil rights lawyer, it was an honor to argue before a panel of judges who each had experience in public service before joining the bench,” she said, adding that she was grateful for the entire team behind the competition, including her fellow finalists. “I learn something new about argument every time I hear my peers present.”