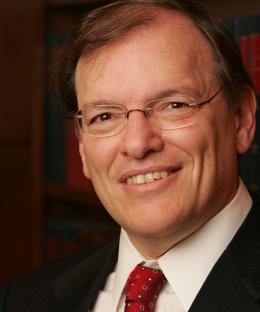 Gerard E. Lynch ’75 is a judge on the U.S. Court of Appeals for the 2nd Circuit, to which he was appointed by President Barack Obama in 2009. From 2000 to 2009, he served as a U.S. district judge for the Southern District of New York. An award-winning teacher and former federal prosecutor, he teaches courses on civil procedure and appellate advocacy. He is also a respected scholar who is the author of a book-length study of the Racketeer Influenced and Corrupt Organizations Act, as well as many journal and law review articles on sentencing and other criminal justice issues.

Lynch graduated first in his class from Columbia College and from Columbia Law School. He joined the faculty in 1977 and served as the Law School’s vice dean from 1992 to 1997. During his tenure at Columbia Law, Lynch has been honored with all of the school’s most prestigious awards: the Medal for Excellence, which is presented annually to alumni and past or present faculty members who exemplify the qualities of character, intellect, and social and professional responsibility that the Law School seeks to instill in its students; the Wien Prize for Social Responsibility; and the student-voted Willis L.M. Reese Prize for Excellence in Teaching. He also was the first Law School professor to receive the Columbia University Presidential Award for Outstanding Teaching. He has been awarded the Learned Hand Medal for Excellence in Federal Jurisprudence by the Federal Bar Council, and the Edward Weinfeld Award for Distinguished Contribution to the Administration of Justice by the New York County Lawyers Association.

Lynch began his career as a law clerk to Judge Wilfred Feinberg ’46 on the U.S. Court of Appeals for the 2nd Circuit and for Justice William Brennan Jr. on the U.S. Supreme Court. He was an assistant U.S. attorney for the Southern District of New York from 1980 to 1983 and the chief of the criminal division from 1990 to 1992. He has been counsel to several special prosecutors investigating government corruption and served from 1992 to 2000 as counsel to the New York firm of Howard, Darby & Levin and its successor firms. He is a member of the Council of the American Law Institute.

Professor Gerard Lynch '75 Inducted to U.S. Court of Appeals for the Second Circuit