This year’s case is United States of America ex rel. Moore v. Confluence Bank, N.A., and River Confluence Group. The competition takes place on April 8. Picard will be arguing for the intervenor-plaintiff-appellee. 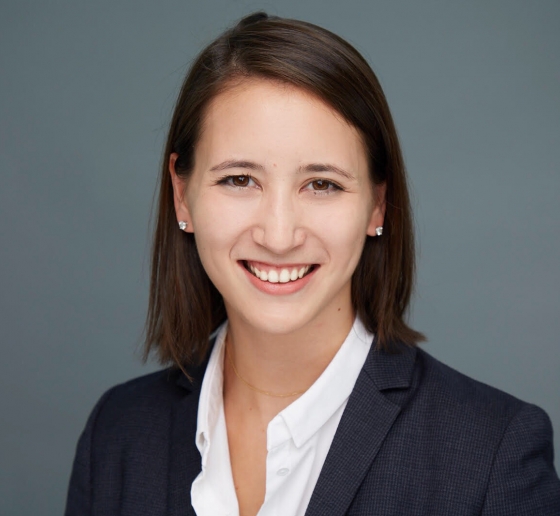 Mai-Lee Picard ’21 revels in the moment just before the start of a moot court argument, when it seems “my heart is literally beating in my ears.”

“I love that feeling,” she says.

Performing in front of people comes naturally to Picard; she was a ballet dancer for many years, and her experience in front of the crowds has aided her on the road to the Harlan Fiske Stone Moot Court finals.

Picard set her sights on the law at a young age. The New Jersey native spent two years of high school in Mexico City, was a philosophy student at Cornell University, and spent two summers working at the Legal Aid Society and the Manhattan District Attorney’s office. After graduating, she spent two years as a paralegal at the U.S. Attorney’s Office for the Eastern District of New York working on complex securities litigation, including the high-profile trial against Martin Shkreli.

“I loved the people, and I loved the work they were doing,” she says. “I had amazing bosses.”

Those people include Columbia Law School alumni, such as David Pitluck ’07, Lauren Elbert ’09, Jacquelyn Kasulis ’03, and Matthew Amatruda ’97, who pointed her in the direction of Morningside Heights.

“We prepare as much as possible for an argument, but you can never truly know what someone will ask you in the moment or what a particular judge will want to focus on in your argument until you’re there. Doing this has helped me think quickly on my feet and I’ve enjoyed working with the flow of the argument.”
—Mai-Lee Picard ’21

As a 1L, Picard participated in the Frederick Douglass Moot Court Competition (or “Fred Doug” as she and her friends referred to it); she returned as a 2L to coach.

“I learned pretty much all the oral advocacy skills I have today from Fred Doug,” she says. “I cannot say enough good things about that team.”

Alumni also mentored Picard. During her summer internship with U.S. District Judge George B. Daniels of the Southern District of New York, clerk Luis Hoyos ’16 helped her improve her legal research and writing.

To prepare for moot court, Picard practices portions of her argument around the house—while she’s cooking dinner, for instance. She starts from a different place in the narrative every time so she’s better prepared to “pivot” from a judge’s question to her main points, a technique she learned from one of her Frederick Douglass competition coaches.

Picard, who will join Debevoise & Plimpton next year, says she tries to channel the “presence” of the assistant U.S. attorneys she saw when she was a paralegal in the Eastern District.

“They seemed relaxed,” she says. “They were there to figure out the truth and get to the best outcome. I try to emulate that to the best of my ability. I’m not up there to manipulate the judges into one thing or another. I’m arguing a side that I think is right, and hopefully they agree with me.”