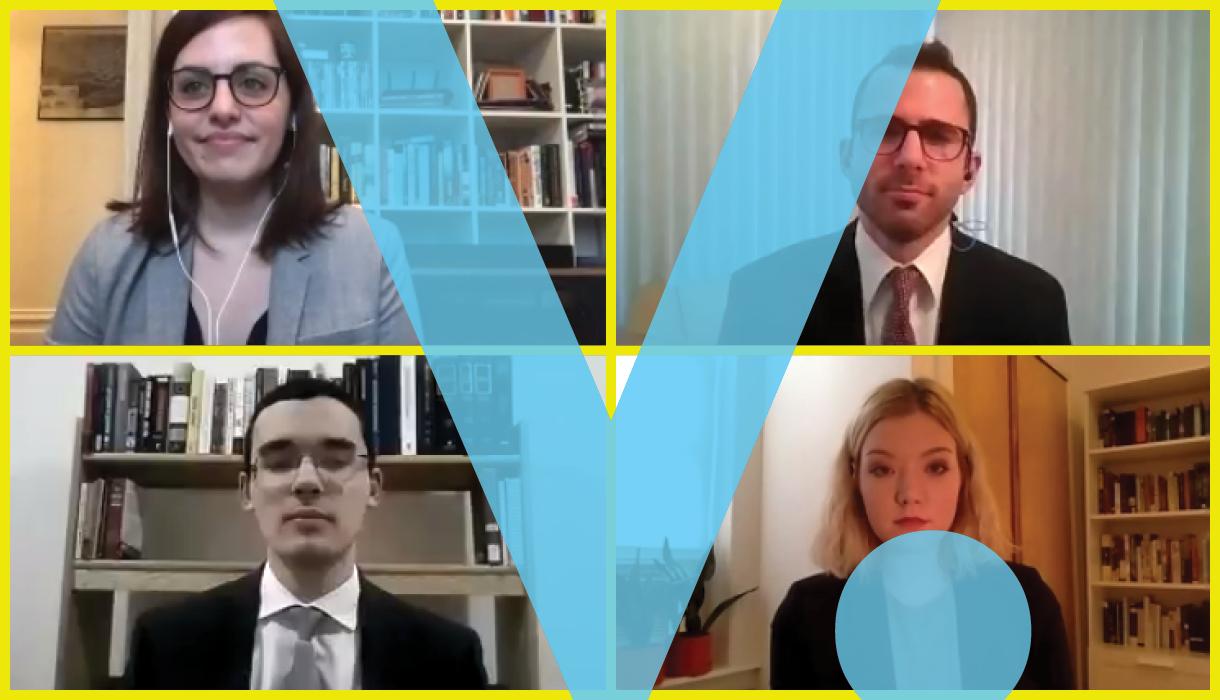 The audience was offscreen and the courtroom replaced by living rooms. But that didn’t stop four Columbia Law School students from doing their best to persuade a panel of federal judges in the first-ever video-conferenced finals of the Harlan Fiske Stone Moot Court Competition.

Because of the global COVID-19 crisis, the May 1 hearing was held online before Judges Joseph F. Bianco ’91 and Debra A. Livingston of the U.S. Court of Appeals for the 2nd Circuit, and Judge Adalberto Jordán of the U.S. Court of Appeals for the 11th Circuit. In her introduction, Gillian Lester, dean and Lucy G. Moses Professor of Law, praised the moot court faculty and students for being “resolute that the show would go on” despite the pandemic. More than 300 people—including professors, classmates, and friends and family of the finalists—signed up to watch the competition remotely.

After checking and re-checking their internet connections, sequestering pets, and asking friends, family members, and roommates to keep quiet in nearby rooms, the students made their cases over Zoom.

In the end, one of them—Christen E. Hammock ’20—won top honors for best oral presentation and best brief.

The fictional case up for debate involved three plaintiffs with vision or hearing impairments who claimed that the website of Secret Saturdays, a pop-up dinner party company, violated their rights under the Americans with Disabilities Act (ADA). Hammock and Lydia Turnage ’21 represented the plaintiffs; Gregory Bernstein ’20 and Andrew Khanarian ’20 argued on behalf of the defendant company.

“I became deeply interested in the number of open questions about how the ADA was being applied nationwide, particularly in this digital age,” Gerry said.

The finalists, who took turns addressing the judges, each faced tough questions. Bernstein, the first to argue, was asked by Livingston if it mattered that Secret Saturdays didn’t fix their website until after the lawsuit was filed.

“Doesn’t that make a difference?” the judge asked.

Bernstein answered that timing may shed light on a defendant’s motivation, a point that Hammock pounced on when she took the virtual podium.

“We should actually be suspicious of defendants that take these sort of mid-litigation changes in order to take away the plaintiffs’ right to their day in court,” she said.

Turnage and Khanarian, meanwhile, sparred over whether the ADA applies to websites at all.

“The purpose of the ADA . . . is to provide access for individuals with disabilities to all aspects of American social and economic life,” Turnage said. “So it certainly does not run contrary to the language of the statute to say the categories of public accommodation should be read as broadly as possible.”

Khanarian countered that the ADA’s text was “a very strong indicator that [the law] unambiguously refers only to physical spaces.”

But Bianco, who was a finalist in the competition when he was a student, and Livingston, who serves on the Law School’s faculty, both took aim at that argument.

“So Amazon could be completely inaccessible to disabled people?” Bianco asked. “Am I misunderstanding your position?”

When Livingston pressed for an answer, calling that “an almost absurd conclusion,” Khanarian had a ready response: “My understanding is that Amazon does own Whole Foods,” he said. The clarification—that the company is tied to a physical space—was important to his argument: Some courts have applied nexus tests that look for such a connection.

After the judges deliberated by phone, they congratulated the finalists. Livingston acknowledged the “very strange circumstances” that have pushed moot and most actual litigation to remote technologies.

“Lawyers around the country are feeling their way, and you had the experience of being part of that,” she said. “It’s very historic.”

“You are well on the road to being really great lawyers,” she added.

Ilene Strauss, Columbia Law School’s director of legal writing and moot court programs, after the event praised the judges and finalists for their commitment to the competition, especially in the weeks leading up to the finals as the severe consequences of the virus became more apparent. The judges were “all in,” she said, and “these competitors wanted to compete. Their willingness to adapt to technology and push the date back to come just before final exams was remarkable.”

In addition to Gerry, the student committee overseeing the competition included Executive Director Ryan Poladian’20, First-Year Program Director Anne Mosley ’20, and External Moot Court Programs Director Grace Assaye ’20. The three-round elimination competition began with 73 students at the start of the fall semester, with 16 advancing to the semifinals in January. The four students with the highest scores from alumni judges were selected as finalists.

Hammock said she was “totally shocked” to win both prizes.

“I’m so thankful to Ilene and Emily for working so hard to give us the chance to compete and to the judges for being so flexible,” she said.

Read All Stories More in The Press
Students Video