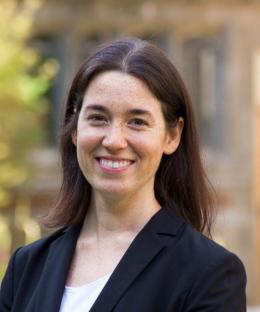 Kristen Underhill is an innovative public health and policy law scholar who applies evidence-based practices to her research and teaching of health law. She holds a joint appointment with Columbia University’s Mailman School for Public Health and studies how laws and regulations influence individuals’ decisions about risk and health behavior. Her ongoing projects include investigations of the influence of nondiscrimination law on patient decision-making, financial incentives on intrinsic motivation, implicit racial bias on altruistic decisions, and dispute resolution for injuries related to biomedical research.

Underhill has received several grants to lead research projects in the field. She was the principal investigator of a six-year National Institute of Mental Health Study on health care access and the behavioral impacts of the pre-exposure prophylaxis PrEP as a strategy for HIV prevention among male sex workers and men who have sex with men. She is also the co-principal investigator of two studies in Kentucky on the state’s Medicaid waiver policy, examining residents’ attitudes and beliefs about Medicaid and evaluating the effects of waivers on health care utilization and uptake, labor market participation, and health outcomes.

Before joining the Columbia faculty in 2016, Underhill was an associate research scholar and a fellow in law and health at Yale Law School, where she was also a member of the Yale Center on Interdisciplinary Research on AIDS. While a J.D. student at Yale, she was the editor in chief of the Yale Journal of Health Policy, Law, and Ethics.

“My work approaches law from an empirical and behavioral perspective, examining how law shapes social influences and individual decisions. . . . Part of the appeal of this approach is that well-intentioned rules can have unpredictable effects, particularly when they have heterogeneous impacts on different parts of the population. Law has much to gain from rigorously testing the behavioral assumptions that bolster legal rules.”

Read All Stories More in The News
News