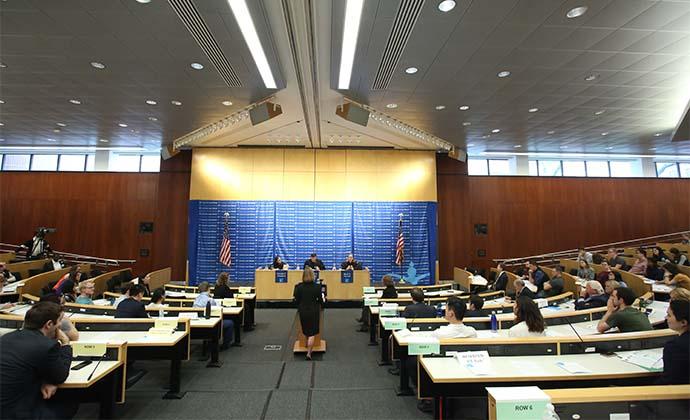 Four Columbia Law School 3Ls demonstrated their oral advocacy skills when they faced off over complicated First and Fourth Amendment questions in the final round of the Harlan Fiske Stone Moot Court Competition on April 8.

At the end of the fast-paced oral arguments, during which the students were interrupted frequently by pointed questions from the judges, Jeremy Patashnik ’19 was awarded both the Lawrence S. Greenbaum Prize for best oral presentation and honors for best final round brief. He and his co-counsel, Christian Ronald ’19, argued on behalf of a defendant in a fictional case arrested for damage to federal property. Tory Roberts ’19 and Jing Wang ’19 argued on behalf of the U.S. government.

“Getting to argue in front of federal judges in the final round was an amazing experience and a great way to cap off my three years of law school,” says Patashnik, who as a 1L shared the top prize in the National Environmental Law Moot Court Competition with two teammates.

The underlying criminal case was written by Harlan Fiske Stone student co-directors Sophie Tarazi ’19 and Daniel Rosenfeld ’19. It stemmed from a protest against the opioid crisis: a chalk drawing of a pharmaceutical pill bottle, a dollar sign, a skull and crossbones, and the words “prosecutorial discretion” on the sidewalk outside a federal courthouse. When police arrived at the home of defendant Jordan Clarkson to question him about the incident, Clarkson’s computer mouse was inadvertently bumped, “waking up” his computer monitors to reveal a list of photographs taken at the time of the alleged sidewalk chalking incident and an open draft email with the same photos attached to it. Clarkson was arrested and charged with violating a fictional federal statute prohibiting damage to federal property.

In his case, Clarkson argued that the photos should not have been allowed into evidence because he had not consented to the officers’ entry into his apartment and because the photos were not in “plain view.” He also argued chalk art does not constitute “damage” under the law and that the law violates the First Amendment.

“The government has made a federal case out of chalk art,” Patashnik said at the start of his argument before the judges. Later, arguing that the search was unconstitutional, he added, “If investigating misdemeanor chalk art arises to what the police need to show to create a reasonable suspicion that they felt threatened, it’s hard to imagine what wouldn’t meet that standard.”

Ronald argued chalk art is not damage because it is easily removed and that traditional public fora, including a federal courthouse, are “in time immemorial used for expression of all different types.”

On behalf of the government, Roberts said that since the officers did not directly touch anything to reveal the computer file, they did not do anything improper.

“What if the officer . . . snuck up on Mr. Clarkson and said, ‘Boo,’ and, because of that, he knocked his computer. Would that be direct or indirect?” Howell asked.

“The line is still whether the officers physically touched evidence and caused it to come into plain view, which the officers here did not do,” Roberts answered.

Wang fielded some of the hardest questions—as Friedland described them after the competition—when he was asked if other forms of chalk art also would have led to an arrest.

“My kids always drew with chalk art,” Chagares said. “Are you saying they could be prosecuted by your office if they happen to go on some federal property?”

Wang responded that children wouldn’t have the necessary willful intent.

‘The Best Columbia Has to Offer’

After the more than hour-long main event, the judges gave all the competitors high praise.

“The achievement of these four people, just to make it here, is spectacular,” Chagares said. “This is about as good as you can get. You are all welcome in the 3rd Circuit any time.”

In particular, Friedland said Patashnik, who will join Covington & Burling LLP as a litigation associate after graduation, delivered a “beautifully” crafted rebuttal in response to questions the judges and his opposing counsel Roberts raised.

Addressing the packed house, Gillian Lester, Dean and the Lucy G. Moses Professor of Law, called the students’ performance “the best Columbia has to offer.” She also thanked the judges, advisers, and participants for their efforts and joined the celebration that followed.

Rosenfeld and Tarazi said they divided their work in developing the record. Rosenfeld, who participated in the Criminal Appeals Externship, tackled the Fourth Amendment questions, and Tarazi, who externed at the Knight First Amendment Institute at Columbia University, worked on the First Amendment and statutory interpretation issues.

“We knew we wanted to create a problem that drew upon important issues of constitutional law, and we also wanted to make the problem realistic by infusing it with current events,” Tarazi said.

The pair were guided by Daniel C. Richman, the Paul J. Kellner Professor of Law, and Ilene Strauss, director of legal writing and moot court programs. They sought additional feedback on the First Amendment and statutory interpretation issues from Vincent Blasi, Corliss Lamont Professor of Civil Liberties, and Peter L. Strauss, Betts Professor Emeritus of Law. Rosenfeld also drew on his coursework in his Criminal Investigations class, taught by Debra A. Livingston, the Paul J. Kellner Professor of Law and a judge on the U.S. Court of Appeals for the 2nd Circuit.

“It was really amazing to see the competitors take our ideas and run with them,” Rosenfeld said.

Richman said the case provided “an excellent platform for airing some important and topical legal issues.”

“Engaging with Sophie and Daniel as each pursued a deep interest—Sophie in the First Amendment and Daniel in criminal procedure—made the advising process easy and rewarding,” he said.

Roberts and Ronald have plans to continue their work with the courts after graduation: Roberts first will be an associate at Gibson Dunn in Washington, D.C., and then will clerk for Senior Judge Richard J. Leon of the U.S. District Court for the District of Columbia in 2023; Ronald will join the New York office of Wilmer Cutler Pickering Hale and Dorr LLP as an associate and will clerk for Judge Richard J. Sullivan of the U.S. Court of Appeals for the 2nd Circuit in 2020. Wang will work on patent litigation at Arnold & Porter Kaye Scholer LLP in Palo Alto, California.

The Harlan Fiske Stone Moot Court finals are the culmination of a three-round elimination competition. This year, 68 students entered at the start of the fall semester; 16 advanced to the semifinals in the spring. The four students with the highest semifinal scores from alumni judges were selected as finalists.

The annual competition is named in honor of 1898 graduate Harlan Fiske Stone and is part of the Paul, Weiss, Rifkind, Wharton & Garrison Moot Court Program. In addition to Tarazi and Rosenfeld, Stephanie Adamakos ’19 served on the student committee as executive director of the Columbia Law Moot Court Program and Sophie Gandler ’19 provided editorial assistance.