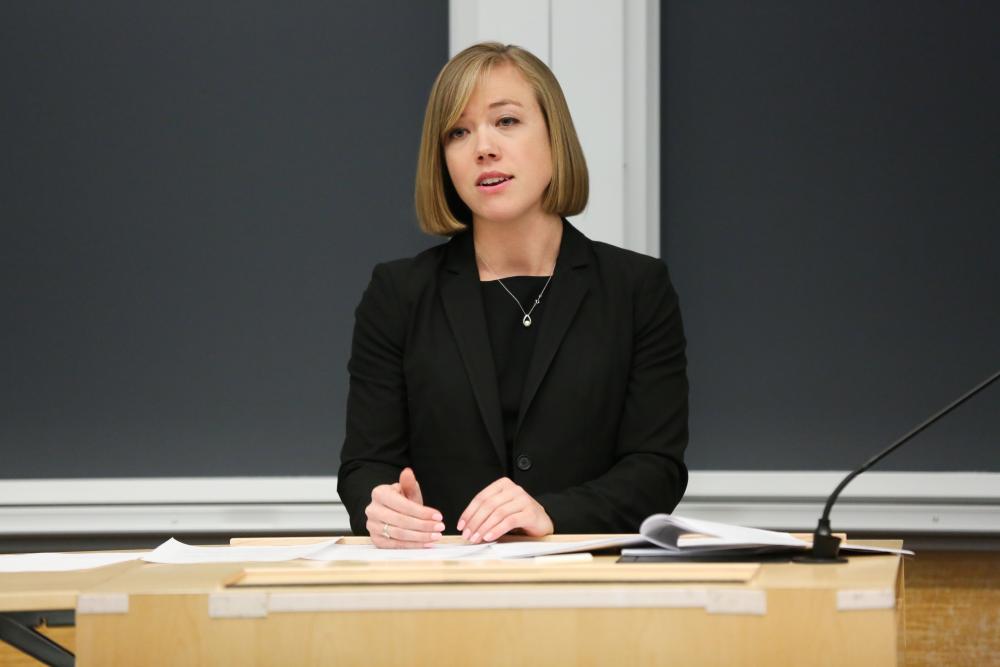 “I felt like I hadn’t done enough in law school to develop my oral advocacy skills, so I thought it would be good practice,” she says, adding happily, “I got a little more than I bargained for.”

Two rounds of briefs and oral arguments later, Roberts is now one of four finalists in the Harlan Fiske Stone Moot Court Competition. A counsel for the appellee in the finals, she is the only competitor who changed sides after the semifinals. For Roberts, a James Kent Scholar, arguing for the opposing party is another opportunity to expand on the lessons she has learned throughout the competition.

Roberts has drawn on two key experiences as she has advanced through each round. The first is her Federal Appellate Court Externship with the U.S. Court of Appeals for the 2nd Circuit, where she spent her mornings watching oral arguments and delivered an oral argument of her own before three circuit judges. “It made me less nervous about doing oral arguments and helped me understand the types of questions that are asked,” she says.

The second experience is nearly three years of “cold calls,” the practice by which professors randomly call on students to answer questions in class. “Having to be comfortable getting cold-called in a lecture room of over a hundred people—I think that is really helpful in terms of thinking on your feet,” she adds.

“I was pretty sold after that experience. This is what I wanted to do,” she says. “I really enjoyed working with the lawyers, and I think working as a paralegal at a smaller firm gets you more substantive experience.”

Roberts currently serves as an articles editor for the Columbia Law Review, a role she considers to be “the most intellectually rewarding experience” of her time in law school. “It’s really interesting to get an inside look into how legal academia works, read different legal scholarship, and meet with a group of your peers and talk about it,” she says.

Roberts also counts her constitutional law class with Professor Jessica Bulman-Pozen and her administrative law class with Professor Gillian Metzger, the Stanley H. Fuld Professor of Law, as two courses that have shaped her law school experience and post–law school plans. Roberts says the latter course influenced her decision to move to Washington, D.C., after graduation, where she will join Gibson, Dunn & Crutcher LLP as an associate before clerking for Senior Judge Richard J. Leon of the U.S. District Court for the District of Columbia in 2023.

Until then, Roberts is savoring her last few moments in the moot court program, especially the opportunity to work with her peers outside of class. “I didn’t have a ton of experience with doing moot courts, so I’ve been surprised at how much I’ve enjoyed the experience,” she says.