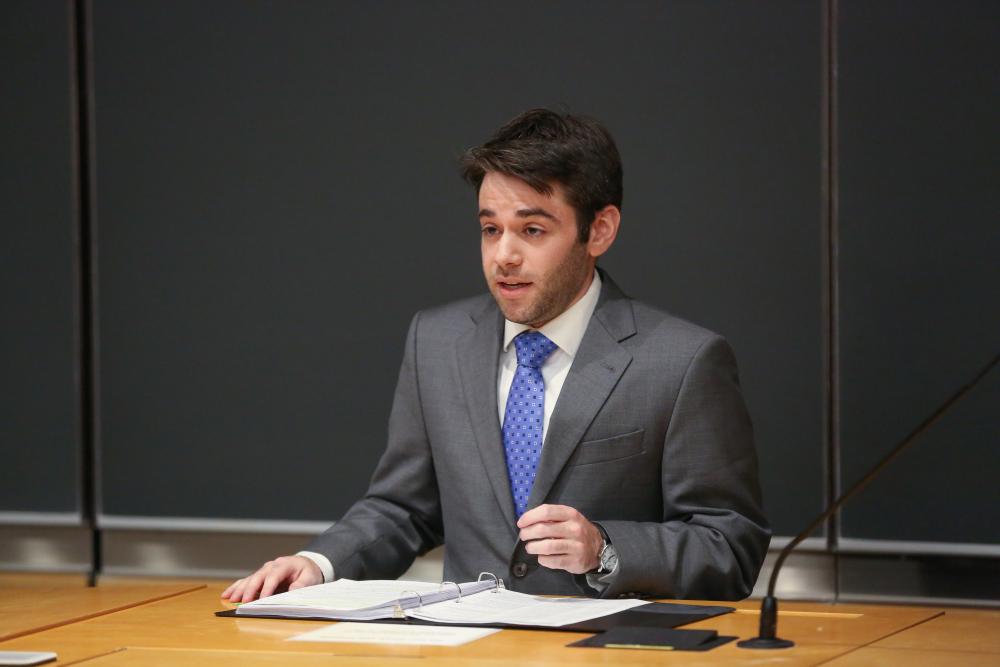 By the time Jeremy Patashnik ’19 arrived at Columbia Law School in 2016, lawyering was already the third career he had considered and pursued.

After graduating with a B.A. in economics from Harvard University in 2012, Patashnik moved to Washington, D.C., planning to work toward a Ph.D. in economics. He served as a research assistant at The Brookings Institution for more than a year. In a shift, he moved to Los Angeles to pursue a career in screenwriting. There, Patashnik worked as a personal assistant and tutored to support his screenwriting career for two years—then decided to switch paths one more time.

“I realized I didn't like creative writing that much more than I liked other forms of writing,” he says. “I just wanted to do something where I could write, and I think law school and particularly a career in litigation is something that allows you to do that.”

This decision led him to Columbia Law, where he is now one of four finalists in the Harlan Fiske Stone Moot Court Competition. The competition is Patashnik’s second moot court experience. As a 1L in 2017, he was part of the first Columbia Law School team that won the annual Jeffrey G. Miller National Environmental Law Moot Court Competition at Pace University. For his accomplishments, Patashnik was awarded the Simon H. Rifkind Prize, which is given to students with the best overall performance in the first-year moot court program.

“Environmental law moot court was the highlight of my 1L year, and I met two of my best friends through that experience,” he says. “I had some sentimental attachment to moot court and also found it to be a very academically enjoyable and enriching experience, so I decided to do it again.”

Currently, Patashnik serves as an articles editor for the Columbia Law Review, one of his favorite roles as a law student. Building on that experience, as well as his externship with the environmental protection bureau of the New York Attorney General's Office and his participation in the environmental law moot court, Patashnik wrote a note titled “The Trolley Problem of Climate Change: Should Governments Face Takings Liability If Adaptive Strategies Cause Property Damage?” under the advisement of Professor Michael Gerrard. It will be published in the 119th volume of the Columbia Law Review in June.

After graduation, Patashnik will join Covington & Burling LLP in New York as a litigation associate. While he looks forward to exploring which areas of the law interest him most, for now he is enjoying his last few months at Columbia Law.

“I think law school has a reputation for being a very competitive place where people mainly are looking out for themselves, and I haven't found that to be the case at all,” he says. “I’ve really enjoyed getting to know everyone here, and I think next year, when it’s all over, that’s what I’ll probably miss the most.”