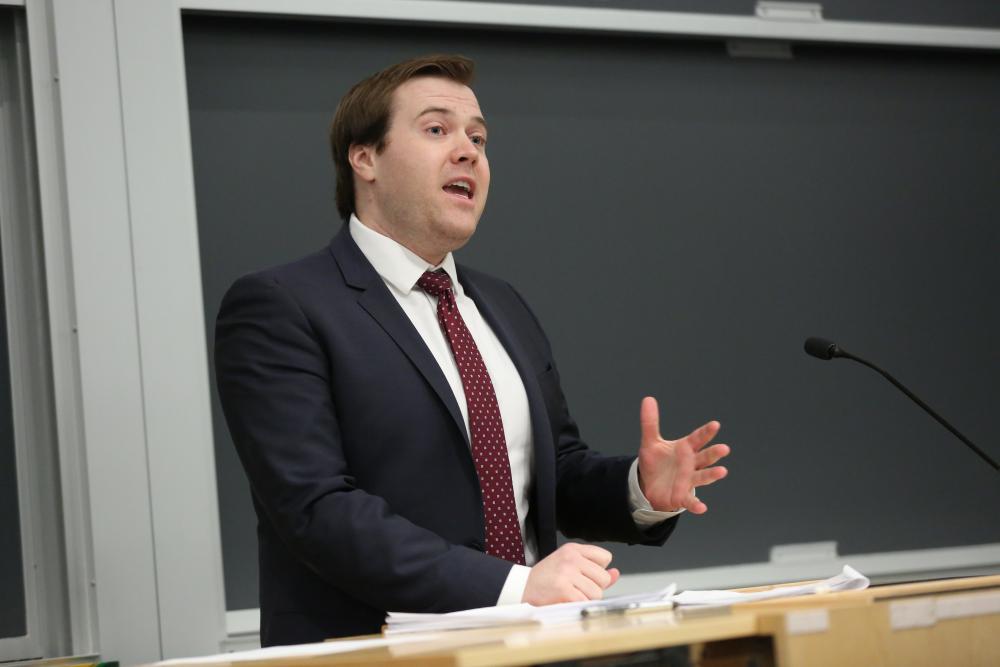 While serving as a dramaturg and script assistant for Finding Neverland the Musical, Christian Ronald ’19 spent a year researching and editing the script of the Broadway production. Now, as a Columbia Law School student pursuing a career in appellate litigation, Ronald says the two professions share a great deal of similarities.

“Working on a Broadway musical is surprisingly a lot like preparing for appellate arguments or working on an appellate case,” he says. “You’re surrounded by brilliant people with a ton of really great ideas, but at the end of the day, you have to crystallize those ideas into some sort of presentation where you’re trying to convince an audience of something.”

The Harlan Fiske Stone Moot Court Competition, in which Ronald is one of four finalists, is no exception. In each round, Ronald worked with other students in the competition to prepare for oral arguments, a process he feels added an element of collegiality to the program.

“I’ve been blown away throughout the entire process by how prepared and composed everyone is. But everyone’s very friendly as well, and that was a pleasant surprise,” he notes. “It’s a pretty close community, and although we had opponents in each round, everyone was extremely supportive.”

After working on Finding Neverland the Musical and as a literary agent assistant at Abrams Artists Agency, Ronald enrolled at Columbia Law with a plan to work in transactional law or entertainment law. But soon after joining the American Intellectual Property Law Association (AIPLA) Giles Sutherland Rich Memorial Moot Court program as a 1L, he discovered an unexpected interest in appellate litigation. Ronald says working with lecturers Timothy DeMasi and Henry Lebowitz, the instructors for AIPLA, sparked his interest in participating in the moot court program as a 3L.

“They taught me a lot about writing appellate briefs and appellate advocacy, and that really got me interested in the program as a whole,” he says.

Ronald has built on his AIPLA experience by exploring academic and professional opportunities in appellate litigation. As a 2L, Ronald participated in the Federal Appellate Court Externship, in the chambers of Judge Denny Chin of the U.S. Court of Appeals for the 2nd Circuit. As a summer associate at Wilmer Cutler Pickering Hale and Dorr LLP during his 2L summer, Ronald worked on an amicus brief concerning the contentious citizenship question on the 2020 census.

Presently, Ronald is in an appellate advocacy course with Debra A. Livingston and Gerard E. Lynch, both Paul J. Kellner Professors of Law and judges on the U.S. Court of Appeals for the 2nd Circuit. He calls the course a “fantastic experience” in which he and his classmates prepare merit briefs and argue real cases pending before the U.S. Supreme Court in every class.

Ronald also dedicates his time to the Columbia Journal of Law and the Arts, where he is the executive notes editor; in 2018, the journal published his note “Burdens of the Dead: Postmortem Right of Publicity Statutes and the Dormant Commerce Clause.”

Ronald, who will join WilmerHale after graduation before clerking for Judge Richard J. Sullivan of the U.S. Court of Appeals for the 2nd Circuit, sees the moot court competition as a rare opportunity to prepare for his career.

“One of the big reasons I wanted to do this competition was to improve my writing skills and my ability to succinctly present arguments,” he says. “After law school, it might be a while before I’m up there again, so taking every opportunity I can to write a full brief and to prepare an oral argument is important.”