Led by Professor Matthew Waxman, the program focuses on a real-world approach to thorny issues of armed conflict, intelligence, and cybersecurity. 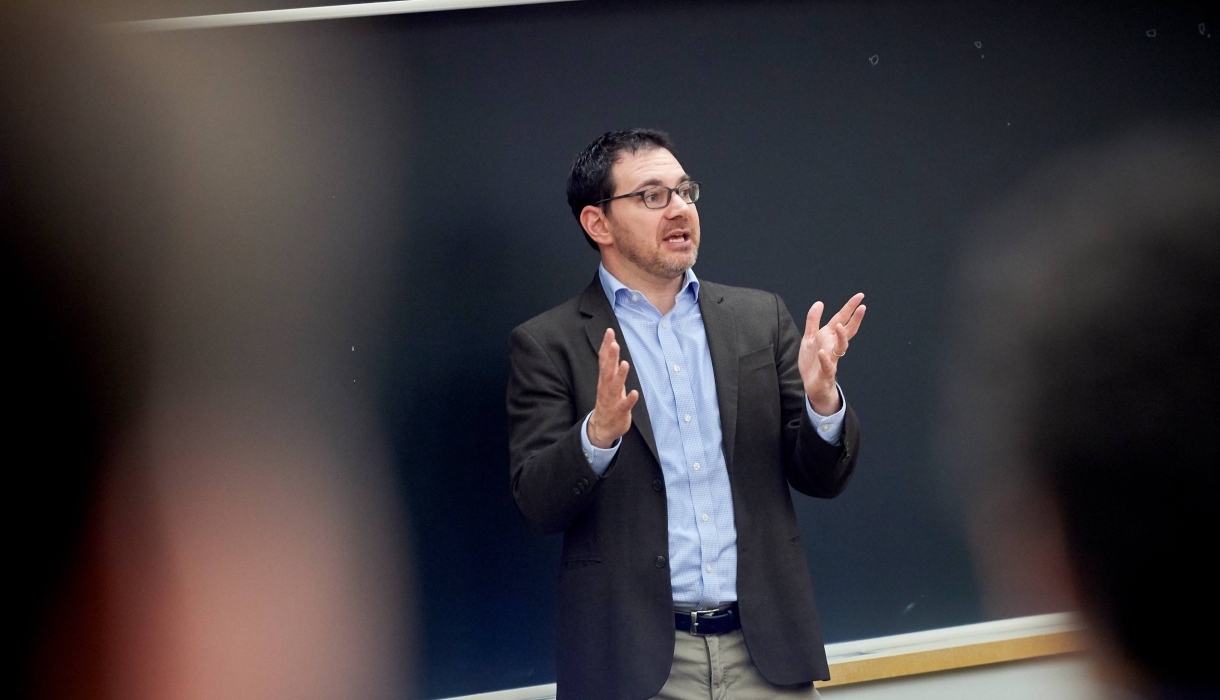 When Matthew C. Waxman joined the Columbia Law School faculty in 2008, the United States was still deeply enmeshed in the Iraq conflict that followed the 9/11 attacks, and counterterrorism was foremost among student interests. Today, cybersecurity and technology are top of mind for students, and China has replaced Iraq as the main focus of national security concern.

The field of national security law can change rapidly, Waxman points out, but it also revolves around some perennial challenges like balancing national security and individual rights and giving the president sufficient power to manage crises while preserving checks and balances.

The goal of the National Security Law Program is “to challenge students to think about the real-world threats and pressures of national security law and policy decision-making,” Waxman says. National security is a field where lawyers “wrestle with extremely hard calls, often involving grave risks in either direction.”

And, importantly for law students considering government service, “National security law is a field where even at a very junior level you can be playing a critical role and working with people who are deeply committed to their mission,” he says.

That was Waxman’s own experience. Two years out of law school, he was a newly hired special assistant to National Security Advisor Condoleezza Rice when terrorists struck on September 11, 2001. Waxman sat with Rice in her office, watching television coverage of the first plane that hit the World Trade Center. He accompanied her to the White House Situation Room and then to a basement bunker where Rice, Vice President Dick Cheney, and, via phone, President George W. Bush discussed whether to order the Air Force to shoot down commercial jets still in the sky.

“Columbia Law has the best faculty for combining theory and practice in this field,” Waxman says. “No other law school has a deeper bench of full-time faculty who are not only great scholars in this area but also have spent time in government or as part of the national security policy process. That is one of the distinguishing features of our faculty, and it affects how we teach, the scholarship we produce, the professional development we offer our students, and the kinds of visitors we bring into our classrooms.”

“I bring guest practitioners to campus to spend time meeting with students to get into the details of issues and to discuss—not just in the abstract—what practicing in this field is like, including the ethical dilemmas that arise and the intense pressures that lawyers and policymakers come under,” Waxman says. “Because what makes this field both important and exciting are those dilemmas and pressures.”

For example, in a recent talk for students and faculty, Reeves recalled advising a field commander in Iraq—moments after a soldier had been killed by a roadside bomb—that the commander could not, legally, order a strike on a nearby car full of people as the facts did not support a lethal response. “You’ve got to be ready to get yelled at,” Reeves told the students. “Because the obligation of the lawyer in advising a command isn't only to the command but also to the Army and to the nation.”

Waxman says that national security law often requires lawyers to play different roles simultaneously: advocating for their institutional client or on behalf of the national interest, protecting values and fidelity to the law, and laying out the risks involved in different approaches to a problem. “And in many cases, there are going to be lots of risks no matter which way your client goes,” he says.

The National Security Law Program undertakes projects in scholarship, such as a recent partnership between the Law School’s Center for Japanese Legal Studies and the National Defense Academy of Japan, which produced Strengthening the U.S.-Japan Alliance: Pathways for Bridging Law and Policy. With the program’s support, students pursuing national security scholarship can draw on Columbia’s resources as a research institution, including legal historians and, outside of the Law School, the university’s political science and history faculty, the School of International and Public Affairs, and the Data Science Institute.

The program also has ongoing collaborations with the U.S. Military Academy, West Point, where Waxman helped found the Lieber Institute for Law and Warfare. And it hosts the JAG Scholars program, which Waxman founded to bring military lawyers to Columbia Law’s LL.M. program. The JAG initiative gives members of the Judge Advocate General’s Corps the opportunity to learn at a top LL.M. program, Waxman says, and it gives Columbia Law students the opportunity to study national security alongside those charged with implementing it.

“The JAG Scholars bring so much directly into our classrooms and our discussions,” Waxman says. “They obviously bring a wealth of professional experience. But they also often bring a different perspective. It’s one thing, for example, for a student to be opining in class about how the Geneva Conventions should be interpreted and another to have that conversation face-to-face with a military officer who has come back from a combat tour where he or she was doing that on the ground. And that’s the kind of theory-meets-practice that I work to create here at Columbia.”

The strong response from the U.S. and Europe to Russia’s invasion of Ukraine shows the power of international law, says the chair of Columbia Law School’s National Security Law Program.