Columbia Law School Taps Army Brigadier General (Retired) Richard Gross for a Joint Position in the Human Rights Institute and the Roger Hertog Program on Law and National Security
New York, May 25, 2016—The U.S. military’s former chief operational lawyer, retired Brigadier General Richard C. Gross, has been named a senior fellow at Columbia Law School.
Over an illustrious 30-year career, Gross served as counsel to the Chairman of the Joint Chiefs of Staff, legal advisor to U.S. Central Command, and judge advocate in the Joint Special Operations Command. He had multiple combat deployments to Iraq and Afghanistan, including a 13-month stint as the principal legal advisor to U.S. and NATO commander General Stanley A. McChrystal. During his last four years at the Joint Chiefs of Staff, Gross was the senior military member of the interagency lawyers’ group, which advised the National Security Council and cabinet-level officials on matters of national security.
Gross’s appointment at Columbia Law School—in both the Human Rights Institute and the Roger Hertog Program on Law and National Security—acknowledges the overlapping challenges in the application of international human rights law and international humanitarian law, or the law of armed conflict, which seeks to limit the effects of war. Shared areas of concern include counterterrorism practices and their impact on civil liberties; the protection of civilians in armed conflict; and the use of new technologies like drones, cyber-attacks, and autonomous weapon systems.
‘At the Center of Decision-making’
“General Gross has been at the center of decision-making and diplomacy on such cutting-edge issues as counterterrorism and cyber-warfare,” said Matthew Waxman, the Liviu Librescu Professor of Law and chair of the Roger Hertog Program on Law and National Security at Columbia Law School. Gross is the first fellow to serve in both the national security law program and the Human Rights Institute.
“Our programs have been collaborating on many intersecting issues, and we're excited for General Gross to be a part of that,” Waxman said. “Columbia has been an intellectual leader in these fields, and he'll add to our strength. We've also been sending many students into government or public interest careers in these areas, and our relationships with fellows like General Gross are a big reason why."
Over the last several years, Gross has been a frequent project contributor and guest lecturer at the Law School. In 2012, the Human Rights Institute asked him to serve on the steering committee of the Project on Harmonizing Standards for Armed Conflict. That effort, a collaboration with the International Institute for Strategic Studies in London, seeks to clarify and elevate legal standards in armed conflicts, extending the Geneva Conventions to all conflicts, not just wars between nation states.
“We needed people who understood in great detail how the law of arm conflict is applied on the ground in places like Afghanistan and Iraq,” recalled the project’s co-chair Sarah Cleveland, the Louis Henkin Professor of Human and Constitutional Rights and co-director of the Human Rights Institute at Columbia Law School.
“I recruited Rich, together with current and former military legal advisers from the U.K., Australia, the Netherlands, Canada, and elsewhere. Rich has been an indispensable and extraordinarily thoughtful member. A couple of years ago, he hosted a multiday meeting for our steering committee in the Pentagon.”
Gross’s areas of expertise dovetail with the work of the Roger Hertog Program on Law and National Security and the Human Rights Institute. Waxman, for example, is a leading authority on legal questions about the use of autonomous weapons, while Cleveland and Human Rights Institute co-director Sarah Knuckey have been involved in multiple projects to improve the investigation and compensation of civilian casualties in armed conflict. “Rich is interested in all of these issues, and he is extraordinarily knowledgeable,” Cleveland said.
When Gross completed his final tour of duty with the Joint Chiefs of Staff in September, Cleveland and Waxman invited him to Columbia Law School. “He was excited about continuing to work with us, and we were excited about the fact that he's a little more free now, both in time and in his ability to say what he thinks,” Cleveland said. “He's an exceptional asset to our programs.”
Perspectives from Inside Government
Waxman and Cleveland also have worked inside government. Waxman, an expert in national security and international law, served in senior positions at the U.S. State Department, Defense Department, and National Security Council during the George W. Bush administration. Cleveland, a noted authority on human rights and humanitarian law, was the counselor on international law to the legal advisor at the U.S. State Department from 2009 to 2011, when she helped supervise the office's work relating to the law of war, counterterrorism, and Afghanistan and Pakistan. She is currently an independent expert on the United Nations Human Rights Committee, and she is the U.S. member on the Venice Commission of the Council of Europe.
In 2013, the Roger Hertog Program on Law and National Security and the Human Rights Institute co-sponsored a daylong conference, “From Gettysburg to Guantanamo,” which marked the 150thanniversary of the Lieber Code, the world’s first attempt to codify the laws of war. Columbia University Professor Francis Lieber had drafted the code, and President Abraham Lincoln signed it into law in 1863. The Lieber Code deeply influenced the later Hague and Geneva conventions.
Cleveland invited Gross to that conference. In his keynote speech, Gross called the Lieber Code “absolutely one of the most important” humanitarian works in history, and that afternoon he moderated a panel on possible 21st century developments in the legal regulation of armed conflict. In the years since then, he has regularly lectured in Cleveland’s and Waxman’s classes, where he has offered both valuable insight and career guidance to students.
“Rich has played a really important role consulting with students who are working on research projects involving the law of armed conflict,” Cleveland said, “both in Matt’s and my classes, as well as in the Human Rights Clinic that Professor Sarah Knuckey teaches.” 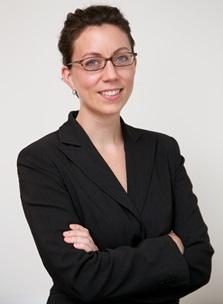 Knuckey (left), the Lieff Cabraser Heimann and Bernstein Clinical Associate Professor of Human Rights, directs the Human Rights Clinic at Columbia Law School. An international human rights lawyer and adviser to the U.N. special rapporteur on extrajudicial executions, she has carried out fact-finding investigations and reported on human rights and armed conflict violations around the world.
“General Gross has provided students in the Human Rights Clinic with advice from a military perspective about tactics for effective advocacy to government officials," said Knuckey. "With his help, students can better understand the interests and constraints of government actors, and can thus develop refined advocacy approaches to advance social justice."
‘Important and Unsettled’ Area of Law
“If you ask ten people who practice in this area how the law of armed conflict interacts with international human rights law, you’ll get ten different answers,” said Gross.
“It’s an area of the law that’s both important and unsettled. The rules are fairly clear in large-scale nation-state on nation-state armed conflict, but the rules start to blur in non-international armed conflict, or where it’s a nation state against a non-state actor. Some people then point to human rights law, some to the law of armed conflict; others frankly aren’t sure. There’s a lot of work to be done in determining where the two areas intersect and overlap, and complement or contradict each other.”
A graduate of West Point and the University of Virginia Law School, Gross has lectured at conferences and taught classes and participated in panels at a number of law schools, including Columbia, Harvard, Yale, Georgetown, Vanderbilt, and the University of Virginia.
As a senior fellow at Columbia Law School, he will participate as a guest lecturer in classes and in the Human Rights Law Clinic. He also will help design and participate in the national security law and human rights law programs, and assist in their collaborations with such institutions as the United States Military Academy at West Point and the Department of War Studies at King’s College, London. Gross will continue to mentor students interested in pursuing careers in national security and human rights law.
“I’ve really enjoyed all of my interactions with the amazing students at Columbia,” said Gross. “They ask hard questions, and are always well prepared, but the discourse is civil and fascinating. It’s been such a great experience that when Matt and Sarah mentioned this opportunity, I immediately said yes.”