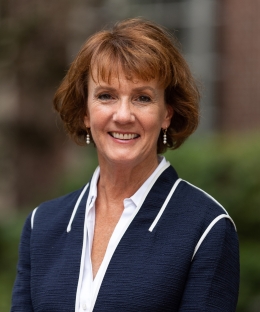 Sarah Cleveland is a noted expert in the areas of international law, U.S. foreign relations law, human rights, and national security. In addition to teaching, researching, and writing about these issues, she is a leading figure in these fields through her longstanding work domestically and with international legal organizations.

From 2009 to 2011, Cleveland served as the counselor on international law to the legal adviser at the U.S. Department of State and she remains a member of the Secretary of State’s Advisory Committee on International Law. She is faculty co-director of the Law School’s Human Rights Institute, is a member of the American Law Institute, and served as co-coordinating reporter of the American Law Institute’s Restatement (Fourth) of the Foreign Relations Law of the United States (2012–2018).

Cleveland began her legal career as a Skadden Fellow, representing migrant farmworkers in south Florida.  She previously served as a member of the board of editors of the International Review of the Red Cross. She was vice chair and a member of the U.N. Human Rights Committee (2015–2018) and was the U.S. observer member and member on the Venice Commission of the Council of Europe (2010–2019).

She has written widely on issues of international law, national security, and human rights, including the casebook Human Rights (2nd ed. 2009 and update 2013) and The Restatement and Beyond: The Past, Present, and Future of U.S. Foreign Relations Law, Paul Stephen and Sarah Cleveland, eds. (Oxford University Press, 2020).

Cleveland is a former Rhodes Scholar and served as a law clerk to U.S. Supreme Court Justice Harry Blackmun. Before arriving at Columbia in 2007, she was the Marrs McLean Professor in Law at the University of Texas Law School. She has held visiting professorships at Harvard and Michigan law schools and at the University Panthéon-Assas and Sciences-Po University in Paris.

Excellence in Teaching Award, University of Texas School of Law

From the Human Rights Institute: Responding to the Impacts of COVID-19

Sarah H. Cleveland Nominated as Legal Adviser of the U.S. Department of State

| The White House
In The Media