A collaboration between the Law School’s Center for Japanese Legal Studies and National Security Law Program, Strengthening the U.S.-Japan Alliance includes nine essays that examine the 1960 U.S.-Japan Security Treaty on its 60th anniversary. 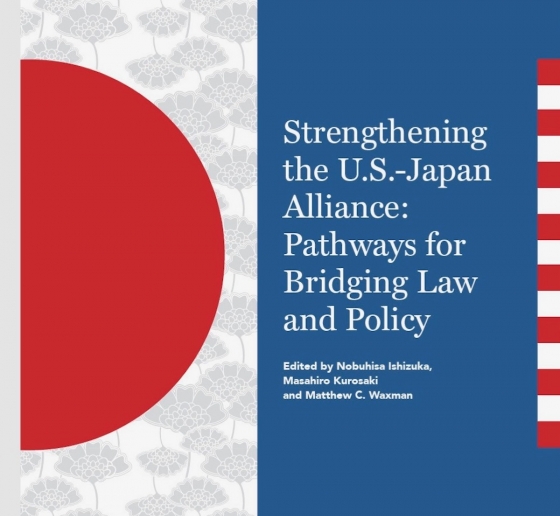 The U.S.-Japan alliance is a cornerstone of American foreign and defense policy in East Asia. “It’s critical to the security of the region,” says Matthew Waxman, Liviu Librescu Professor of Law and faculty chair of the Law School’s National Security Law Program. “To understand how the U.S.-Japan alliance operates in practice, it’s important for Japanese experts, policymakers, and academics to understand better how the U.S. legal system operates and, in turn, for their American counterparts to better understand how the Japanese legal system works.”

In 2017, Waxman initiated a joint project with the National Security Law Program, the National Defense Academy of Japan, and the Law School’s Center for Japanese Legal Studies, the only center of its kind in the United States. “It’s extremely useful for a project such as this to have the resources of an institution like Columbia Law School,” says Waxman. “We have scholars of American and Japanese law and domestic and international law, and we can partner with institutions such as the Japanese National Defense Academy and can use its convening power to bring together experts not just from academia but from the U.S. and Japanese militaries and governments.”

The three-year project convened experts for a series of workshops in New York and Tokyo. Takako Hikotani, a political scientist at Columbia University’s Weatherhead East Asian Institute, introduced Waxman to key players in Japan and to important ideas on the initial stages of the project. The result is a new book, Strengthening the U.S.-Japan Alliance: Pathways for Bridging Law and Policy, which was edited by Waxman; Lecturer in Law Nobuhisa “Nobu” Ishizuka CC ’82, LAW ’86, executive director of the Center for Japanese Legal Studies; and Masahiro Kurosaki, director of the study of law, security, and military operations at the National Defense Academy of Japan.

Ishizuka describes the 1960 security treaty as an amendment to the 1952 U.S.-Japan Security Treaty and a watershed in Japan’s postwar history: It made the United States responsible for Japan’s defense, enabling Japan to focus on its reemergence as an economic powerhouse in the 1970s and 1980s. “Japan’s constitution renounces war as an instrument of national policy and prohibits the maintenance of armaments and use of force,” says Ishizuka, explaining the country’s dependence on the United States. Nonetheless, Japan has built up a formidable military over the years as the government has reinterpreted the constitution. “It allows Japan to use force in individual and collective self-defense in narrowly defined terms,” says Ishizuka.

Waxman and Ishizuka say the tension that has resulted from security issues between the two countries boils down to a fundamental question: How might differing approaches to the use of force and understandings of the use of individual and collective self-defense adversely affect the alliance between the United States and Japan? The nine chapters in Strengthening the U.S.-Japan Alliance address this crucial question from multiple perspectives. They include Waxman’s paper “Presidential Use of Force in East Asia: American Constitutional Law and the U.S.-Japan Alliance” and Kurosaki’s paper “Legal Frameworks on Japan’s Self-Defense With the United States.”

The initial printing of the book is being sent to many academics, policymakers, practitioners, and government officials in the United States and Japan. (The book is available for free online.) “It’s intended by design to be very practical,” says Waxman.

Waxman hopes the National Security Law Program will collaborate with the Center for Japanese Legal Studies on more projects. “It was very exciting to get to work with Nobu,” he says. “I hadn’t previously seen points of overlap with Nobu’s center. But we realized there is a natural intersection of our academic interests.”

Ishizuka echoes the sentiment: “One can envision another volume on a different aspect of the relationship that builds on this one,” he says. “It’s a very fertile area, and there are a lot of potential topics to explore.”