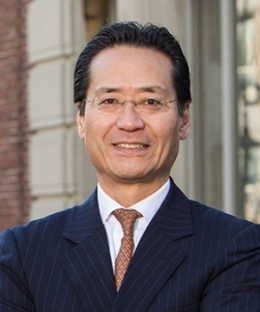 Nobuhisa Ishizuka is Executive Director of the Center for Japanese Legal Studies at Columbia Law School, which has been an intellectual hub between the U.S. and Japan for over 40 years. He oversees the Center's programming and strategy and promotes scholarly exchanges between faculty and practitioners in the field.

Prior to joining the Center he was a Partner of Skadden, Arps, Slate, Meagher & Flom LLP, where he advised on corporate and financial matters, with a focus on mergers and acquisitions and corporate finance. Several of his transactions have been cited by leading financial and business law publications for their innovation or as “Deals of the Year”.

During his time in practice, Mr. Ishizuka had been regularly recognized as a leading individual in Chambers Asia-Pacific and Chambers Global, and as a leading lawyer in IFLR1000: The Guide to the World’s Leading Financial Law Firms, Asia Pacific Legal 500 and Best Lawyers in Japan.  He has published in Columbia Law Review, Commercial Law Review, and other legal publications.

Mr. Ishizuka has a B.A. from Columbia College and a J.D. from the Columbia University School of Law, where he was a Senior Editor of the Columbia Law Review. He was a graduate research student at the University of Tokyo, where he currently teaches international business law. He is a member of the Board of Visitors at Columbia Law School, the Board of Visitors of Columbia College, a Fellow of the American Bar Foundation and is a member of the Executive Committee of the Board of Directors of the Japanese American Association of New York.

Mr. Ishizuka is a member of the Council on Foreign Relations and the New York and Washington D.C. Bars.