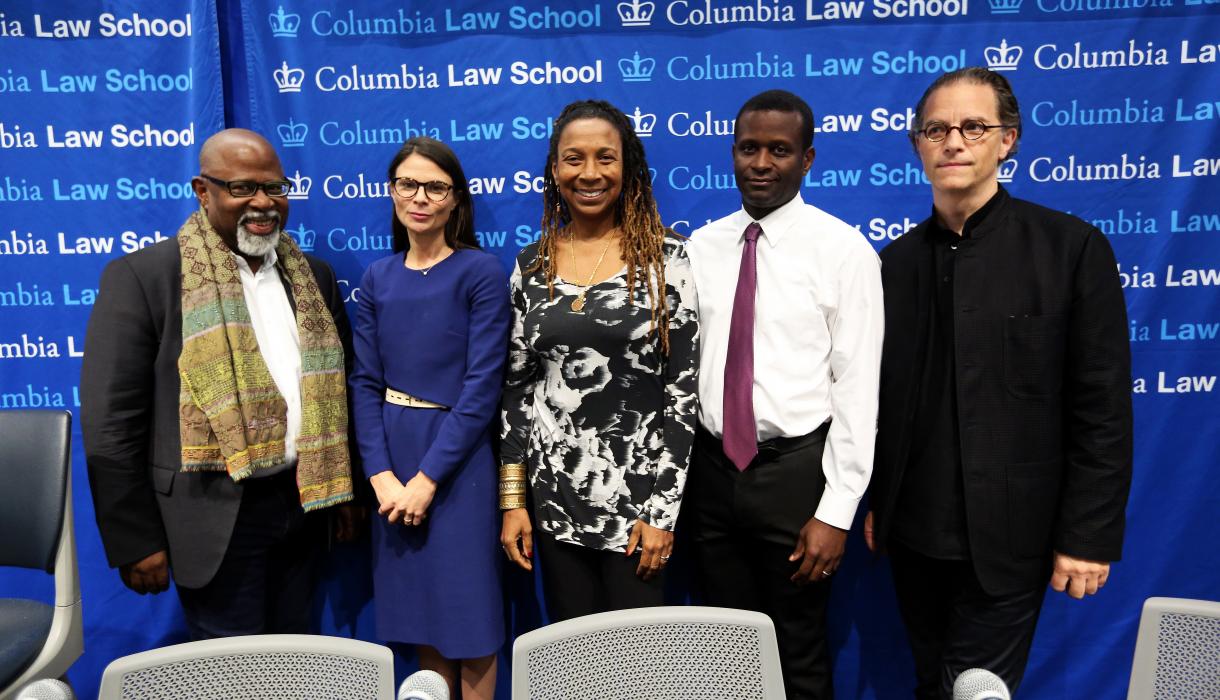 Columbia Law School professors with expertise in legal history, constitutional law, racial and environmental justice, and civil and human rights gathered this fall for three public discussions on the unremitting ramifications of slavery on the United States. The series of standing-room-only events was inspired by The New York Times’  landmark 1619 Project, which aimed “to reframe the country’s history, understanding 1619 as our true founding and placing the consequences of slavery and the contributions of black Americans at the very center of the story we tell ourselves about who we are.”

Professor Kimberlé Crenshaw moderated the kickoff event, “A Conversation About the Place of Slavery in American Law.” The panelists—Professors Maeve Glass ’09, Kendall Thomas, Jamal Greene, and Bernard Harcourt—each introduced legal “artifacts” to illuminate the institutionalization and aftershocks of slavery.

Crenshaw's artifact was the 1855 Missouri case In Re Celia, which she said represented the legalized sexual assault of black women in a system dependent on appropriating reproductive labor for "domestically produced" property. In Celia, an all-white male jury convicted a 19-year-old female slave for murdering her owner who had held her in bondage since she was 14 and sexually assaulted her, which resulted in two children who were, of course, the property of their white father. The court denied her claim of self-defense, and she was executed by hanging.

Crenshaw said that the legacy of Celia is relevant for today’s conversations about reparations and criminal justice (black women are less likely than white women to have their accused assailants arrested, charged, and prosecuted). “What might reparations look like if the sexual reproduction of black women’s productive capacity were in fact seen as a central dimension of the project of slavery?” she asked.

Glass's artifact was a 1662 Virginia statute that, she said, first codified the enslavement of human beings:

Whereas some doubts have arisen whether children got by any Englishman upon a Negro woman should be slave or free, be it therefore enacted and declared by this present Grand Assembly, that all children born in this country shall be held bond or free only according to the condition of the mother . . .

Glass said that this sentence—a reversal of English family law in which status followed the father—changed the course of American history. “There, in the brutal quiet simplicity of the language of the law, lay the central legal principle that would allow for American slavery to take root and flourish across the scope of the 19th century,” she said. “The driving engine of slavery that emerged not from ships from abroad, but in the quiet daily rules that allowed for the promise that a child born to an enslaved woman would belong to her white master.”

Thomas’s artifact was a familiar one—the canonical decision in Brown v. Board of Education that found school segregation unconstitutional. He said that Chief Justice Earl Warren’s opinion, however, sidestepped the essential history of racist educational policy that is rooted in state laws that forbade slaves and free blacks from assembling to learn how to read and write. “The criminalization, if you will, of learning while black illuminates important aspects of our legal regime and the ways in which race, racism, and education are still connected,” said Thomas.

After presentations by Greene and Harcourt, and conversations centered on criminal and Constitutional law, a hush descended upon the auditorium when Glass quoted James Baldwin, who wrote in a 1965 essay: “The record is there for all to read— it might as well be written in the sky.” What would happen, Glass wondered, if that record were not written in the sky but on the walls around us? “What would happen if, alongside the Constitution, we had the long history that came behind the Constitution?”

Domestic Refugees
Professor Katherine Franke’s latest book, Repair: Redeeming the Promises of Abolition, was the subject of the second panel featuring the author and Professors Sarah Cleveland and Olatunde Johnson. “Abolishing slavery did not make black people free,” said Franke, explaining that reparations were essential so former slaves could become literate, own property, and control their own destinies.

Franke told the story of a community of 15,000 enslaved people on the sea islands of South Carolina who were freed when Northern troops arrived in July 1861, 18 months before the Emancipation Proclamation and nearly four years before the 13th Amendment was ratified. “Today, we would call them refugees, but we did not have that term then,” said Franke. “When the military officials asked the newly free people what they wanted, they said, ‘We want to own the land we have worked for generations. Our people are buried here. Our children were born here. This is where we belong. We want this land, and we want you to leave. We want to start healing ourselves, by ourselves, in a place we call home.’”

For a brief period, the freed slaves were landowners. But when Andrew Johnson succeeded Abraham Lincoln as president in 1865, he granted amnesty to Confederate soldiers if they pledged an oath of loyalty to the United States. In exchange, all of their property—except for their slaves—would be returned to them. “So all this land was forcefully and violently taken away from people who were planting corn, wheat, and crops they could eat [as opposed to] cotton—a crop they could not eat, a crop they said they wanted nothing to do with,” she said. Many of the former slaves had no choice but to pick cotton once more if they were going to survive. “They were forced into labor contracts with the people who owned them before.” Franke continued, “That’s what it means to be freed, but not free.”

Environmental Oppression
Zora Neale Huston’s posthumously published Barracoon: The Story of the Last “Black Cargo,” a nonfiction account of the enslaved Africans who were illegally smuggled into the United States 50 years after the transatlantic slave trade was outlawed, was the inspiration for the third panel, “The Legacy of Slavery in the Struggle for Environmental Justice: From Africatown to Harlem.” After gaining their freedom, some members of the group created an intentional community known as Africatown in Mobile, Alabama.

“They pooled resources and bought the land from the ship captain and his family that brought them over from Africa,” explained Alexis Hoag, lecturer-in-law and the inaugural Practitioner-in-Residence at the Eric H. Holder Jr. Initiative for Civil and Political Rights, who moderated the panel with Professor Glass and Charles Callaway, the senior community organizer for West Harlem Environmental Action (WE ACT for Environmental Justice).

Hoag, who co-taught Abolition: A Social Justice Practicum at the Law School this fall, led a discussion on how redlining and zoning laws (or lack thereof) marginalized vulnerable communities. She explained that Africatown was thriving when paper mills and other industries were built on surrounding lands in the early 20th century. “Over time [the factories] started to pollute the community,” said Hoag, emphasizing the linkage between the illegal importation of slaves and the environmental harms the community continues to experience today. “This is a not unusual sort of occurrence in terms of the proximity of toxic harms to predominantly African-American and brown communities.”

Calloway addressed how the history of structural racism has contributed to environmental injustice in West Harlem, a neighborhood whose residents are primarily persons of color. They have had to endure three polluting facilities along the Hudson River in their neighborhood: a waste transfer station, a sewage treatment center, and a natural gas meter station. “It’s a situation that doesn’t only happen in New York City,” he said. “It happens around the world, around the country. If you look at a marginalized community, you will find that right next door, not two miles away, there’s always a polluting facility.”

Dean of Students Yadira Ramos-Herbert, who organized the series with Professor Olatunde Johnson, said the series allowed the Law School to come together as a community to critically examine the lasting impact of slavery. “We’re extremely fortunate at Columbia Law School to have access to incredibly respected legal scholars, legal historians, and practitioners,” said Ramos-Herbert. “They not only guided us through honest and thought-provoking conversations but also asked us to consider the ways we can continue to work to bring justice to communities impacted by the legacy of slavery.”

About the Series
The 1619 programs were part of the Lawyers, Community, and Impact series. It was organized by Ramos-Herbert and Johnson along with Vice Dean for Intellectual Life Bert Huang, the Center for Intersectionality and Social Policy Studies, Empowering Women of Color, Columbia Journal of Race and Law, Black Law Students Association, Center for Constitutional Governance, the Eric H. Holder Jr. Initiative for Civil and Political Rights, and the Clifford Chance Thought Leadership in Diversity.