On April 18, a panel of federal judges awarded the prize for top oralist to Aneesa Mazumdar ’22 and best final round brief to Alison Hung ’22.

The event had all the eager expectation and seriousness of a real court proceeding—right down to the oyez: For the first time in three years, judges, competitors, and audience members gathered in person for the Harlan Fiske Stone Moot Court Competition finals. Room 104/106 in Jerome L. Greene Hall was packed as four Columbia Law School students argued before a panel of federal judges over the limits of the authority of federal bankruptcy courts. (Watch the finals above.)

The case, written by Harlan Fiske Stone Moot Court Co-Directors Caleb Smith ’22 and Mason Walther ’22, was inspired in part by the real-life efforts of the Sackler family, which owns opioid maker Purdue Pharmaceutical, to secure—within the bankruptcy proceedings of its company—a release that would protect the family from civil lawsuits.

Ninoslav “Nino” Kucan Dickersin ’23 and Aneesa Mazumdar ’22 represented Unsecured Creditors’ Committee, which included a group of landlords who claimed the technology destroyed their property values. Hasseldorf successfully sought a release from the claims against him, a move that would allow the company to reorganize with funding from Hasseldorf and continue developing affordable housing. Unsecured Creditors’ Committee opposed the release, arguing the bankruptcy court didn’t have the authority to grant it.

The student litigators presented their arguments before a distinguished panel of federal judges:  Judge Joseph A. Greenaway Jr. CC ’78 of the 3rd Circuit, Judge Barbara Lagoa ’92 of the 11th Circuit, and Southern District of New York Chief Bankruptcy Judge and Adjunct Professor of Law Martin Glenn.

Dickersin and Hung argued the constitutional question in the case—whether a bankruptcy judge has the power consistent with Article III of the Constitution to grant a non-consensual release of a non-debtor—while Chusid and Mazumdar focused on the statutory argument of whether such a release is allowed under the U.S. Bankruptcy Code.

Dickersin got things started, arguing that Unsecured Creditors’ Committee has “a constitutional right, fundamental to notions of justice, to have [its] case heard in a traditional court.”

But opposing counsel Hung told the judges that the bankruptcy courts were designed to preclude certain claims in light of the broader need for a system to efficiently resolve bankruptcy cases.

“Every bankruptcy works as an impairment on some party’s rights,” she said. “That is the whole point of the bankruptcy system.”

The judges pressed Hung on the limits of such a release.

“Let’s assume the claims against Hasseldorf are that he is a serial sexual harasser,” Glenn said, “and he’s willing to pay $100 million to the plan if he gets a release.”

Hung replied that “just because a bankruptcy court has the constitutional authority to take a certain action doesn’t mean that it always will or it always should.”

Taking the podium for Unsecured Creditors’ Committee on the statutory question, Mazumdar argued that her clients could receive more money if they were able to sue BFH directly.

“The claims are more than $5 billion,” Glenn said. “There’s nothing in the record to suggest Hasseldorf has anywhere near that in assets.”

When Lagoa pointed out that Hasseldorf had testified he would fight the litigation with all his resources, Mazumdar said she wasn’t sure how he could do that and continue to live his “lavish lifestyle.”

Like Hung, Chusid faced tough questions about the release. In response, he pivoted to the intentions of Unsecured Creditors’ Committee.

“They’re not seeking to get the most money,” he said. “They’re seeking to drive [the company] out of business to ensure nobody else seeks to compete with them again.”

After the arguments, the judges left the room to deliberate before returning with the results: Mazumdar was awarded the Lawrence S. Greenbaum Prize for best oral presentation, and Hung won best final round brief.

The judges had nothing but praise for the competitors.

“You certainly all lived up to the hype,” Greenaway said.

“You guys are the cream of the crop,” Lagoa added. “Not everyone can get up in front of a hot panel and answer questions and do it so flawlessly and seamlessly.”

Glenn also praised the case itself: The release issue “is probably one of the longest-standing circuit splits that the Supreme Court has so far managed to avoid having to grapple with, and it’s obviously very topical in light of the Purdue case,” he said.

The co-directors came up with the idea after Walther’s sister told him about an NPR story she’d heard about the Purdue bankruptcy. “From there, it was a process of extracting the controversial mechanism and constructing a world around it that could lead to plausible victories for any side,” Walther said.

Smith added that it was “incredibly satisfying” to watch the case come to life.

The three-round Harlan Fiske Stone Moot Court competition began in the fall, with 16 students advancing to the semifinals. After the competition, Gillian Lester, Dean and Lucy G. Moses Professor of Law, thanked the judges, the students, and everyone who helped put the program together, including Director of Legal Writing and Moot Court Programs Sophia Bernhardt and the moot court board. In addition to Smith and Walther, this year’s board includes Harlan Fiske Stone Executive Director Sue Su ’22, Foundation Moot Court Director Lilian Klatskin ’22, and Specialized Moot Court Director Brandon Weber ’22.

After the event, Hung said she was “surprised and grateful” to win best brief, noting that the “quality of the competitors and the briefing throughout the competition was so high.” Overall, she said, “It was a great experience—one that will always stay with me as I begin my career as a litigator.”

Mazumdar said she was “incredibly nervous” at the start.

“Once the judges began asking me questions, I felt much more comfortable settling into my argument,” she said, adding that she was surprised to win the Greenbaum prize. “Nino, Alison, and Parker all did such a wonderful job.”

Learn more about the finalists below. 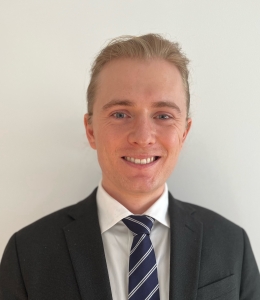 “There’s a skill set that moot court develops that I really value,” says Parker M. Chusid ’23, “written and oral argumentation that is clear and compelling.” Read more about Chusid. 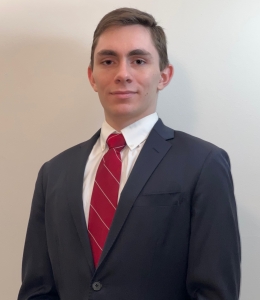 “I’m very proud of the brief I created,” says Ninoslav Kucan Dickersin CC ’20, LAW ’23. “I think it’s one of the—if not the—best pieces of writing that I’ve produced while I’ve been here, and that is fully a function of the nature of the competition.” Read more about Dickersin. 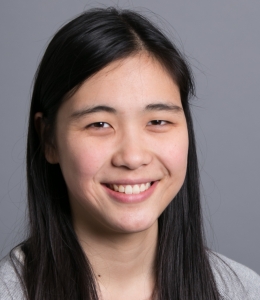 “Just do it and jump into it, even if it terrifies you,” says Alison Hung ’22. “I think that is valuable in and of itself, and sometimes it works out. You might even surprise yourself.” Read more about Hung. 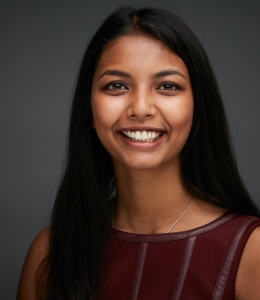 “You want to win on the specific legal points,” Aneesa Mazumdar ’22 says. “But it’s also about presenting this broader story of fairness—of equity—and trying to explain why, on a big-picture level, your client’s story is ultimately more compelling.” Read more about Mazumdar.