This year’s case is Unsecured Creditors’ Committee v. Better Future Housing Co. The final will take place on April 18. Dickersin will be arguing on behalf of the appellant. 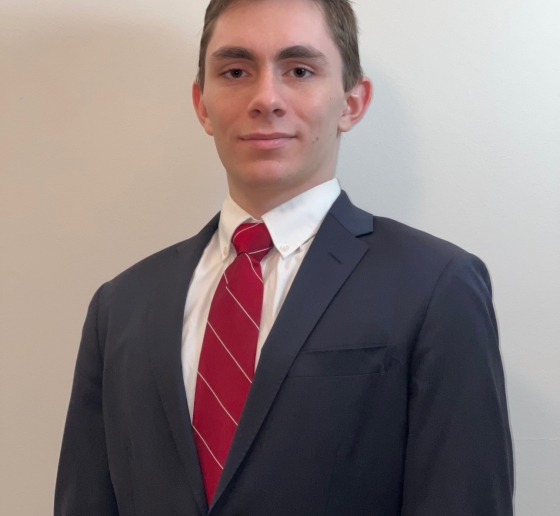 Three judges preside over the Harlan Fiske Stone Moot Court Competition finals. Luckily, Ninoslav Kucan Dickersin CC ’20, LAW ’23 (who goes by Nino) is used to presenting his case. As a student prosecutor at the New York City Taxi and Limousine Commission last summer, Dickersin handled more than 100 administrative hearings against cab drivers and owners. He prepared witnesses for testimony, collected evidence, and delivered closing arguments in the cases, which are presided over by hearing officers through the city’s Office of Administrative Trials and Hearings.

“It was a fantastic internship,” he says.

It was also good preparation for the Harlan Fiske Stone Moot Court. Throughout the mock appellate competition, Dickersin has argued on behalf of the appellant: a creditors’ committee seeking to prevent a bankruptcy court from releasing an affordable-housing developer from liability. Dickersin says he was “terrified” when he first saw the issues in the case since he didn’t have experience in bankruptcy law.

But he has grown comfortable with the facts and relevant case law. “I’m very proud of the brief I created,” he says. “I think it’s one of the—if not the—best pieces of writing that I’ve produced while I’ve been here, and that is fully a function of the nature of the competition.”

Dickersin, who grew up in New York City, first practiced oral advocacy when he was captain of the Policy Debate team at Stuyvesant High School. At Columbia College, he studied political science and economics, topics he was drawn to in part because of the impacts of the 2007–2009 recession. “I saw the really disastrous effects it had on everyone—my friends, their families, my family,” he says. “And I wanted to understand: Why did this happen?”

Dickersin thought about going into politics, but after knocking on doors for 2016 Democratic presidential candidate Hillary Clinton, he realized he didn’t enjoy campaigning. An undergraduate international law course steered him toward Columbia Law School. “That was my first real introduction to what it was like to study law,” he says. “It really confirmed for me that this is what I want to do.”

“I’m very proud of the brief I created. I think it’s one of the—if not the—best pieces of writing that I’ve produced while I’ve been here, and that is fully a function of the nature of the competition.”
—Ninoslav “Nino” Kucan Dickersin CC ’20, LAW ’23

At Columbia Law, Dickersin gained advocacy experience in the Foundation Year Moot Court program. He credits his Legal Practice Workshop with Joel Kosman and his Constitutional Law class with Philip Hamburger, Maurice and Hilda Friedman Professor of Law, with preparing him for the substantive issues in the Harlan Fiske Stone case as well as the oral and written components of advocacy. The research and writing skills he honed participating in moot court will serve him well beyond the competition, he says—beginning this summer when he will be working at Sullivan & Cromwell.

“I think [those skills] are going to be incredibly useful in my practice,” Dickersin says. “I’m more confident that, if I come up against an issue I have no understanding of, I’m going to be able to dive in and do the research.”