The Academic Side of RBG 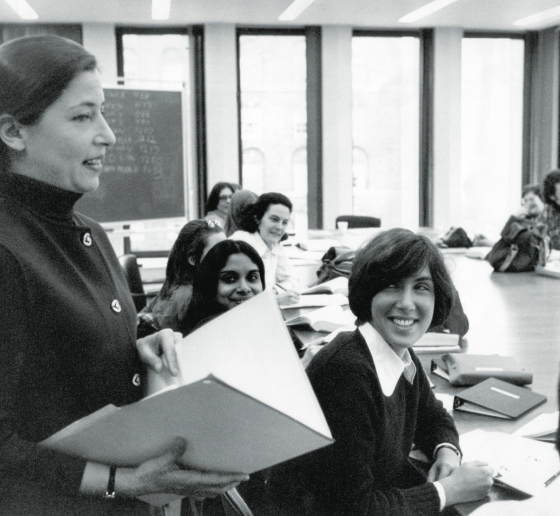 Above: Ruth Bader Ginsburg ’59 encourages students in her Columbia Law seminar on sex discrimination law to assist her in preparing to argue on behalf of the ACLU Women’s Rights Project before the U.S. Supreme Court.

Throughout her career, U.S. Supreme Court Justice Ruth Bader Ginsburg ’59 maintained a special bond with Columbia Law School. After graduating tied for first in her class, she became the first female tenured professor at the Law School and, later, as a judge, hired more than two dozen Columbia Law School graduates to serve in her chambers as law clerks (many of whom went on to become leaders in the legal profession). She also returned to campus for special events over the years, including one last time in 2018 for a celebration of the 25th anniversary of her investiture to the Supreme Court.

“If you are a true professional, you will use your degree to make things a little better for other people.”
—Justice Ruth Bader Ginsburg speaking at a 2018 event on impact litigation at Columbia Law School, about why students should devote at least part of their careers to public service

Ruth Joan Bader receives her B.A. in government with high honors from Cornell University. As a freshman she meets her future husband, Martin D. Ginsburg, and they marry immediately after her graduation. Daughter Jane is born the following year. (Today, Jane C. Ginsburg is Columbia Law’s Morton L. Janklow Professor of Literary and Artistic Property Law.)

Ginsburg and her husband attend Harvard Law School, and she serves as an editor of the Harvard Law Review.

A Move to Morningside

After completing her first two years of law school at Harvard, Ginsburg transfers to Columbia Law School when her husband takes a job in New York City. She serves as an editor of the Columbia Law Review, earns her L.L.B. in 1959 as a Kent Scholar, and ties for first place in her class.

Rejected by all the law firms she applied to, Ginsburg is encouraged by Columbia Law Professor Gerald Gunther to apply for a clerkship with U.S. District Judge Edmund L. Palmieri of the Southern District of New York, which she gets. “For women of my generation, the challenge was to get that first job because most legal employers wanted no lady lawyers,” Ginsburg said in 2018.

Columbia Law Professor Hans Smit ’58 hires Ginsburg as a researcher and associate director at Columbia’s Project on International Procedure. She travels and lives in Sweden for a period of time. She researches and eventually co-authors a book (1965)  on Swedish civil procedure.

Ginsburg teaches at Rutgers Law School, where she is the second woman to join the law faculty, and earns tenure in 1969. She begins working with the ACLU on discrimination cases including Reed v. Reed, which in 1971 is the first gender-based statute to be struck down on the basis of the equal protection clause. (It struck down a law giving preference to men in administering estates.)

Ginsburg joins the faculty of Columbia Law School and becomes the institution’s first female tenured professor. She introduces the Law School’s first Sex Discrimination Law course and seminar, training future women’s rights advocates. Ginsburg also publicly responds to the university president’s insinuation that she was hired through affirmative action and fights the university when it lays off 25 female maids but not a single male janitor. During this time, she also co-authors the first law school casebook on sex discrimination.

Fighting for Women’s Rights From the Classroom

While teaching at Columbia Law, Ginsburg founds the ACLU Women’s Rights Project to pursue impact litigation on gender discrimination. She argues six cases before the Supreme Court and wins five, including Weinberger v. Wiesenfeld (1975), which provided Social Security benefits to widowers as well as widows, and Frontiero v. Richardson (1973), which allowed women serving in the military to claim their husbands as dependents.

Ginsburg is appointed by President Jimmy Carter to the U.S. Court of Appeals for the District of Columbia Circuit and resigns her position on the faculty at Columbia. In 1993, President Bill Clinton nominates Ginsburg to the U.S. Supreme Court. She is confirmed in the Senate by a vote of 96-3 and becomes the second woman to sit on the court. In a letter to the president recommending Ginsburg, former president of Columbia University Michael I. Sovern wrote, “She would, put simply, make the Court as an institution look good.”

Honored by the Law School

Ginsburg is presented with Columbia Law School’s highest honor, the Medal for Excellence, awarded since 1964 to alumni and faculty who exemplify the qualities of character, intellect, and social and professional responsibility that the Law School seeks to instill in its students.

Ginsburg writes the majority opinion in United States v. Virginia, which struck down the Virginia Military Institute’s long-standing male-only admission policy. In a 2012 appearance at Columbia Law School, Ginsburg would call it “a very special case for me. It was a sign of the changing times, it was the U.S. that brought the case. We were no longer the opponent, but the proponent.”

Ginsburg visits Columbia several times in the 2000s and 2010s. On September 12, 2003, Columbia Law School celebrates the 10th anniversary of her appointment to the Supreme Court. The event includes a set of panels with world-renowned legal experts as well as a lunchtime address by Justice Stephen G. Breyer.

Inspiring the Next Generation of Columbia Law Leaders

In 2012, Columbia Law School’s Center for Gender and Sexuality Law hosts a conference recognizing the 40th anniversary of Ginsburg’s joining the Columbia Law School faculty as well as her contributions to the law of gender-based justice and equality.

She Opened the Door

In 2018, Ginsburg headlines “She Opened the Door,” the first Columbia University–wide Women’s Conference.

In an interview with CNN anchor Poppy Harlow CC ’05, Ginsburg brings down the house when she answers Harlow’s final question: “Help me finish this sentence: ‘There will be enough female justices on the Supreme Court when there are____’”

Without missing a beat, Ginsburg replies, “You know the answer. When there are nine, of course.”

It’s Been an Honor, Your Honor

In September 2018, Ginsburg returns one last time to Columbia Law School for a celebration of her investiture to the Supreme Court. When asked about the most difficult case she had to decide during her years on the Supreme Court, she says that all death penalties cause her “tremendous anxiety,” especially the 11th-hour stays. “If I were a queen, there would be no death penalty,” she says. Her remark makes the news. Dean Gillian Lester later presents Ginsburg with a lace collar commissioned by the Law School and made of tiny interlocking 25s to mark the anniversary.

Ginsburg dies September 18, 2020, and lies in repose at the Supreme Court. She was 87. The following week, Columbia Law School announces the creation of an endowed professorship in honor of Ginsburg along with two new scholarships in her name. The professorship was established through the generosity of a committed group of Law School alumni and supporters, including University Trustee Emerita Esta E. Stecher ’82, Ginsburg's former clerk Elizabeth Glazer ’86 and her husband Bill Montgomery ’86, former clerk Bill Savitt ’97, and the law firm Wachtell, Lipton, Rosen & Katz. Says Stecher, “She inspired me and so many of my classmates in our pursuit of the law as a career. She showed us what was possible.” 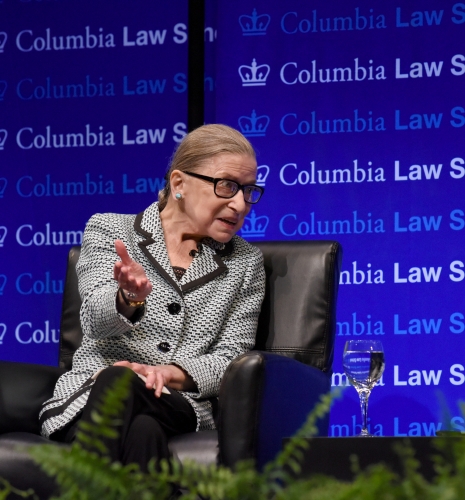 Pictured: Ginsburg responds to a question from Columbia Law School Dean Gillian Lester in a 2018 conversation as part of a day-long celebration of the 25th anniversary of Ginsburg’s investiture to the Supreme Court.

The revered Supreme Court justice maintained deep ties throughout her life to Columbia Law School, where she graduated tied for first in her class and later became the first woman to be a tenured member of the faculty.