What is cruel and unusual? 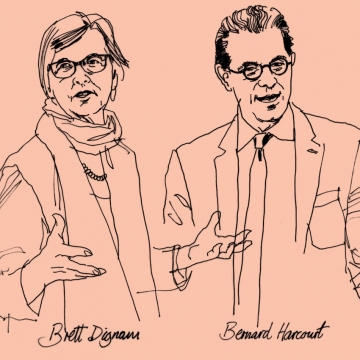 Professor Robert Ferguson wrote that U.S. prisons are “harsher than those in any but totalitarian countries” in his seminal book, Inferno: An Anatomy of American Punishment. He quoted U.S. Supreme Court Justice Anthony Kennedy, who bemoaned in a speech to the American Bar Association that allowing a penal system “to degrade or demean individuals is not acceptable in a society founded on respect for inalienable rights of the people.”

These concerns are at the heart of separate cases taken up by Columbia Law Professors Brett Dignam and Bernard E. Harcourt on behalf of individuals in solitary confinement and on death row. Working with teams of students, they have raised challenges to practices they argue are unconstitutional and inhumane.

In 2018, Harcourt tried to stop the execution of Alabama inmate Doyle Lee Hamm, whom he has represented pro bono since 1990. He submitted detailed medical evidence to demonstrate that cancer and intravenous drug use had compromised Hamm’s veins and that attempting to perform a lethal injection would be “barbaric” and violate the Eighth Amendment’s prohibition of “cruel and unusual punishment.” Harcourt was proved right: The execution attempt was halted after Hamm was subjected to more than two hours of bloody prodding.

Similarly, solitary confinement is tantamount to torture, according to research by Dignam and students in the Challenging the Consequences of Mass Incarceration Clinic, which she directs. They are representing Richard Reynolds, who had been living in “extreme isolation” on death row for 21 years when, in 2016, the Connecticut Supreme Court upheld the state’s 2012 abolition of capital punishment. As a result, he was later resentenced to life imprisonment but subjected to a new statute that mandated permanent solitary confinement. In April 2019, five clinic students argued in U.S. District Court for the District of Connecticut that Reynolds’s treatment violates the Eighth Amendment, the 14th Amendment, and the Constitution’s ex post facto clause.

“The legal claims are complicated,” says Dignam, “but our immediate goal was to get him out of solitary and into the general prison population.”

“If I were a queen, there would be no death penalty.” —U.S. Supreme Court Justice Ruth Bader Ginsburg ’59, at Columbia Law School, September 21, 2018

“The victims’ families have been told their catharsis is going to come from punishment. And it’s just cruel, because it doesn’t.” —Clive Stafford Smith ’84, author of Injustice: Life and Death in the Courtrooms of America, in The Guardian

Next: Release and Reentry