Imprisoned after Turkey’s failed coup in 2016, Akkasoglu is dedicating himself to the work of ensuring data privacy is a human right. 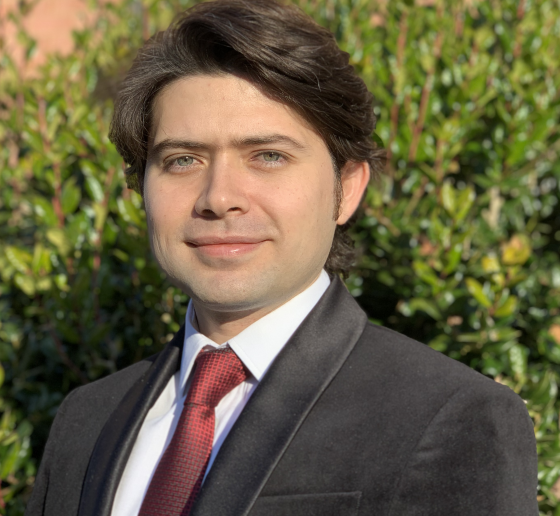 In 2016, after a failed coup against his government, Turkish President Recep Tayyip Erdogan fired more than 130,000 people and arrested 50,000—including lawyers, academics, and journalists—in a massive purge of professions that Erdogan deemed a threat to his administration.

One of those imprisoned was Nevfel Akkasoglu, then a 27-year-old lawyer and Ph.D. student teaching at Ankara Hacı Bayram Veli University. He was jailed for 14 months; his alleged offenses consisted of a deleted tweet and having on his phone (as did hundreds of thousands of other people) an encrypted messaging app. When he was released for trial, he fled the country. Banned from travel, he and his wife, Kimya, slipped across the mountainous border into Georgia, carrying only backpacks.

“It was dangerous and our first and last hope for freedom,” he says.

Today, Akkasoglu is an LL.M. candidate at Columbia Law School studying cybersecurity and data privacy law. With Kimya and their new baby boy, David Bera, he is living in Morningside Heights as one of 18 inaugural recipients of the Scholarship for Displaced Students, created and administered by the Columbia Global Centers.

“I learned firsthand the value of the rule of law by experiencing the lack of it,” he says.

In prison, his cellmates were judges, lawyers, and university professors. “I had time to think about myself, my passions, and what I really want, what I really care about, what are my priorities,” he says. “When you are vulnerable, you learn much more than when you are strong.”

Akkasoglu had been working toward a doctorate in corporate and bankruptcy law in Ankara. As a teaching assistant at Ankara Yildirim Beyazit Law School, he taught corporate and commercial law, supervised student projects, and coached moot court teams. His book, Subordination Agreement in Turkish Law, came out in 2018. (It was accepted for publication before he left Turkey.)

During his detention in Turkey, Akkasoglu found to his dismay that legal expertise about social media and data privacy was rare. “I had to learn a lot of things about the technology and the internet so that I could make my own defense in the court,” he says.

“When you are vulnerable, you learn much more than when you are strong.”

That experience led to his decision to spend his LL.M. year focusing on privacy and cybersecurity. “It is something that’s very personal, and I have a lot of insight” into the subject, he says.

Data privacy is a human rights issue, Akkasoglu believes, and it is relevant in areas from the lengthy terms of service agreements (which consumers agree to often without knowing what they say) to the “right to be forgotten” in European online privacy law (which allows individuals to request removal of personal information from the internet under some circumstances). In the United States, which lacks similar regulation, he says, “There should be fundamental human rights regulation so that you have robust legal protection of your privacy.”

After fleeing Turkey, Akkasoglu landed in Virginia, where he received political asylum and worked at “survival” jobs in a warehouse and kitchen cabinet shop. On his way to work, he listened to Voice of America podcasts about U.S. history.

“I was curious about the history of this new land, the country where I would maybe spend the rest of my life,” he recalls. “One of the podcast speakers was Akhil Amar, the constitutional law professor, who explained the spirit of the Constitution. His knowledge and passion really impressed me. I listened to that podcast series many times. I thought it would be great to be a student of that professor. And now, thank God, I’m taking his [American] Constitutional Law course at Columbia Law School. Beyond words.”

Akkasoglu’s entire LL.M. year is proving to be “an absolutely unprecedented, wonderful experience,” he says. “I feel fortunate to take courses carefully tailored and perfectly fit for my specialty area. Data privacy is becoming more and more significant given the current developments, and studying it allows me to explore the possibilities of how technology and law can serve humanity better together.”

Akkasoglu’s history studies also made him realize the extent to which the United States is a country of recent immigrants. That made him feel he could rebuild his future here.

“I’m not the only person that has been forced out of their country and away from their family. I probably, unfortunately, won’t be the last one,” he says. “But I have to continue my life, and without giving up my passions. You can never know if you will be able to succeed other than by trying it.”

Hillary Maduka ’21 LL.M. was recognized by the global law firm as an accomplished advocate for disadvantaged populations.