The Free Speech Century: How the First Amendment Came to Life

A new book celebrates the 100th anniversary of the formative free-speech cases and warns of new threats to freedom of expression in the digital age.
The words drafted in 1789 seem plain enough: “Congress shall make no law…abridging the freedom of speech, or of the press.” Yet it was not until 1919, in response to the government’s harsh repression of World War I critics, including a candidate for President, that the U.S. Supreme Court began to give practical meaning to the First Amendment.

Progress was halting and the boundaries of legal expression remain contested, yet over the decades that followed the United States became “the most speech protective of any nation on Earth, now or throughout history,” writes Columbia University President Lee C. Bollinger ’71, the Seth Low Professor of the University and longtime member of the Law School faculty, in a new book, The Free Speech Century (Oxford University Press).

The book appears on the 100th anniversary of Schenck v. United States and two other criminal cases under the Espionage Act—seminal free speech cases in an era characterized by fear of immigrants, growth in white nationalism and a popular push for limits on political dissent.  Co-edited by Bollinger and a fellow First Amendment scholar, University of Chicago law professor Geoffrey R. Stone, the book’s themes resonate in our current moment. Bollinger, who continues to teach a popular law course for Columbia undergraduates each year, previously collaborated with Stone on Eternally Vigilant: Free Speech in the Modern Era (University of Chicago Press). 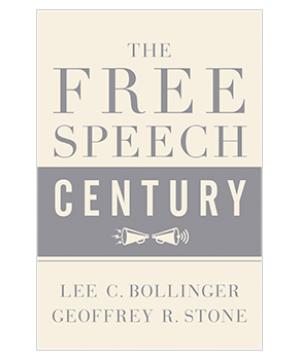 The Free Speech Century  features 16 essays by an array of pioneering legal scholars and respected practitioners, including Columbia Law professors Vincent Blasi, Sarah Cleveland, and Tim Wu. The eclectic mix of essays, along with an introductory and concluding dialogue between Bollinger and Stone, explore the development of First Amendment doctrine that flowed from the 1919 cases, its global influences, current disputes and especially new threats to free expression in the digital, social media age.

As Bollinger, who grew up in a family that worked at and published small-town daily newspapers in Santa Rosa, Calif. and Baker, Ore., concludes, the century-long saga of free speech in America is a grand one, “with a broad set of narratives and stories that are Shakespearean in their dramatic engagement.”

In a chapter entitled “Rights Skepticism and Majority Rule at the Birth of the Modern First Amendment,” Vincent Blasi, Corliss Lamont Professor of Civil Liberties, traces the emergence of speech protections in the early 20th century through the work of three legal giants: Learned Hand, Oliver Wendell Holmes, and Louis Brandeis. Troubled by governmental persecution of wartime dissidents, each would find a way, Blasi writes, to reconcile “a robust right of free speech” with majority rule.

Hand, in an influential district-court case in 1917 involving an anti-war magazine, held that since the words did not directly incite violent resistance, they should be permitted as what he called the “hostile criticism” that fosters sound public policy.

Holmes, even as he upheld a conviction in 1919 for anti-draft counseling, set forth an enduring limit on prosecutions: that the offending speech must present a “clear and present danger.” Later that year he wrote, in a dissent for the ages, that society is best served by the “free trade in ideas.”

Brandeis famously wrote in 1927 that liberty is “indispensable to the discovery and spread of political truth” and that, except in an emergency, the remedy for evil speech is “more speech, not enforced silence.”

Protection of unpopular speech is, of course, more universally accepted today.  But in some recent Supreme Court decisions, Blasi argues, including those striking down campaign finance regulations, conservative Justices have ruled for individual liberty while dismissing arguments about the impact on the functioning of democracy.  By positing personal freedom as an end in itself, Blasi writes, this approach “represents a departure from the teachings of Hand, Holmes, and Brandeis.”

In her chapter,  “Hate Speech at Home and Abroad,” Sarah Cleveland, the Louis Henkin Professor of Human and Constitutional Rights and a member of the United Nations Human Rights Committee, examines the development of hate-speech provisions in international law and how they have diverged from American legal doctrine, permitting more stringent controls on advocacy of racism or violence.

America’s global advocacy for speech protections has been remarkably influential overall, she writes, with free speech enshrined in human rights treaties, if not always honored in practice.  But in the aftermath of the Holocaust, global and regional treaties such as the Genocide Convention and the Universal Declaration of Human Rights allowed states to prohibit the advocacy of racial discrimination or violence. Modern American law, in contrast, crystallized in Brandenburg v. Ohio in 1969, distinguishes between mere advocacy of violence, which is protected, and incitement to imminent lawless action, which is not.

Still, Cleveland writes, American diplomatic advocacy has had a moderating influence on hate-speech provisions in international law, provisions that can bring outside scrutiny to bear on governments that misuse hate-speech laws to stifle legitimate dissent.  American protection of free speech “has fundamentally informed the shape of international human rights treaty protections, including in the context of hate speech,” Cleveland writes.  “It continues to exert a constraining influence on treaty interpretation and jurisprudence, and it continues to serve as a magnetic force in countering global political and social currents that would erode protections for freedom of expression.”

“Is the First Amendment Obsolete?” is the provocative question posed by Tim Wu, Isidor and Seville Sulzbacher Professor.  Wu does not question the continued need to protect dissidents and the press from state sanctions.  But with a free-wheeling internet and information overload, he says, what is scarce is not speech but listener attention, and expression is increasingly thwarted by indirect methods not addressed by First Amendment strictures.

These include, for example, deployment by governments or private groups of “troll armies” on social media to intimidate speakers, and the effort to drown out opposing viewpoints by flooding media with countervailing or false information, including multitudes of messages generated by propaganda “bots.”  The newfound ease of speaking out has, paradoxically, enabled “the use of speech as a form of speech control,” Wu writes – a development that “is very challenging for the First Amendment to deal with.”

If a President encourages online mobs to silence on a critic, for example, might this be a First Amendment violation under the doctrine of “accomplice liability?”

“To handle the political speech challenges of our time,” Wu writes, the First Amendment must be interpreted to permit “measures that protect some speakers from others.”

Bollinger notes in the book’s epilogue that “…our most memorable and consequential decisions under the First Amendment have emerged in times of national crises, when passions are at their peak and when human behavior is on full display at its worst and at its best, in times of war and when momentous social movements are on the rise. Freedom of speech and press taps into the most essential elements of life—how we think, speak, communicate, and live within the polity. It is no wonder that we are drawn again and again into its world.”