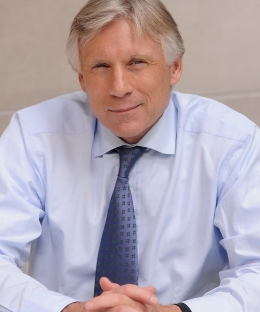 Lee C. Bollinger became Columbia University’s 19th president in 2002 and is the longest-serving Ivy League president. Under his leadership, Columbia is redefining what it means to be a great research university in the 21st century, distinguished by comprehensive academic excellence, an innovative and sustainable approach to global engagement, two of the largest capital campaigns in the history of higher education, and the institution’s most ambitious campus expansion in over a century.

President Bollinger is Columbia’s first Seth Low Professor of the university, a member of the Columbia Law School faculty, and one of the nation's foremost First Amendment scholars. Each fall semester, he teaches “Freedom of Speech and Press” to Columbia undergraduate students. His latest books are Social Media, Freedom of Speech, and the Future of our Democracy and National Security, Leaks and Freedom of the Press: The Pentagon Papers Fifty Years On, both co-edited with Geoffrey R. Stone.

As president of the University of Michigan, Bollinger led the school’s landmark civil rights litigation in Grutter v. Bollinger, a Supreme Court decision that for the first time upheld the constitutional right of colleges and universities to engage in affirmative action to advance diversity in higher education. His book with Professor Stone, A Legacy of Discrimination: The Essential Constitutionality of Affirmative Action, will be published in early 2023. Bollinger speaks and writes frequently about the value of racial, cultural, and socioeconomic diversity to American society through opinion columns, media interviews, and public appearances around the country. Columbia remains one of the most diverse universities among its peer institutions and has seen the number of applicants to Columbia College and the selectivity of admissions at the school reach record levels.

As Columbia’s president, Bollinger conceived and led the University’s most ambitious expansion in over a century with the creation of the Manhattanville campus in West Harlem, the first campus plan in the nation to receive the U.S. Green Building Council’s highest certification for sustainable development. An historic community benefits agreement emerging from the city and state review process for the new campus provides Columbia’s local neighborhoods with decades of investment in the community’s health, education, and economic growth. The first two buildings, the Jerome L. Greene Science Center and the Lenfest Center for the Arts, opened in spring 2017. The third, The Forum, which hosts conferences, meetings, and symposia, opened in September 2018. In 2022, Columbia Business School opened its new home, Henry R. Kravis Hall and David Geffen Hall, completing the first phase of campus construction.

Bollinger’s commitment to excellence in architecture is evident across Columbia’s campuses, from Renzo Piano’s master plan for Manhattanville, to the recently opened Roy and Diana Vagelos Education Center at Columbia University Irving Medical Center, designed by Diller Scofidio + Renfro, to Rafael Moneo’s design for the Northwest Corner Building on the historic Morningside campus, to the Campbell Sports Center at Baker Field designed by Steven Holl.

Among Bollinger’s signal achievements at Columbia are the development of a network of nine Columbia Global Centers on four continents and the creation of new venues on the university’s home campus supporting global conversations and scholarship, including the World Leaders Forum and the Committee on Global Thought.

From November 1996 to 2002, Bollinger was president of the University of Michigan, where he also served as a law professor and dean of the law school.

He is widely published on legal and constitutional issues involving free speech and press. His books include Regardless of Frontiers: Global Freedom of Expression in a Troubled World; The Free Press Century; Uninhibited, Robust, and Wide-Open: A Free Press for a New Century; Eternally Vigilant: Free Speech in the Modern Era; Images of a Free Press; and The Tolerant Society: Freedom of Speech and Extremist Speech in America.

Bollinger has received the National Humanitarian Award from the National Conference for Community and Justice and the National Equal Justice Award from the NAACP Legal Defense and Educational Fund for his leadership on affirmative action. He also received the Clark Kerr Award, the highest award conferred by the faculty of the University of California, Berkeley, for his service to higher education, especially on matters of freedom of speech and diversity. He is the recipient of multiple honorary degrees from universities in this country and abroad.

Bollinger is a former director of Graham Holdings Company (formerly The Washington Post Company) and serves as a member of the Pulitzer Prize Board. He is a member of the Council on Foreign Relations, the American Academy of Arts and Sciences (elected in 1992), and the American Philosophical Society (elected in 2004). From 2007 to 2012, he was director of the Federal Reserve Bank of New York, where he also served as chair from 2010 to 2012.

Bollinger was born in Santa Rosa, California, and was raised there and in Baker, Oregon. He is married to artist Jean Magnano Bollinger, and they have two children and five grandchildren. 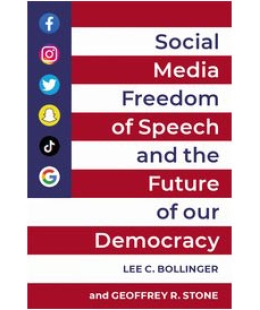 Social Media, Freedom of Speech, and the Future of our Democracy

“One of the most fiercely debated issues of the current era is what to do about ‘bad’ speech on the internet, particularly on social media platforms such as Facebook and Twitter. . . . In Social Media, Free Speech, and the Future of Democracy, two of the nation's most distinguished First Amendment scholars, Columbia University President Lee C. Bollinger and University of Chicago Law Professor Geoffrey R. Stone, have brought together experts from a variety of disciplines to explore the complexities of this problem. Their essays ask probing and thoughtful questions about the future of free speech as we look ahead to the future.” —Columbia News