The Jerome L. Greene Clinical Professor of Law and the students in her Immigrants’ Rights Clinic represent individuals and families seeking asylum and advocate for migrants across the country. 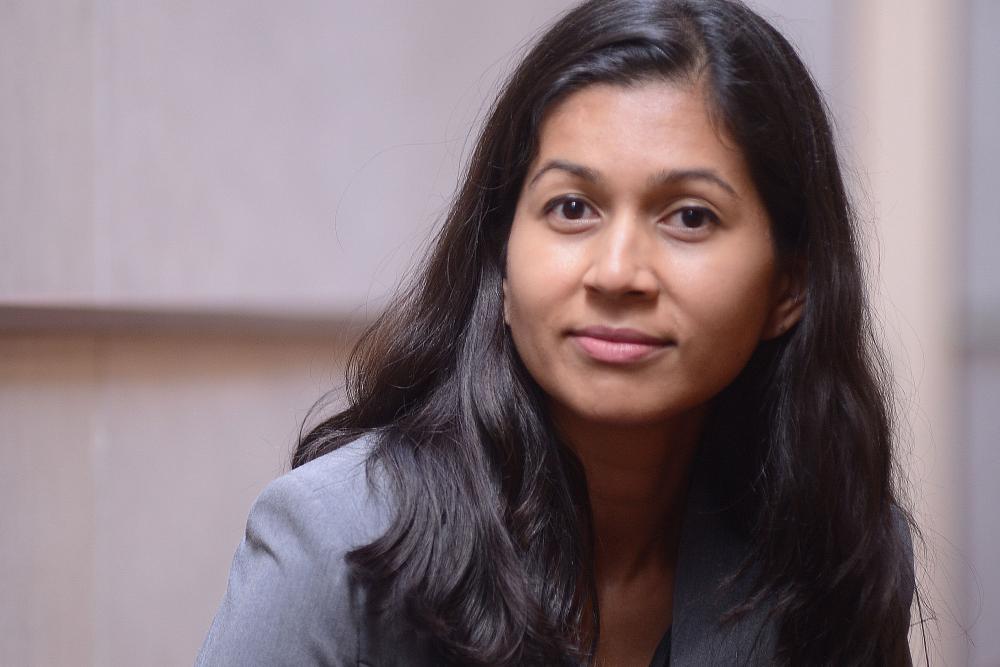 Elora Mukherjee has no patience for procrastinators. Despite her gentle demeanor and easy laugh, she’s a taskmaster with students. “I have no tolerance for missed deadlines,” says the Jerome L. Greene Clinical Professor of Law and director of Columbia Law School’s Immigrants’ Rights Clinic. In a single semester, she expects each of her students to oversee every detail of an asylum or deportation case, from the initial client interview to its adjudication or trial. “Our clients’ lives are on the line, and I can’t let the quality of our work suffer because a student isn’t pulling her or his weight.”

Since she founded the clinic in 2014, Mukherjee and her students have successfully represented hundreds of migrants and refugees who have fled violence and persecution in their home countries. “I try to identify vulnerable immigrants who will almost certainly lose their cases without high-quality counsel, and I choose projects where our clinic can add meaningful value to advancing immigrants’ rights,” she says. “I select challenging cases and projects that offer students rich learning opportunities.”

Mukherjee’s groundbreaking work led to her being named the Jerome L. Greene Clinical Professor of Law, a new endowed chair made possible as part of a $15 million gift in 2017 from the Jerome L. Greene Foundation, a longtime supporter of the Law School. “The Jerome L. Greene Foundation has been a champion of the Law School's clinical work from day one and it is an absolute honor to hold the inaugural Greene chair,” says Mukherjee. “This semester, the clinic is representing individual asylum seekers in New York and New Jersey, we’re working to support the sanctuary movement here in the city, we will assist detained refugee children and mothers near the Texas border, and we’re supporting refugees in Tijuana.”

Mukherjee demonstrates an unflagging commitment to immigrants’ rights and to her students’ hands-on education. On New Year’s Day, for example, she and five clinic members flew to Tijuana, Mexico, where they partnered with Al Otro Lado, a binational organization that provides direct legal services to refugees. Stationed in Tijuana for five days, the clinic team began their days at El Chaparral, one of the busiest land border crossings in the world. They worked 16-hour days, leading group orientations for about 80 refugees, individually counseling approximately 40 refugees about their asylum claims, and training 23 new volunteers in how to prepare refugees for their credible-fear interviews.

“This was my first time working with refugees on the southern side of the U.S. border,” says Mukherjee, which, she explains, is more dangerous than the northern side. “I had not previously been involved in such intense efforts to ensure clients’ safety from imminent harm and death.”

She has been taking students to the border since the clinic’s inception. They were on the scene just weeks after the Obama administration opened a massive immigration detention center primarily for children and their mothers in remote Dilley, Texas, in late 2014. When they arrived in Dilley in January 2015, they were the first pro bono counsel on site representing individual asylum seekers. And what the government had euphemistically named the “South Texas Family Residential Center,” she describes as a “deportation mill.”

“We were appalled by what we saw,” says Mukherjee. Over five days, her group secured the release of 15 families after highly contested hearings held via videoconference with the faraway Denver Immigration Court. “Within two weeks of returning to New York, we prepared a white paper about what we witnessed, and circulated it to hundreds of immigrants’ rights advocates across the country saying we must do something,” she says.

Her call to action and collaborative efforts with immigrants’ rights advocates nationwide helped to inspire the creation of the Dilley Pro Bono Project and introduced Mukherjee as a national voice for asylum seekers and detainees. To support this work, Equal Justice America, which provides opportunities for law students to work with organizations that deliver civil legal services, recently announced the creation of a two-year, $130,000 fellowship for a recent Columbia Law School graduate to work on the Dilley Pro Bono Project with Texas RioGrande Legal Aid.

The Personal Is Political

Mukherjee’s own experience growing up in suburban New Jersey as the daughter of Indian immigrants informs her career. “Our family was targeted with hate crimes—detonating devices that blew up our mailbox—and my father’s windshield was shot at and shattered,” she recalls. “There were hate crimes targeting South Asians in the 1980s, and my parents worked very hard to protect me and my sister from knowing about it.”

After graduating from Rutgers University in 2002, Mukherjee enrolled at Yale Law School, where she participated in its Immigration Legal Services clinic for five semesters. During her 2L summer, she interned for Lee Gelernt ’88, the deputy director of the ACLU Immigrants’ Rights Project. She clerked for a federal court for a year, then won a postgraduate fellowship with the ACLU Racial Justice Program. She worked at a civil rights law firm from 2007 to 2010, and then rejoined the ACLU Racial Justice Program as a staff attorney until 2013.

Her pivot to academia was a logical move. “My clinical professors helped to transform my life, and I thought if I ever got lucky enough, I would become a clinical professor,” she says. “It’s an amazing job: You get to teach, which I’ve always loved; you still get to be an advocate, and that is pretty much ingrained in me.”

In 2013, Mukherjee was hired as a teaching fellow by Brett Dignam, the director of Columbia Law School’s Challenging the Consequences of Mass Incarceration Clinic, and the Law School’s vice dean for experiential education. The two had met when Mukherjee’s husband, Columbia Law School Professor Jamal Greene, introduced them; he had been a student in one of Dignam’s clinics at Yale Law School. “Brett’s been critical to my professional development, and she is both a professional and personal role model,” says Mukherjee.

Dignam, in turn, describes Mukherjee as a force for good in the world. “She is a fierce and wildly successful lawyer who zealously advocates for her clients,” she says. “Elora devotes her unparalleled energy to representing people, often families and young children, who are in desperate need of her talent and commitment. She models excellence and compassion for our students on a daily basis.”

Mukherjee has built the Immigrants’ Rights Clinic into a pro bono powerhouse, and one that offers a rigorous educational experience. “Representing detainees and asylum seekers is an intensive, immersive process that requires dozens of interviews with each client, their family members, other witnesses in their home country, as well as collecting documents—court, police, and medical records,” says Mukherjee. “Students also have to write a brief for the case, and present opening and closing statements. If it’s a trial, they take direct testimony from our clients and supporting witnesses, including medical, mental health, and country conditions experts, and defend cross-examination by the Department of Homeland Security. It’s a lot of responsibility.” In July 2018, the Law School hired a staff attorney, Amelia Wilson, to co-teach with Mukherjee, which enables the clinic to accommodate more students. The pair also oversee an Advanced Immigrants’ Rights Clinic and supervise 10 former clinic participants who continue to do pro bono immigration work.

Mukherjee says these cases are emotional rollercoasters not only for the clients but for their legal counsel as well. “I check in every week with students on an individualized basis, and the first thing I want to know is how they are feeling,” she says. “We talk about burnout and secondary trauma. I want to make sure they are taking care of themselves.”

How does she maintain her own equilibrium while working in a field that is in perennial crisis mode? “I have a very supportive partner, and we have three amazing kids,” she says with palpable joy. “Most days, I spend the evening hours with my kids, and I try not to look at my phone or email unless it’s an emergency situation. That time is really rejuvenating for me.”

Still, the past two years have been unsettling. “I could just freak about it and stay glued to my screens, or I could do something that lets me physically burn off the stress,” says Mukherjee. She picked the second option and took up running. It’s an unlikely hobby for someone whose asthma got her excused from gym class in high school. But Mukherjee is fearless and determined in everything she does, and she completed the TCS New York City Marathon in November 2018 with a time of 4:48.23. “That’s one of the ways the Trump administration has changed my life,” she says.

UPDATE: On February 24, Elora Mukherjee and the clinic team that participated in the Tijuana trip discussed their work with students during a lunchtime event. A video of the presentation is available.