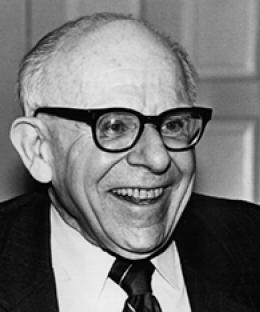 Frank P. Grad ’49 LL.B., a pioneering public and environmental law scholar who was called upon by New York City mayors and members of Congress for his expertise in legislation on issues ranging from air pollution to the Human Genome Project, died Oct. 14, 2014. He was 90.

Grad, an alumnus who most recently served as the Joseph P. Chamberlain Professor Emeritus of Legislation, was a dedicated New Yorker, a prolific scholar and practitioner, and a beloved professor. Teaching a variety of courses, he served as a mentor for legions of Columbia Law School students, including many who went on to become leaders in the profession. In addition, he was a sought-after expert for the media on matters relating to local law and environmental legal issues.

“Frank was a consummate colleague, modest, and always supportive to new members of the faculty and his students,” said Peter L. Strauss, the Betts Professor Emeritus of Law.

Born in Austria in 1924, Grad immigrated to the United States in 1939 to escape Nazism. He and his sister left Austria on the Kindertransport, and Grad lived with a family in England before coming to the U.S. The papers that recorded his arrival in this country list him as “stateless,” but Grad wasted no time in making New York City his home. Although as a child he witnessed the horrors of anti-Semitism under Hitler, he rarely spoke of this experience, wanting instead to look forward to the promise of a bright future in America.

Grad attended Brooklyn’s Eastern District High School and Brooklyn College before enrolling at Columbia Law School. He graduated in 1949 and was called back in 1953 after just a few years in private practice to serve as associate director of the LDRF under John M. Kernochan ’48.

“I was expected to be a rainmaker,” said Kernochan, who later went on to help establish intellectual property protections for artists, at a 1996 dinner celebrating Grad’s retirement. “Plainly, I was going to need someone very capable to draft bills while I made rain. Who else but Frank?”

Columbia Law School had been the first law school to teach a formal course in legislation in 1926 and, under Grad’s direction, the LDRF made some of its most significant contributions to public law. In 1959, Grad was given the task of revising the New York City Health Code, including provisions relating to water pollution and its prevention, control of sewage fallouts, and the control of toxic substances and poisons. The code also included numerous provisions relating to the protection of food and water supplies against contamination by pollutants.

“He shepherded the Legislative Drafting Research Fund through the most important years of its contribution to the city and state,” Strauss said.

In 1969, Grad became director of the LDRF and a full-time faculty member. He chose to take on classes in an emerging area in which his expertise would prove invaluable: environmental law. Grad was the first to teach the subject at Columbia Law School and, when he couldn’t find any materials to teach with, he wrote one of the earliest books on the subject.

“Frank Grad was one of the true pioneers in the study and teaching of environmental law,” said Michael B. Gerrard, the Andrew Sabin Professor of Professional Practice and director of the Law School’s Sabin Center for Climate Change Law. “The field's seminal year was 1970 (when President Nixon created the EPA and signed the first major laws of the modern era), and Frank was out of the box with one of the first casebooks in 1971, and then one of the first treatises in 1973.  He trained generations of environmental lawyers.”

According to a December 20, 1969, article in The New York Times, “Environmental Law is Attracting Students,” 69 students applied to be in Grad’s 18-seat first course. “The school, in an unusual relaxation of its rules, will permit 30 students to take the course,” the Times wrote.

In the late 1960s, then-Columbia University President Michael I. Sovern ’55, the Law School’s Chancellor Kent Professor of Law, called upon Grad to help lead the University through a time of student unrest.

“Professor Grad was one of Columbia’s great citizens,” Sovern said. “He successfully led the research and drafting team that recommended the then-new University Senate that opened the University’s governance to greater student and faculty participation.”

More than one New York City mayor relied on Grad’s expertise to help solve problems. Grad served as a close adviser to Mayor John Lindsay and is credited with establishing the Housing Court in the city. Later, when Mayor Ed Koch asked Sovern for help revising New York City’s Charter, Sovern tapped Grad to take the reins of the project.

Grad’s work spanned decades and major developments in science and the law. In 1980, he became the reporter for a federal project established by Congress to make recommendations relating to personal injuries resulting from the dissemination of hazardous waste subject to regulation under the Superfund law. In one of his final projects for LDRF, he spearheaded a study of the ethical, legal, and social implications of the Human Genome Project.

“Professor Grad was a leader in environmental law long before there was a field called environmental law,” said Edward Lloyd, the Evan M. Frankel Clinical Professor in Environmental Law. “He was an inspiration and mentor to generations of students and faculty who now grapple with the complex area of law that he pioneered. He will be sorely missed.”

When Grad retired from the full-time faculty in 1995, his fellow professors passed a resolution in his honor to record their “deep affection and high regard” for their colleague. Professor Emeritus Arthur W. Murphy ’48 LL.B. read a poem written about Grad earlier in his career by Professor Harry W. Jones ’39:

How gallantly hath Frank P. Grad
I pause now for your cheers
Wrought marvels at the Drafting Fund
These Five and Twenty years.

Moses on Sinai found the law.
Marshall at most applied it.
Greater by far is Frank P. Grad
For he hath codified it.

Justinian left a single code.
Napoleon?  What was he?
Frank P. Grad has drafted a dozen codes
Since 1953.

Richard Briffault, who assumed the Joseph P. Chamberlain Professor of Legislation title and directorship of the LDRF when Grad retired, said his predecessor was a “truly lovely man.”

“Frank Grad educated generations of Columbia Law students in the mysteries and distinctive skills required for legislative research and drafting,” Briffault said. “Over more than four decades, Frank demonstrated how much his mastery of legislation could accomplish outside the classroom.”