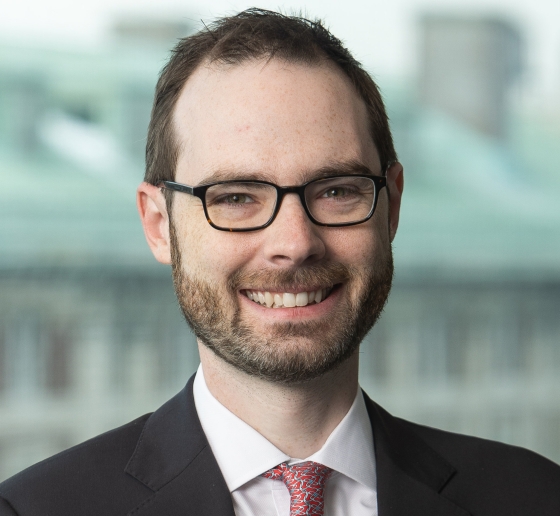 Lev Menand calls his academic focus on banking and monetary policy “a product of my biography.” Translation: He graduated from college in the midst of the 2008 financial crisis.

“It changed the world around me exactly at the time when I was entering the world as a full-fledged adult,” he says. Friends saw their job offers evaporate; Menand realized that our financial and economic system was badly broken.

Until the crisis began—markets plunging, foreclosures soaring, banks failing—“nobody in positions of authority thought anything was wrong,” Menand says. “There was a huge amount of confidence in the way things were set up. Everyone—and by everyone, I mean not just undergraduates like me, I mean most of the faculty and, you know, the grownups in society—seemed very confident. They were very surprised by what happened. And so it was also a shock to me, and I’ve spent the better part of the last decade and a half trying to figure out what went wrong and how we can stop it from happening again.”

Menand, who joined the Columbia Law School faculty on January 1 after a two-year stint as an academic fellow, studies money and banking, central banking, administrative law, separation of powers, economic regulation, and the history of economic thought. He is a champion of reforming the monetary system, including banks, Wall Street, and the Federal Reserve. In a 2018 paper, he proposed that the Fed give the public—individuals, businesses, and institutions—the option to open accounts at the central bank, accounts now available only to banks and government entities. These no-fee “FedAccounts”—a type of digital dollar or “central bank digital currency”—would pay the same level of interest that the Fed pays to banks.

FedAccounts would offer a banking option to many of the 7.1 million U.S. households that don’t currently use banks, Menand says. They also would attract funds from the less-regulated “shadow banking” system, reducing the amount of commercial paper, cryptocurrency, and even Venmo that people use, making the entire financial system more stable, he argues. (In January, the Fed launched a review of the possibility of issuing a digital dollar.) Menand’s first book, The Fed Unbound: Central Banking in a Time of Crisis, will be published in May.

The FedAccounts idea is “an effort at structural reform that isn’t about restricting activity of existing financial institutions, but [rather] about expanding the activity of the public sector,” Menand says. “If there was a public option for bank account money . . . you would undercut a lot of private sector unregulated products that attempt to offer people things that the current banking system doesn’t offer.”

Any resemblance between Menand and Sen. Elizabeth Warren, who was a law professor when she proposed the creation of the federal Consumer Financial Protection Bureau (CFPB) in 2007, is not entirely an accident: Menand calls her efforts an inspiration. The CFPB was formed in 2010 as part of the Dodd-Frank financial reform legislation.

“Elizabeth Warren’s work with the CFPB is part of what inspired me to pursue an academic career,” Menand says. “What she showed was that a legal academic who is interested in solving real world problems can make a huge difference. And that you don’t have to be in the government to contribute to public policy solutions.”

Menand worked in government himself, as an economist at the Federal Reserve Bank of New York and as a senior adviser at the U.S. Department of the Treasury. But—again based on his view of the 2008 crises—he decided he could contribute more outside of government than in it.

A Scholarly Approach to Money and Banking

An academic career was always part of Menand’s plans after law school. After two clerkships, he joined Columbia Law’s Academic Fellows Program, which prepares legal scholars for careers in academia.

Now, as a full-time faculty member, Menand is eager to work with, among others, Kathryn Judge, Harvey J. Goldschmid Professor of Law, who also focuses on the monetary system, and Katharina Pistor, Edwin B. Parker Professor of Comparative Law, who studies money and finance. “Columbia is quite unusual in having multiple people on the faculty who study what I study,” Menand says, adding that Columbia Law has also fostered scholars who develop public policy ideas that can be implemented—for instance, Associate Professor of Law Lina Khan, chair of the Federal Trade Commission and a leader on new approaches to antitrust, and Tim Wu, Julius Silver Professor of Law, Science and Technology, who is now serving in the Biden administration as special assistant to the president for technology and competition policy.

“Columbia has the most exciting law faculty in the country,” Menand says. “In the last few years, it has hired a group of terrific scholars, and its faculty are at the cutting edge of thinking about how the legal system intersects with the economy.”

What Khan and Wu are doing for antitrust policy Menand would like to do for money and banking. Wu has argued that antitrust law must be enforced because it protects an economic structure that facilitates democracy; Menand says the same thing is true for banking law.

“The banking system was set up with the same democratic principles in mind, and those principles have been eroded,” he says. “That erosion has had a cost for democracy, and I want to highlight that cost.”

Menand, who is married to psychiatrist Dr. Emily Menand, is spending the spring semester on parental leave. When he returns to teaching next fall, his students will likely be delighted to learn that he doesn’t believe in cold calls and likes to meet with students outside the classroom.

He hopes students’ goals involve fixing the banking system, or at least understanding it. Monetary policy and banking have too many economists and not enough lawyers, he says.

“It’s really important to understand wealth and power in this country,” he says. “I’m very eager to help people do that. I’m also very interested in turning people on to enter this field, either as academics or as practitioners. We need more future lawyers, and especially young and energetic people, to solve the problem. There’s a labor shortage in fixing our basic structures of economic governance, and I want to address that shortage by training more people to start rebuilding.”

Read All Stories More In The Media
Faculty Video

Professor Christopher Morten explains why the Biden administration has the right and responsibility to share the Moderna formula with countries with shortages of COVID-19 vaccine doses.