The first out gay professor at Columbia Law School and the second African-American member of the faculty, Thomas has brought a pioneering spirit and a critical perspective to his work over nearly four decades as a teacher, scholar, activist, and artist. 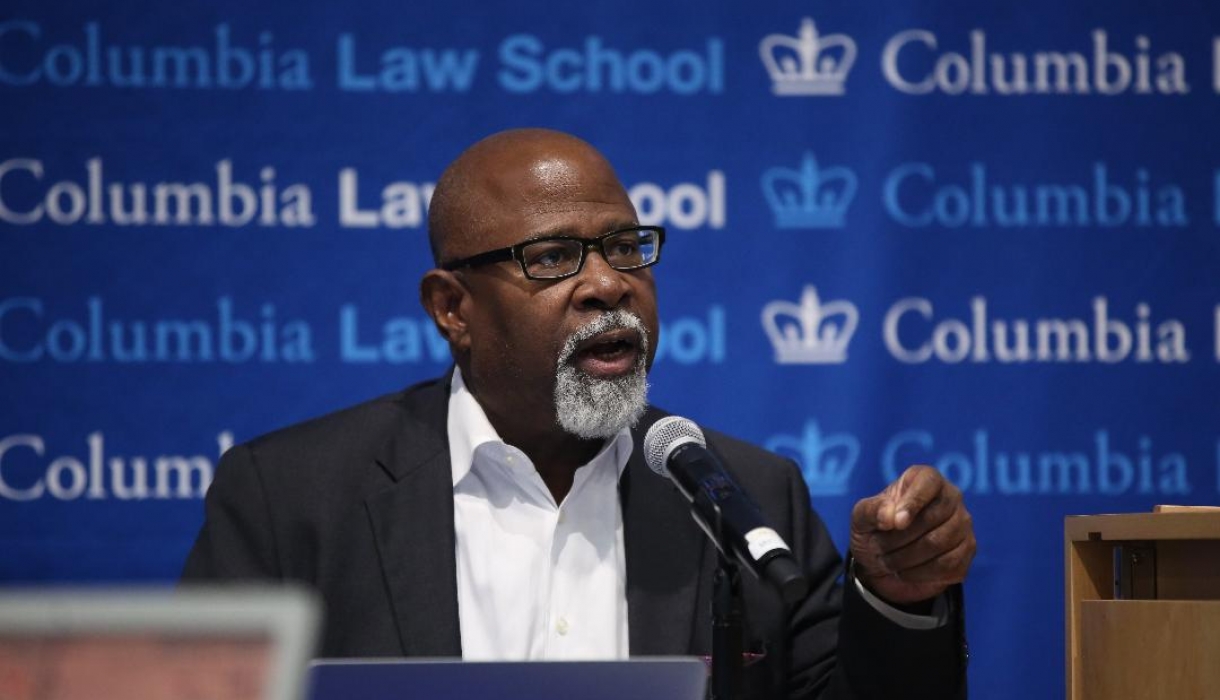 For Kendall Thomas, Nash Professor of Law and a co-founder of the Center for the Study of Law and Culture at Columbia Law School, the COVID-19 pandemic is a teachable moment.

“Intellectually, I have filtered the last four months through one of the central concepts of U.S. constitutional law that sits at the heart of the doctrine of federalism and its division of sovereignty between state and local governments,” says Thomas. “It’s the doctrine of police power, and the power of state and local governments to enact laws and policies and promulgate regulations that are aimed at protecting ‘the health, safety, welfare, and morals of people’ within a given jurisdiction—which embraces everything from criminal law to health laws.”

As a scholar of comparative constitutional law and human rights, Thomas saw “a clash between two different dimensions of police power” in May and June as demonstrations protesting police violence and systemic racism swept the nation while social-distancing regulations were in effect in many places. “From one perspective, the police power principle embodies a positive idea that speaks to the affirmative obligation government has to protect the public health, safety, security, and welfare. On the other hand, in many communities of color in this country, the police power is seen as a negative, repressive, and even violent presence. That’s because the face of police power for these Americans is the police who are their primary point of contact with government and the law. Hasn’t their history in this country taught them that the violent taking of Brown and Black lives is an essential part of the work that police do in their communities.”

A Call to Action

Thomas understands why so many people are willing to risk exposure to COVID-19 by participating in demonstrations (although, as a man in his 60s, he has chosen not to take that chance himself). “The decision to take to the streets is driven by anger, yes, but it also reflects a calculated balancing of risk that I am not prepared to dismiss as irrational,” he says. “Do they fear this invisible virus more than the visible, violent reality of life under a necropolitical regime that normalizes the state-sanctioned taking of Brown and Black lives?”

Thomas is encouraged by young activists who are building a civic consensus among people between 18 and 30 that “voting is a revolutionary act.” Voting, he says, “is the most immediate and important thing we need to do” in order to harness the momentum of the street protests so that it can lead to sustainable institutional and social change. “I was born in 1957, so I’m of a generation where I remember people talking about the right to vote and exercise of the franchise in precisely those terms—as a practice of freedom, as a revolutionary demand,” he says.

When the landmark Voting Rights Act was passed in 1965, Thomas was 8 years old. “Well, 1965 and 2020 are beginning to look a lot alike with the rise of illiberal anti-democratic counterrevolutionary politics that is seeking to turn the clock back. The law and the courts have been weaponized in a campaign to suppress, undermine, and, if possible, eliminate meaningful access to the voting booth for Black and Latinx Americans,” he says.

Activism as a Way of Life

Thomas grew up in a community of activists in Oroville, California, located at the base of the Sierra Nevada foothills. He sang in the choir of the church where his grandfather was the pastor. He remembers wearing a black armband after the 1963 assassination of civil rights leader Medgar Evers and marching with his grandfather’s congregation from the church to the courthouse for a vigil.

After earning his B.A. (in English literature and theater studies) and J.D. from Yale, Thomas arrived at Columbia in 1983 as an associate in law and joined the faculty the following year.

At the time, “Columbia was a very different place with many fewer women and people of color in the student body and on the faculty, and the school was much less international,” he says. “When I arrived at Columbia, the central and shaping reality of American legal culture for those of us in my generation who were gay or lesbian—whatever our race, ethnicity, or nationality—was the knowledge that we were entering the profession at a time when it was still a felony punishable with imprisonment in many places in the country to engage in consensual sexual intimacy with someone of the same sex,” he says. “So I entered law teaching quite conscious of the fact that I was breaking the law in a way by my very existence and participation in public gay sexual culture.” This history, he notes, is why LGBTQ+ students—at Columbia and at other law schools—called their affinity group OutLaws.

Thomas says being a gay Black man gave him a perspective that feminist scholars describe as an epistemological standpoint. He says his legal education taught him that the law is a tool for protecting people and providing a procedural and institutional framework for human flourishing. “My lived experience taught me that the law was a necessary but insufficient tool for challenging the hierarchical social and political structures that privilege being recognized as white and heterosexual in this country and so many others,” he says. “I have taken that experiential perspective with me to the study of law and to my professional practice as a legal critic.”

One of the great influences on Thomas’ life was Kellis Parker, who, in 1972, became the first Black professor at the Law School. “Kellis taught me that my work as a lawyer is a calling,” Thomas said at Parker’s memorial service, in 2001. “The dominant perspective sees the legal educator as a problem-solver, whose role is to justify the law; Kellis challenged me to see myself as a problem-poser, whose task is to criticize the law and law’s complicity in justifying illegitimate privilege and power.”

Thomas has applied that philosophy to his work throughout his career, including in his AIDS activism beginning in the 1980s. Thomas served on a Columbia University task force to advise on policies regarding HIV/AIDS and went on to be a founding member of the Majority Action Caucus of ACT UP, Sex Panic!, and the AIDS Prevention Action League. He also served as vice chair of Gay Men’s Health Crisis and recently completed a seven-year term on the board of the New York City AIDS Memorial.

Thomas has taught and written extensively about critical race theory, legal philosophy, feminist legal theory, and law and sexuality. He has collaborated with colleagues, including Kimberlé Crenshaw, Isidor and Seville Sulzbacher Professor of Law, who coined the term “intersectionality” in 1989. She and Thomas were authors and co-editors of the seminal 1995 book Critical Race Theory: The Key Writings That Formed the Movement.

One year ago, as the world celebrated LGBTQ Pride Month and the 50th anniversary of the Stonewall riots that launched the modern gay rights movement, Thomas took the stage at Joe’s Pub—a renowned music venue at the Public Theater in Greenwich Village—for his show "Summertime–A Solstice Songbook."

Thomas’s appearances at Joe’s Pub, where he’s performed since 2017, are both political and personal statements. In 2018, he performed a show about the music of Nat “King” Cole. “I talked about how much he had contributed to the cultural politics that prepared the ground for and was aligned with the Black freedom and civil rights movements of the 1950s and 1960s,” says Thomas.

He has also brought the arts into his work on the law. Some years ago, he wrote and presented an evening of music and theater at Columbia’s Miller Theater in which law students, staff, and faculty collaborated with professional actors in a performance piece on the culture of human rights. And he collaborated with choreographer William Forsythe and the Forsythe Company on “Human Writes,” a performance-installation that was staged in Belgium, Germany, Sweden, Turkey, and at the United Nations’ Palais des Nations, in Geneva, Switzerland.

Thomas says becoming a late-in-life performance artist has been empowering. “It’s made me feel whole and integrated. Living an integrated life is more important than it’s ever been because the challenges that lawyers face are as great as they’ve ever been,” he says. “At a time when the rule of law is under great stress, if we’re going to be up to the task of defending the idea of the rule of law, we have to lean into those parts of our shared lives that affirm our humanity. I am grateful to have found that affirmation in a powerful way through my return to the arts.”

| NPR
In The Media

Critical Race Theory Was the Hot Topic on Fox News This Summer. Not So Much Anymore.