The head of the International Rescue Committee and former politician receives the Wolfgang Friedmann Award for contributions to international law. 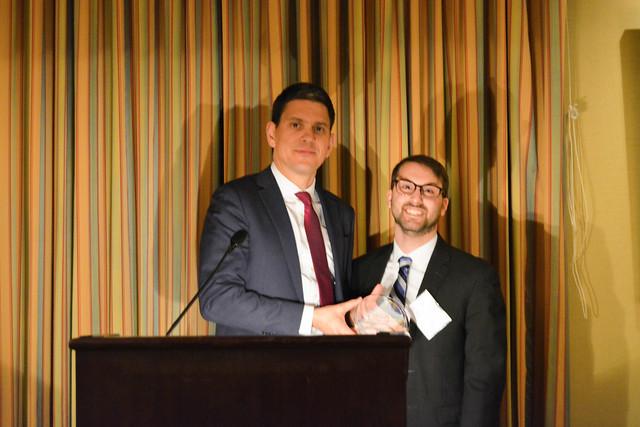 In countries such as El Salvador and Syria—among the 40 nations where the nonprofit refugee relief agency operates—“the rule of law is but a distant dream,” Miliband said, “replaced with the rule of an iron fist.” Worse, “the retreat from international law is no longer confined to failed states,” he said. “Liberal democracies are becoming more intolerant, illiberal democracies are electing authoritarian personalities, authoritarian regimes that once coexisted with pockets of opposition no longer see the need to bother. In other words, the retreat is at home as well as abroad.”

Miliband received the award named in honor of Wolfgang Friedmann, founder of the Journal of Transnational Law and a professor of international law at Columbia Law from 1955 until his death, in 1972. Friedmann had been a judge in Germany, and escaped the Nazi regime in the 1934. He came to the United States just a year after Albert Einstein, who had also fled the Nazis, founded the International Rescue Committee (IRC).

“We need to honor the legacy of people like Professor Friedmann by defending our world against those who would allow . . . an age of impunity disregarding the norms and rules of international humanitarian law so assiduously built up in the course of the 20th century,” Miliband said.

Refugees today differ significantly from those of Friedmann’s era, Miliband said: 90 percent are from low- or moderate-income countries, 60 percent are living in urban areas rather than refugee camps, and the average length of displacement has ballooned to 17 years.

Miliband cited Hungary’s laws banning aid to asylum seekers, Australia’s policy of indefinite incarceration of refugees—which has been condemned by a U.N. Human Rights Council working group—and what he described as “appalling conditions” at migrant detention centers run by U.S. Immigrations and Customs Enforcement. The IRC is working in 25 U.S. cities to resettle refugees and asylum seekers. “What is happening today on the U.S. southern border can only be described as not just a flouting of moral obligations, but a violation of domestic and international law on the rights of asylum,” Miliband said.

“Don’t even get me going on whether or not this country is ‘full,’” he added, referring to President Donald Trump’s recent assertion to that effect on Twitter.

Miliband called on Columbia Law students to “defend and restore the regime of human rights.”

“We need you to help us show why international law is not a straitjacket for national sovereignty,” he said, “but instead the scaffolding on which nations can build a more stable, more just, and more prosperous future.”

Read All Stories More In The Media
Events News