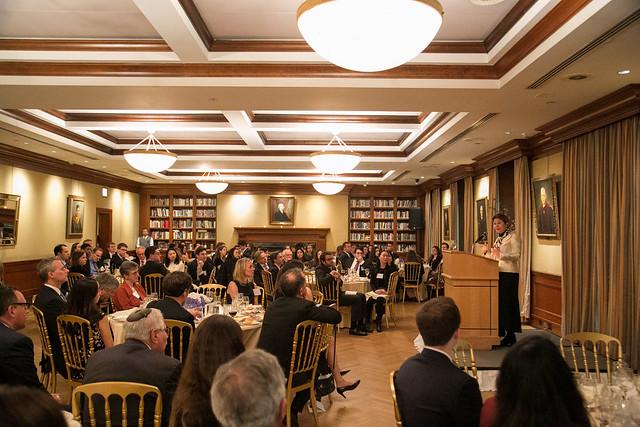 Anne-Marie Slaughter is an esteemed academic, public policy guru, and feminist icon with 159,000 Twitter followers. The president of New America, a think and action tank, Slaughter is also the former dean of Princeton’s Woodrow Wilson School of Public and International Affairs, the first woman to serve as director of policy and planning for the U.S. Department of State, and the author of scholarly treatises such as A New World Order (2004).

However, it was her 2012 Atlantic magazine cover story—“Why Women Still Can’t Have It All”—that secured Slaughter’s crossover reputation as a public intellectual, according to Columbia Law School Professor Anu Bradford. She introduced Slaughter when the student-run Columbia Journal of Transnational Law presented her with its Wolfgang Friedmann Memorial Award on April 3 at the Princeton Club in New York.

The editors of the student-run journal chose to honor Slaughter because she is a philosophical descendant of Friedmann, who escaped Nazi Germany, became a Columbia Law School professor, and helped establish the publication in 1961. “He was the inspiration, guardian, and creative force of the Journal,” said Lecturer in Law P. Nicholas Kourides, who chairs its board.

At the banquet, Kourides recounted that Friedmann was robbed and stabbed to death in 1972, which led to the establishment of the prize in 1975. “Since then, we have given the award to 44 of the most outstanding and remarkable contributors to the development of international law . . . a group of individuals who embodied those qualities espoused by Wolfgang Friedmann and who have devoted their lives to ‘creating a better world order,’” he said.

Bradford, the co-director of Columbia Law School’s European Legal Studies Center, said Slaughter’s Atlantic story was an act of courage. “Many women who want to be taken seriously in policy debates about the war in Syria or the nuclear deal in Iran do not want to be associated with debates on gender,” she said. “Her legacy serves as an example of the unyielding professional and personal commitment and resilience in service of sound foreign policy that is grounded on the principles of international law. In many ways, her career is a call for the next generation of international lawyers—all of you—to do work that is important and relevant, meaningful to you, and meaningful for the world.”

When Bradford was studying at Harvard for her LL.M. in 2001–2002, she became close to Slaughter, who was then the director of the university’s International Legal Studies Program. “I would not have the skills, the courage, or opportunity to teach this amazing group of students at Columbia had I not been mentored by you, Anne-Marie,” she said.

Several students were recognized at the banquet, including Journal Editor in Chief Kathryn Hutchins ’18; Timothy Cuffman ’19 and Andrew Brickfield ’19, who won the Journal’s Best Note and Outstanding Note awards, respectively; Thomas Enering ’18, Shyam Shanker ’18, and Jacqueline Stykes ’18, who each received the Neil McDonell Memorial Prize for Outstanding Service to the Journal as a senior editor.

In accepting the award, Slaughter—whose most recent book is The Chessboard and the Web: Strategies of Connection in a Dangerous World—described Friedmann and his fellow Columbia Law Professor Philip C. Jessup ’24  as visionaries “who absolutely saw that the world of the web is what transnational law is,” she said.

Slaughter noted that she recently reread portions of Friedmann’s seminal The Changing Structure of International Law. “He might have used a different vocabulary, but it is striking to me when I read his writings that I think I am just saying the same thing,” she said. Nevertheless, today’s transnational lawyers face many unprecedented issues. “What are the laws right now that regulate the various hackers who are distorting our democracy?” Slaughter said.

She pointed to the increasing power of sub-state actors—corporations, NGOs, terrorist groups, social media companies, local governments—in global affairs. “Look at what California is trying to do. California hasn’t seceded—it just has its own foreign policy,” she said to great laughter. “Oakland and San Francisco are suing six oil companies to pay for infrastructure and remediation that will be necessary because of rising sea levels due to climate change. You better believe the Supreme Court will have something to say about that.”

Slaughter stressed that issues of transnational law fundamentally are “our concern as people who want a better world order,” she said. “If we cannot have a global civil society, that is a real problem.”