The 20 Iraqi lawyers, engineers, and economists are in the U.S. for advanced training in arbitration of contract disputes. 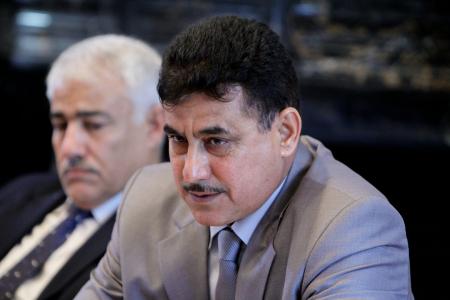 Doctor Sabah Al-Saidi, the head of the Iraqi delegation, speaks at the Petroleum Contracting and Licensing Directorate at Columbia Law School, Wednesday, February 17, 2010.
As Iraq continues to rebuild its oil industry—the lifeblood of its economy—it is also looking for the best ways to work with the international oil companies whose bids have been accepted by Iraq to develop its vast, untapped reserves.
About 20 Iraqi lawyers, engineers, and economists are in the U.S. for advanced training on implementing contracts with international oil companies, and came to Columbia Law School last week to study best practices for alternative dispute resolution, especially arbitration of contract disputes.
“International arbitration has become a subject of enormous practical importance in today’s world in terms of dispute resolution,” said George Bermann, the Jean Monnet Professor in EU Law and Walter Gellhorn Professor of Law.
Bermann, a leading expert on international trade contracts and transnational arbitration, was among the panelists who spoke to members of Iraq’s Petroleum Contracting and Licensing Directorate, the part of Iraq’s oil ministry that handles contracts and negotiations with dozens of international oil companies.
“Iraq, like a lot of countries, is seeking to attract foreign direct investment,” Bermann said. “One way is to offer some assurance to investors that there will be an opportunity for disputes, if they arise and can’t be settled, to be resolved in a neutral forum rather than a host country.”
The three-day training at the Law School was part of a program for the Iraqis sponsored by the U.S. Commerce Department that includes other aspects of contract negotiations.
“What we’re trying to do is offer them choices, offer them expertise and say this is what is happening in the international setting and here’s what you can learn from it and take the best practices from it,” said Steve Gardner, chief counsel for the Commerce Department’s Commercial Law and Development Program. 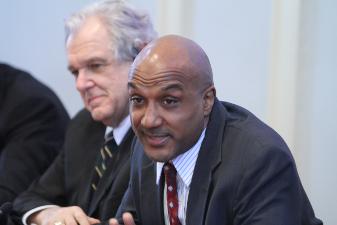 Brian Gibson, Assistant Dean for International and Comparative
Law, speaking, and Professor George Bermann, left.
Gardner said sessions like the one at the Law School are “demand-driven,” and it was the oil ministry that determined its officials would benefit from exposure to the best practices used in arbitration, which had not been a component of oil contracts under the regime of Saddam Hussein.
The training, said Dr. Sabah Al-Saidi, head of the Iraqi delegation, is also intended to show how to avoid disputes in addition to demonstrating how arbitration works when a conflict does arise.
“The participants from the ministry have been extremely receptive, extremely focused, and asked a lot of very pertinent questions,” Bermann said. “I would say it was a great success.”
Also taking part in the training was Pieter H.F. Bekker, a Lecturer-in-Law , who teaches a class on investment law and arbitration, and led a discussion on drafting arbitration clauses.
The Law School has long been recognized for its scholarship on international arbitration. Columbia University is home to the American Review of International Arbitration, a quarterly review of recent developments and case notes. It is the only publication of its kind in the U.S., and is co-edited by Hans Smit, the Stanley H. Fuld Professor of Law.
Bermann also serves as the Chief Reporter of the American Law Institute’s new Restatement of the U.S. Law of International Commercial Arbitration.