Columbia University has received two gifts from India to endow a chair devoted to Indian Constitutional Law and establish a fellowship named after Professor Jagdish Bhagwati, both at Columbia Law School.

Media Contact:
Public Affairs Office, 212-854-2650 [email protected]w.columbia.edu
New York, April 7, 2010— Columbia University has received two gifts from India to endow a chair devoted to Indian Constitutional Law and establish a fellowship named after Professor Jagdish Bhagwati, both at Columbia Law School.
The gifts were formally announced Apr. 1 by Meera Shankar, India’s ambassador to the U.S., during an appearance at the Law School to speak about democracy and pluralism in India.
"This initiative adds an important dimension to Columbia University's long and illustrious association with India," Shankar said.
David M. Schizer, Dean and Lucy G. Moses Professor of Law, noted it was essential that the Law School develop greater expertise about India.
“In the 21st Century, India will play an increasingly important role as the world's most populous democracy. India's economic influence is also growing rapidly,” Dean Schizer said. “From India, the world has much to learn about pluralistic democracy and about successful economic development in a democratic system.”
The first gift will establish the B.R. Ambedkar Professorship in Indian Constitutional Law. The second will endow the Jagdish Bhagwati Fellowship.
The chair is named after Bhimrao Ramji Ambedkar, a renowned Indian lawyer, politician and civil rights activist who was the architect of the Indian Constitution. Ambedkar received an M.A. from Columbia University in 1915, and a Ph.D. in 1927. He died in 1956.
“At Columbia we have both a deep intellectual history and a thriving contemporary engagement in India across many academic fields,” said Lee C. Bollinger, President, Columbia University; Professor of Law. “What is most important about the new Ambedkar Chair and Bhagwati Fellowship is that they are not simply powerful examples of this history but of a Columbia future that reflects a truly global perspective on law and society.  We are deeply grateful for the generous gifts that have made this commitment possible.”
The first Ambedkar professor is Akhil R. Amar, a visiting professor and constitutional scholar from Yale Law School (seen at right talking with Bollinger). 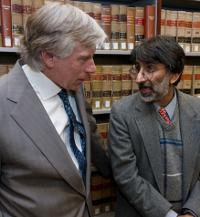 “It’s humbling because this chair is a connection between India and America and that connection has a lot of meaning to me personally,” Amar said. When I told my dad about all of this, tears came into his eyes. When he was born, India was a British colony. It achieved its independence under Gandhi and Ambedkar and that’s his life story.”
India will also underwrite the Jagdish Bhagwati Fellowship, which will fund a minimum of two Law School fellows per year. Preference shall be given to students who are residents of India and are interested in performing work and research in international trade, trade law, public interest law, and human rights.
Bhagwati, one of the world’s best-known economists, is University Professor at Columbia University and a Senior Fellow in International Economics at the Council on Foreign Relations.
Bhagwati is widely regarded as the intellectual father of Indian economic reforms that Prime Minister Manmohan Singh has led, which have transformed India into a rapidly growing force on the world stage. Columbia University has recognized his achievements by founding the Jagdish Bhagwati Chair in Indian Political Economy, now occupied by economist Arvind Panagariya.
The acceleration of India's growth rate has also had a substantial impact on poverty, which has been Bhagwati's principal concern since he began his career in 1961 in the Indian Planning Commission. His writings on democracy, secularism and religious freedom, have led to acclaim beyond the world of economics for Bhagwati and complement the achievements of Ambedkar regarding social justice in India. Among his many awards is the Padma Vibhushan, India's second-highest civilian honor. 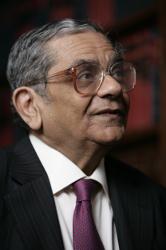 “I feel flattered,” Bhagwati (left) said of the fellowship. “There is something in being recognized, not just by economic peers, but also by your own country. I feel very happy about that.”
(Photos by Jon Roemer)
Columbia Law School, founded in 1858, stands at the forefront of legal education and of the law in a global society. Columbia Law School joins its traditional strengths in international and comparative law, constitutional law, administrative law, business law and human rights law with pioneering work in the areas of intellectual property, digital technology, sexuality and gender, criminal, national security, and environmental law.
Visit us at http://law.columbia.edu
Follow us on Twitter http://www.twitter.com/columbialaw