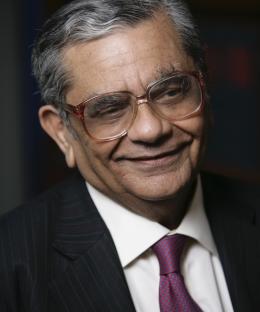 Internationally known economist Jagdish Bhagwati is among the most influential trade theorists of his generation. In his academic work, he has made pioneering contributions to the study of economic development, international trade, foreign aid, and immigration. Through his expert advising for major international organizations and his regular writing and interviews in media worldwide, he has been a persuasive proponent of free trade and economic globalization.

Bhagwati favors unrestricted trade between nations as a way to raise living standards around the world while also supporting human rights and preserving the environment. In his home country of India, Bhagwati is considered the father of the market reforms that transformed that country’s economy. He remains one of India’s key fiscal influencers, advocating that good jobs and higher wages can stimulate the country’s economy by helping people invest in their own education, health, and vitality.

Bhagwati is a senior fellow in International Economics at the Council on Foreign Relations, has served as an expert adviser to multinational organizations including the World Trade Organization, the General Agreement on Tariffs and Trade, the United Nations Conference on Trade and Development, and Human Rights Watch.

His 2013 book Why Growth Matters: How Economic Growth in India Reduced Poverty and the Lessons for Other Developing Countries (written with Columbia economist Arvind Panagariya) was named a Financial Times Book of the Year. Termites in the Trading System (2008) discusses the deleterious effects of preferential trading agreements. In Defense of Globalization (2004) attracted worldwide acclaim.

His 1963 paper, “Domestic Distortions, Tariffs, and the Theory of Optimum Subsidy,” written with the late V.K. Ramaswami and published in the Journal of Political Economy, remains a landmark in postwar theory of commercial policy; it clearly establishes rigorously specified conditions under which free trade is optimal in the presence of market failures. Bhagwati also has made significant contributions to the analysis of preferential trade agreements.

Bhagwati arrived at Columbia from MIT in 1980. In 2001, he was appointed a University Professor, Columbia’s highest faculty rank reserved for those faculty who have made important contributions to their field of study. At the Law School, the Jagdish Bhagwati Fellowship for LL.M. students specializing in international trade, trade law, public interest, and human rights, is underwritten in his honor by the government of India. A chair in Indian political economy is endowed in his name at the School of International and Public Affairs.

Among the many distinguished economists and academics Bhagwati has mentored is 2008 Nobelist Paul Krugman. He has also appeared in popular culture: In 2014, an episode of The Simpsons awarded the Nobel to Bhagwati himself.