The Campaign for Columbia Law Goes to the West Coast

Dean Gillian Lester, four faculty members, and the campaign’s co-chairs traveled to Los Angeles to kick off the Law School’s campaign on the West Coast.

Nearly 100 alumni and guests gathered at the Waldorf Astoria Beverly Hills on Oct. 22 for the West Coast launch of the Campaign for Columbia Law, an ambitious plan to raise $300 million over five years.

“Although we’re some 3,000 miles from Columbia Law School’s home in New York City, tonight still feels like a homecoming,” said Gillian Lester, Dean and Lucy G. Moses Professor of Law. Noting she spent 24 years living in California, she said that her nearly four years as dean have shown her the Law School community is strong “not just here on the West Coast or in Morningside Heights, but wherever one finds Columbians.”

The campaign, launched last year, has raised $145 million so far. The campaign’s co-chairs, Alison S. Ressler ’83, Brad Smith ’84, and Kathy Surace Smith ’84, who also co-hosted the Los Angeles event, each spoke about the importance of alumni support of the school. “Whether it is raising funds to meet our commitment to public service careers for students or to recruit and retain a faculty who are at the very top of their fields—like the professors who joined us this evening to share their scholarship—experts in big data, corporate governance, immigrants’ rights, and national security, it is about our vision to prepare students to make a deep impact on our world and provide the best legal education possible to position them to do so,” said Ressler.

Without scholarship support, California native John Sandoval ’17, a Harlan Fiske Stone Scholar who is now an associate at Gibson Dunn in Los Angeles, said he wouldn’t have been able to attend Columbia, an experience he considered life-changing. “Definitely, one of the most valuable results that came from my law school education were the lifelong connections that I made with friends, colleagues, professors, and the administration,” he said.

To learn more about the campaign, visit our site. 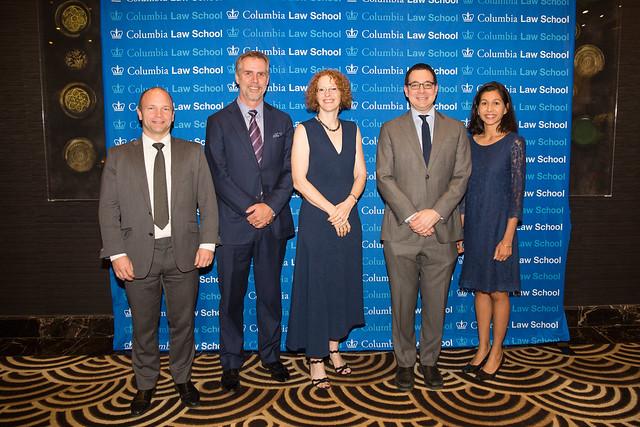