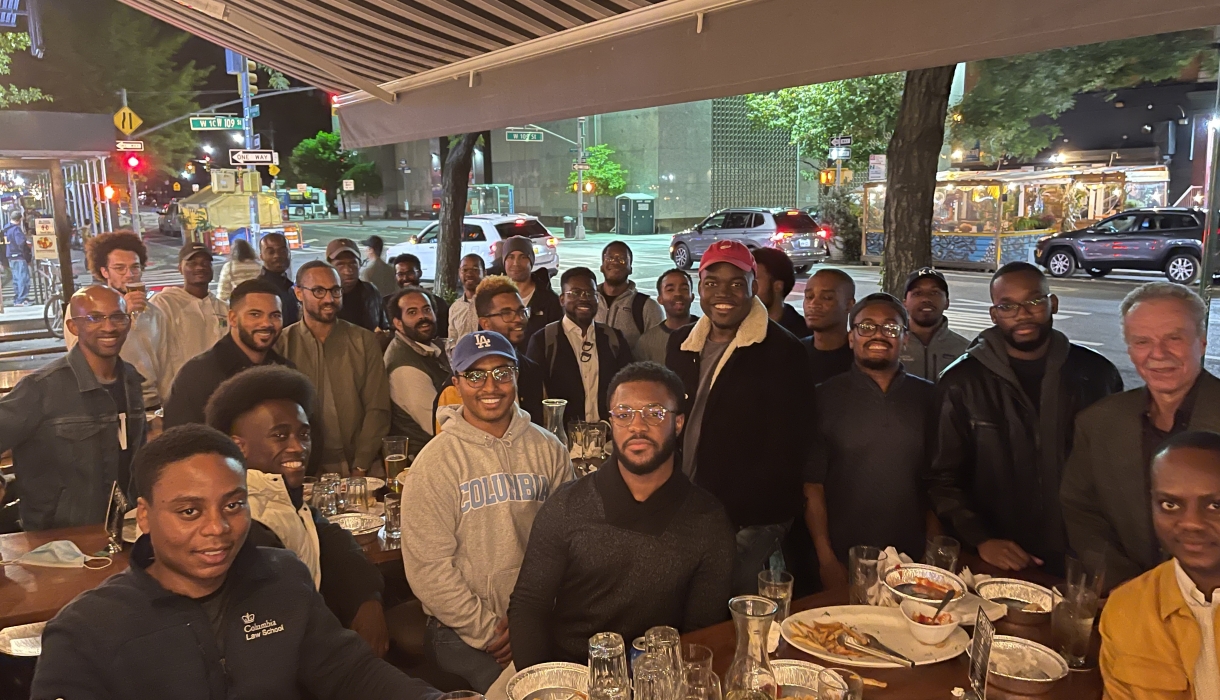 “I was a college dropout 4 years ago,” @RaggaJani tweeted in January. “I start LSAT training through Columbia Law School on Saturday and I graduate from NYU in May.”

The tweet, from a participant in Columbia’s Law School Pathways Program, showed Okoro that the pipeline initiative—started last year to help first-generation, low-income students from Harlem, Upper Manhattan, and the Bronx considering law school—is already achieving its goals. The program was launched by Okoro and fellow students Iris Carbonel ’22 and Stephanie Nnadi ’22.

“That was confirmation—that [Pathways] is actually having an impact—in a way that was so heartfelt,” Okoro says.

For Paul Riley Jr. ’22, an outdoor happy hour at Amity Hall (pictured above) encapsulated what he was trying to achieve when he and Damonta Morgan ’22, founded the Black Men’s Initiative ([email protected]), a group for Black male Columbia Law students and alumni. The October event drew 40 men, including alumni and faculty. The organizers had some trepidation about how a large public gathering of Black men would be received, Riley says. “We still do subconsciously think about those things because these [welcoming Black] spaces don’t exist as frequently as we think they should.” But all went smoothly. “It was just powerful to have people there and just talking and laughing,” he says

Both the Law School Pathways Program and the Black Men’s Initiative are among the first projects funded through the Law School’s Anti-Racism Grantmaking Program. The grants were launched in March 2021 to support projects intended to dismantle racially subordinating policies, structures, or systems, or otherwise help promote racial equity and inclusion.

A year later, the project organizers are celebrating successes while working to ensure the programs continue after they graduate.

Navigating the Path to Law School

Both programs seek to fill a need that the founders felt themselves: The women who launched Pathways are first-generation professionals, and they say the guidance the program provides would have been helpful to them, too.

In the Pathways’ Saturday Academies, the 16 fellows in this year’s cohort, selected from more than 70 applicants, have met with judges, prosecutors, and law professors. They have learned about financing law school, managing student loans, and prepping for the LSAT.

“There is such a lack of information for potential law students who are outside traditional routes to law school,” Okoro says. “That’s something that definitely animated us as first-generation students. . . . We wanted to combat that.”

The Pathways Program, which is modeled on similar programs at other law schools, focuses on students from Columbia’s surrounding neighborhoods: Harlem, upper Manhattan, and the Bronx. “There are quite a few law schools that have [neighborhood-focused] pipeline programs, and we thought, ‘Why not Columbia?’” Okoro says. “Why don’t we give back to the communities that we take so much from?”

The three founders worked with Kendall Thomas, Nash Professor of Law, to build the program’s curriculum and were joined by Harlem residents Jay Holder, director of the National Executive Council at the university’s Center For Justice; and Pastor Isaac Scott, a fellow and project director at the Center for Institutional and Social Change.

The program founders said they learned from the pipeline participants as well as the other way around. “This year’s fellows jumped in immediately with their insights and their different experiences. That made the entire group discussion much more meaningful,” Nnadi says. “Something I learned from them, honestly, is the importance of being open and creating a space where you feel comfortable to show up as your full and authentic self. That’s something we might not experience in our own classrooms as law students of color.”

The program founders also wanted to make sure that the Pathways Program is available to and meets the needs of formerly incarcerated students.

“We want to change the perception of what a diverse candidate for law school looks like,” Nnadi says. “It’s not just what you facially look like, it’s the experiences you’ve had. Justice-impacted individuals tend to get left behind because they may not have the elite accolades that these [law] schools value.”

Students who have been incarcerated may be underestimated by others, Carbonel adds; they need to know that law school and joining the bar are possible for them. “I’ve been very impressed by the work these fellows have achieved in their LSAT preparation. And I’m excited to see where they go following the program.”

Morgan and Riley, the Black Men’s Initiative founders, wanted closer connections with classmates. While nearly one-third of Columbia Law J.D. candidates identify as students of color (among those who are U.S. citizens), just over 5% identify as Black men, according to the Law School’s ABA filing. Despite that relatively small cohort, Morgan says of his first two years, “I would walk through these halls and I would see Black men I hadn’t met. There are so few of us you would assume we would all know each other. . . . We wanted to provide a space for that to happen and then to do that with our alums.”

“The initial premise was that it would just be a huge shame to go three years and to not know or to have engaged in a community,” Riley says.

To counter that, the group has held online panel discussions on topics such as financial planning, Black men in politics, and transitioning between private and public sector careers as well as networking and social events. In addition, the initiative hosted an online screening and discussion of Black Boys, a documentary about childhood, which Morgan called “very affirming and deeply emotional.”

The group, also advised by Thomas, serves as a place to discuss the particular experiences of being Black and male in the Ivy League, “so we don’t feel like we’re going crazy when we’re having these nuanced experiences. . . . Even as we operate in these spaces of privilege, we’re still dealing with microaggressions and things of that sort,” Riley says.

Both founders have been active in the Black Law Students Association (BLSA) and say [email protected] is a complement, not a competitor, to BLSA. They felt it was important to have a group just for Black men to discuss life experiences and complex issues like relationships, money, or how Black men are perceived in job interviews. “Not that Black women don’t also have these pressures,” Riley says, “but [discussing] expectations and perceptions of how Black men should operate in spaces—the nuanced affirmation of that is what’s amazing” about [email protected].

“We agonized over this a lot,” Morgan says. “And we were very clear, when we sent out the email [announcing [email protected]] to the guys on campus, that this is not a space to preserve the patriarchy.”

[email protected] has since expanded its membership—events include alumni participants and speakers, including former Federal Trade Commission member Mozelle W. Thompson ’81—and the organizers have found prospective law students are interested in the organization. The group has built a roster of 150 participants and is working to create small groups of members to serve as mentors for one another.

The enthusiasm of alumni for the program has been emotionally rewarding as well as helpful, Riley says. “It’s just been so powerful over the last few events to hear about alums who were like, ‘I haven’t engaged in 20 years. And [email protected] is giving me a reason to reframe that and to give back.’”

Planning for the Future

Both programs are navigating the change from online-only events, necessitated by the pandemic, to in-person programming. But the student founders say their bigger challenge is to ensure that the programs they started outlast the initial Anti-Racism Program Grant—and their own tenure at Columbia Law. The Pathways Program, for instance, might find a home at one of the Law School’s centers.

[email protected] is not registered as an official student group, but its leaders are discussing with the Law School a future that could include the group’s becoming one. They are also looking to 2L and 1L students, as well as alumni, to sustain the project and believe strong engagement with Black alumni has validated the group’s purpose. [email protected] student leaders for next year include Brenton Browne ’23 and Jermel McClure ’24.

“The stakes for us just feel so high,” Riley says. “If this falls apart, the people we’ve engaged, we don’t want them to lose hope. It feels like this is our last inflection point to keep this sustaining before people who we’ve lost will never re-engage.”

At the Amity Hall happy hour, however, Riley realized that for 1Ls who attended, the Black Men’s Initiative will likely be a consistent part of their law school careers. “It’s already shifting their experience where they realize ‘This is not novel. This seems to be the expectation.’ And that’s what’s really powerful.”

The new grantmaking and fellowship programs are part of the Law School’s ongoing commitment to anti-racism in the Columbia community and beyond.

Updates from the Anti-Racism Steering Committee