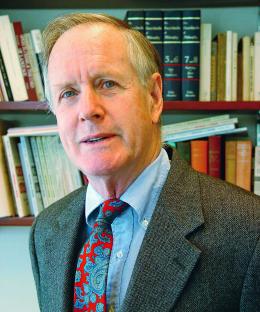 A renowned authority on constitutional law and legal philosophy, Kent Greenwalt ’63 LL.B. has devoted his more than 50 years at Columbia to teaching and writing about legal interpretation, discrimination, church and state, freedom of speech, and criminal responsibility. His seminal books include Religious Convictions and Political Choice (1988) and Speech, Crime, and the Uses of Language (1989).

As a student at Columbia Law School, Greenawalt was a Kent Scholar and editor in chief of the Columbia Law Review. After graduation, he clerked for U.S. Supreme Court Justice John M. Harlan and was an attorney for the Lawyers’ Committee for Civil Rights in Jackson, Mississippi. He joined the Law School faculty in 1965. During the early years of his academic career, Greenawalt served on the New York City Bar Association’s civil rights committee from 1966 to 1969 and as deputy solicitor general in the U.S. Department of Justice from 1971 to 1972. He was elected to the American Academy of Arts and Sciences in 1980.

In 1991, Greenawalt was made a University Professor, Columbia’s highest academic honor and faculty rank, which allowed him to cross departmental boundaries and teach in both the Law School and Department of Philosophy. He was president of the American Society for Political and Legal Philosophy from 1991 to 1993. In 2015, the Law Review held a day-long symposium in his honor and published essays praising his personal and professional contributions to the legal and Columbia communities.

Greenawalt has published four books since 2015, including Exemptions: Necessary, Justified, or Misguided, which addresses the use of religious exemptions from legal obligations, and Realms of Legal Interpretation, which offers a summary of judicial decision-making and a guide to how judges could more uniformly approach public and private law controversies.