Suits in Cuffs: How to Crack Down on Corporate Crime

Enforcement of white-collar crime laws, in decline since the 2008 financial crisis, is at an all-time low because prosecutors lack sufficient resources to pursue executives as well as corporations.

That’s the analysis of John C. Coffee Jr., Adolf A. Berle Professor of Law, whose new book outlines 10 ways in which criminal and civil prosecution of corporations could be more effective, provide a bigger deterrent to future crime, and put more culpable executives in handcuffs.

Corporate Crime and Punishment: The Crisis of Underenforcement (Berrett-Koehler Publishers) arose from Coffee’s Columbia Law School seminar on white-collar crime, which he teaches with Judge Jed Rakoff of the U.S. District Court for the Southern District of New York. “We always come to this theme: Why are there so few prosecutions?” Coffee says. “Why do long and elaborate investigations costing tens of millions of dollars seldom get above the level of the junior lieutenant or maybe the junior captain?”

The answer involves prosecutors without sufficient resources to convict guilty executives, not just corporate entities, Coffee says. As a result, the real work of investigations is delegated to private law firms, retained and paid by the defendant, with the implicit understanding that the effort will result in a deferred prosecution agreement. (Such an agreement is similar to probation.)

“Convicting a corporation is convicting an inactive, inanimate legal fiction,” Coffee says. “Sanctions focused on individuals have much greater deterrent threat, and they will make the next generation of chief financial officers think twice about lying” to the Securities and Exchange Commission. 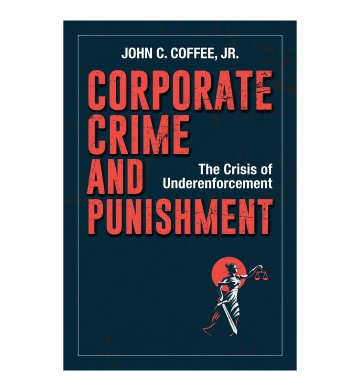 Prosecutors regularly rely on internal investigations of a targeted corporation because federal prosecutors don’t have the resources to fully investigate corporate actions that can involve thousands of transactions, hundreds of people, millions of documents, and a dozen countries. Internal investigations have become a lucrative practice area for law firms, which presents its own conflicts, he says.

“Very few lawyers are prepared to offend the clients they’re seeking to attract. They have to steer a rather delicate course: They have to maintain credibility with the prosecution but not look like they are crusading zealots to the firm that hires them,” Coffee says. “I don’t mean to suggest these firms are covering up. They are just not turning over every leaf. Ambiguous occasional references to senior executives may not get fully followed up on.”

Coffee, the director of the Columbia Law School Center on Corporate Governance, argues that prosecutors should have a greater role in selecting and directing the law firm that conducts an internal investigation (within constitutional constraints), and he wants prosecutors to stop focusing on charging low-level employees in the hopes of eventually getting them to implicate the top dogs.

"Why are there so few prosecutions? Why do long and elaborate investigations seldom get above the level of junior lieutenant?"

Instead, Coffee would arm prosecutors with a criminal sanction harsher than billion-dollar fines: a fine of up to 20 percent of the corporation’s stock issued to a government victim compensation fund. This “equity fine” would shift the burden to shareholders and the corporation itself and spare the firm’s employees and creditors, Coffee says. It’s an idea that is bound to be controversial, but Coffee is unapologetic. This is a threat he believes will persuade a corporate board to plea bargain and identify all of the offenders, even in the C-suites.

To overcome the lack of resources in civil securities cases, Coffee proposes that the Securities and Exchange Commission hire law firms to litigate some cases (under the SEC’s direction) in exchange for a contingency fee based on an eventual penalty.

The SEC “hates the idea,” he says. “It demoralizes them to think that they would need to rely on outside law firms. But they don’t have the manpower to cover more than a fraction of their cases, which is why you sometimes get easy settlements.”

But the SEC does use whistleblower information to initiate investigations, and Coffee proposes that U.S. attorneys and other federal enforcement agencies do the same, including the Consumer Financial Protection Bureau, the Federal Trade Commission, and the Environmental Protection Agency. He suggests the agencies even advertise what kind of information they are looking for. However, expanding whistleblower bounties would require congressional authorization, which, he notes, is uncertain. The trend in pursuing white-collar crime is going in the other direction.

Recent data from Syracuse University shows that white-collar prosecutions have dropped 30 percent during the Trump administration, and corporate fines have plunged steeply. The Trump administration has relaxed standards for leniency in antitrust cases and abandoned the Yates Memorandum, a 2015 Justice Department doctrine requiring corporations to identify every last culprit in an internal investigation in order to earn a deferred prosecution agreement. Now, investigations must only identify those “significantly” involved in wrongdoing—a standard that, Coffee points out, can easily be interpreted not to include top executives who didn’t do the actual dirty work themselves.

But the 2008 financial crisis—when five major banks received government bailouts after engaging in risky securities transactions, but no senior executive on Wall Street went to prison—is a major exhibit for Coffee’s argument that structural reform is needed in addition to political will in order to hold corporations accountable for misdeeds.

“We had this problem in 2008 through 2016 with no one getting prosecuted,” Coffee says. “It’s too simple to blame it all on Trump. This problem will be there whoever the next president is also.”

| CNBC
In The Media