Harvey Miller ’59, a bankruptcy lawyer with Weil, Gotshal & Manges LLP, asserts that billions of dollars were lost overnight because bankruptcy laws no longer provide cover for financial institutions, such as his client, Lehman Bros., which at one time might have renegotiated debt and moved on.

You either have JavaScript turned off or an old version of Adobe's Flash Player.

Get the latest Flash player


View the full panel: "The Propriety and Perils of Bailing Out Failing Financial Institutions"

You either have JavaScript turned off or an old version of Adobe's Flash Player.

Get the latest Flash player 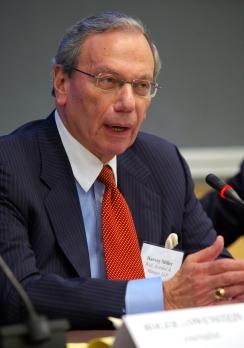 “Economists have predicted the last nine out of five recessions,” Harvey Miller ’59 (left), a partner at Weil, Gotshal & Manges, said, prompting laughter from the crowd. “And then you had Mr. Greenspan, and Mr. Greenspan is a great believer in Ayn Rand and the free market system, and he said, ‘Don’t worry about it – the free market will take care of everything.’ And then you had to take into account a major element, which is greed. A lot of people were making a lot of money during this time and these were very important, influential people, and any time you talked about a scintilla of regulation the forces rose up and said, ‘You can’t do this.’ ”

Panelist Roger Lowenstein, the author of Buffet: The Making of an American Capitalist and a former journalist for the Wall Street Journal, recalled 1997 and 1998, when American banking investments in emerging markets such as Singapore unraveled.

Lowenstein said that recently, “[the banks] found a different emerging market, a different developing nation right inside the border of the United States – a nation I would call the sub-prime nation. Think of all the people who got sub-prime loans together as an emerging nation within our borders who, before, would never have been banked. But bankers convinced people that they were bankable.” Lowenstein continued, “When the panic developed really what we had, in many ways, was a replay of the Asian market crisis. But what is different is that this is the United States and not some fly-by-night developing nation. So we had a lot more confidence.”

Moderator Stephen Friedman ’62, a retired chairman of Goldman Sachs & Co. and current chairman of Stone Point Capital LLC and of the board of directors of the Federal Reserve Bank, put it more bluntly: “We are recidivists,” he said. No one disagreed.

Prominent industry leader Michael Patterson ’67, a retired vice chairman of J.P. Morgan Chase & Co., parried with Miller to provide the audience with the sharpest and most dueling exchanges.

Patterson acknowledged that there was “huge complacency that everybody shared” in causing the meltdown and conceded that “private activity needs some rules of the road,” but that was about as far as he would go. Instead he warned of a coming era of stringent regulations.

Patterson said no regulator or rule could have sufficiently foreseen this crisis and said a push for greater consolidation of the fragmented regulatory structure would do little good. He scolded the board of directors of some of the bankrupt and distressed firms for being “asleep” but then said they, too, were in no position to have averted the crisis.

Patterson also called executive compensation schemes “very inflammatory” but said he does not think that they contributed to the excess leverage of the system. Nor does he think proposals for regulating hedge funds are a good idea. “As a practical matter, we now have to expect an onslaught of new rules and strictures, and I think the challenge is to view them individually and as rationally as possible. So in doing that I think it is important to ask just what we expect a particular regulation to achieve,” he said.

Miller quickly countered. He said the repeal of the Glass-Steagal Act in 1999, which was established in the wake of the Great Depression to separate the banking activities of commercial and investment banks, contributed to the current crisis. “My view is that the financial transaction – these very exotic, sophisticated Kaiser transactions – got so far ahead of the regulators and got so far ahead of the market. And when you hear people like George Soros and Warren Buffet say they don’t understand derivatives, then there is something wrong.”

Rating agencies drew some especially tough criticism from all the panelists who collectively bemoaned the cozy financial relationship between company management and watchdog agencies such as Moody’s, Standard & Poor’s and Fitch. These agencies are supposed to provide independent assessment and measurements of relative credit risk but, according to most panelists, they did not act promptly enough to warn of the coming crisis or, worse, their independence was somehow compromised.

“It is a very fundamental, very simple economic truth that incentives work. Perverse incentives work also — they just happen to work perversely. People play the way they pay them,” said Friedman, the panel’s moderator. “What could be a more flagrant conflict than getting paid by the people who really like triple-A ratings? After a while you think even reasonably honest people are going to veer in that direction. So I think we have to get back to thinking fundamentally like business people about basics like that.”

None of the panelists expressed strong optimism about the ability of the incoming administration to effectively deal with the issues at hand.“If you look at the propensity of Congress in prior crises, the likely thing is you will have quick fixes which will be heavily influenced by every lobbyist on K Street that will be coming out there,” Friedman said.

Earlier in the day professor Edward Rock of the University of Pennsylvania Law School and Ronald Gilson, a professor at both Columbia Law and Columbia Business Schools, discussed “Picking Your Shareholders.” Following their talk Michael Weisbach of Ohio State University and Morten Sorensen of Columbia Business School discussed the findings of their report “Leverage and Pricing in Buyouts: An Empirical Analysis.”

Lowenstein and Friedman said the markets — and financial institutions that guided them — fell victim to Winston Churchill’s age-old quote: Those that fail to learn from history, are doomed to repeat it.