In his new book, Mine! How the Hidden Rules of Ownership Control Our Lives, Professor Heller explores the laws and norms that govern everything from disputes with neighbors to climate change mitigation.

“Mine!” is a primal cry that ricochets through sandboxes and playgrounds around the globe. “It’s one of the first words children learn,” says Michael Heller, Lawrence A. Wien Professor of Real Estate Law and co-author of Mine! How the Hidden Rules of Ownership Control Our Lives (Doubleday, March 2021).

Heller and his co-author, James Salzman, an environmental law professor at the University of California, Los Angeles, set out to write “Freakonomics for ownership” to show readers how ownership affects every aspect of their lives, every day. “We swim in ownership rules that are omnipresent and invisible at the same time,” says Heller, a preeminent scholar of private law theory. “Ownership is about who gets what and why. The central idea of the book is that what people consider ‘mine’ is not something fixed or natural. It’s always a choice and always up for grabs.”

Governments, businesses, and ordinary people are constantly jostling to change the rules for ownership. Each change creates winners and losers, which has been the case since time immemorial. “At its core, human society exists to help us deal with competing claims to scarce resources—whether food, water, gold, or sexual partners—so we don’t kill each other too often,” says Heller.

Yours, Mine, or Ours?

Heller says that, remarkably, there are just six simple sayings that everyone uses to claim ownership over everything in the world: First come, first served. Possession is nine-tenths of law. You reap what you sow. My home is my castle. Our bodies, ourselves. The meek shall inherit the earth. 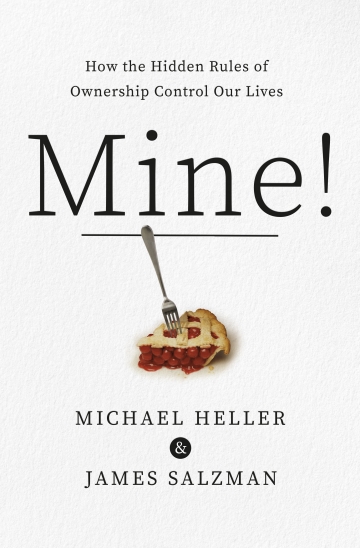 In Mine!, the authors tell dozens of vivid stories that are variously entertaining, infuriating, or counterintuitive—and sometimes all three—to show how owners use these stories as the basis for savvy ownership design to steer us to do what they want.

One gripping story (and one many likely identify with) examines what happens when an airline passenger tries to recline her seat and the person behind won’t cede his knee space. The airlines know that squished passengers will assert competing ownership stories: The recliner says the recline button controls the space attached to her seat while the passenger behind claims to possess the space at take off. “This is an example of airlines using an ownership design tool we call ‘deliberate ambiguity.’ Ambiguity lets airlines sell the reclining wedge of space twice on every seat on every flight and forces passengers to sort out the conflict,” says Heller. “Even better for the airlines, the squeeze in economy creates a market for high-priced seats up front.”

In an interview two weeks before the publication of Mine!, Heller offered answers to some thorny conundrums discussed in the book.

The exact same ownership stories that kids assert on the playground and that adults use in tussling over airplane seats also determine the outcome of our most challenging issues, including data privacy, climate change, and race and wealth inequality. “When you send a saliva swab to 23andMe or Ancestry.com to find out inherited traits or build a family tree, you are handing them control of your genetic data,” says Heller. “Your data is the raw material for their business. They aggregate and sell it to pharmaceutical and insurance companies. 23andMe is relying on the labor story—you reap what you sow—to claim your data: It’s theirs because they did the work to assemble it into useful databases. But we can push back with the self-ownership story—the data comes from our bodies.”

Ownership of new resources, like wind and solar power potential, is often awarded to existing landowners. “This is the attachment principle at work—‘It’s mine because it’s attached to something that’s mine’—and it automatically and quietly makes the rich richer,” says Heller. “Attachment can work like a ‘wealth magnet,’ as my Columbia Law colleague Thomas Merrill has written.” On the flip side, says Heller, smartly designed attachment rules offer the best hope for addressing climate change, for example by giving rainforest dwellers in the Amazon a reason to leave trees standing. Says Heller, “Attachment is the most important ownership story you’ve never heard of.”

“Attachment is the most important ownership story you’ve never heard of.”

Heller argues that our everyday ownership conflicts are storytelling battles, and they’re mostly taking place outside the law and the courts. “By a million to one, people just work these disputes out themselves,” he says. “Politeness and good manners, customs and norms are the real life of ownership. Law is mostly irrelevant. And the prize goes to those who know how the hidden rules of ownership really work.”

Property as a Social Good

Heller’s interest in how property rights affect people’s lives dates back to his undergraduate days at Harvard, when he worked on projects to design drinking systems for rural towns in Latin America. As a student at Stanford Law School, he did similar work on housing finance for poor communities in Bangladesh. After receiving a J.D., he spent four years at the World Bank, where he was part of a team that assisted Eastern European countries after the fall of communism. “We’d try to help new governments figure out what they could do to create property rights for land and housing that would be equitable and also effective for a market economy,” he says.

His work at the World Bank led to an invitation from Yale Law School Professor Robert Ellickson to co-teach a course on creating capitalism. Heller then went on to teach at the University of Michigan Law School before joining the Columbia Law School faculty in 2002. “From the beginning, my teaching and scholarship has focused on property and land and how to use the law so that the most marginalized people can get more access to the stuff we all need,” he says.

Heller hopes that Mine! will empower readers “to be more effective advocates for change as parents, as consumers, and, importantly, as citizens,” he says. “Once they see how ownership works, they won’t be able to unsee it.”

Listen to Michael Heller talk about Mine!

Michael Heller on a Scholar's Responsibility

"Academics have an obligation not only to advance scholarship through journal articles and books but also to produce writing that is accessible to people outside the academy and that aims to make a difference out in the world," says Heller. He chuckles when describing the targeted appeal of his previous academic book, The Choice Theory of Contracts (2017) with Hanoch Dagan of;Tel-Aviv University Faculty of Law.  “It was aimed at about 25 people, and by the time it was published, I thought I knew by name every likely reader—I was thrilled when a 26th person was interested in it and shocked when a thousand more bought copies.” Before writing Mine! together, Heller and Salzman wrote books aimed at popular audiences: Heller’s The Gridlock Economy: How Too Much Ownership Wrecks Markets, Stops Innovation, and Costs Lives (2008) and Salzman’s Drinking Water: A History (2017).

Who Owns Your Online Life? It’s One of the Central Questions for Our Time

| The Globe and Mail
In The Media

Episode 95: Michael Heller | Ownership: What It Is, and What It Isn’t

| UnSILOed with Greg LeBlanc
In The Media