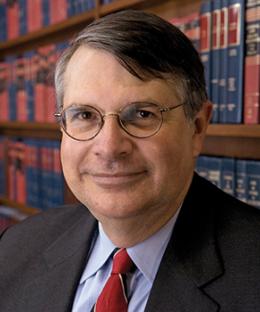 One of the most cited legal scholars in the United States, Thomas Merrill teaches and writes about administrative, constitutional, and property law, among other topics.

Merrill’s experience in the public and private sectors informs his pedagogy and research. After clerking for Chief Judge David L. Bazelon on the U.S. Court of Appeals for the D.C. Circuit and for Justice Harry A. Blackmun on the U.S. Supreme Court, Merrill was a deputy solicitor general of the U.S. Department of Justice and an associate at the firm of Sidley & Austin LLP, where he also served as counsel for more than 20 years.

He has written scholarly articles and several Supreme Court amicus briefs on when and how much weight courts should give administrative interpretations of law in different contexts.

He has co-authored (with Henry E. Smith) the casebooks Property: Principles and Policies and The Oxford Introductions to U.S. Law: Property. His seminal journal articles include “Optimal Standardization in the Law of Property: The Numerus Clausus Principle” on the role of information costs in the structure of property law and “The Origins of the American Public Trust Doctrine: What Really Happened in Illinois Central” about the role of public property rights in the development of the Chicago lakefront. For the 125th anniversary celebration of the 2nd U.S. Circuit Court of Appeals, Merrill delivered the annual Hands Lecture, and he spoke on “Learned Hand and Statutory Interpretation: Theory and Practice.” Lakefront: Public Trust and Private Rights in Chicago (Cornell University Press), his book (with Joseph Kearney) on the history of the Chicago Lakefront, was published in May 2021. Merrill is currently serving as a co-reporter for the American Law Institute’s Restatement (Fourth) of Property.

In addition to Columbia, Merrill has served on the faculties of Northwestern Law School and Yale Law School. He is a member of the American Law Institute and the American Academy of Arts and Sciences.

How did Chicago, a city known for commerce, come to have such a splendid public waterfront—its most treasured asset? Lakefront reveals a story of social, political, and legal conflict in which private and public rights have clashed repeatedly over time, only to produce, as a kind of miracle, a generally happy ending. Merrill and co-author Joseph D. Kearney of Marquette University Law School study the lakefront's evolution from the middle of the 19th century to the 21st. Their findings have significance for understanding not only Chicago's history but also the law's part in determining the future of significant urban resources such as waterfronts.

Order of the Coif

The Law School will co-host a special session of the court, the Hands Lecture, and a private dinner to celebrate the 125th anniversary of the 2nd Circuit.
In The Media

Who Should Regulate? A Review of “The Chevron Doctrine”

Can the Raucous History of Chicago’s Lakefront Teach Us How to Preserve Land for Public Use?