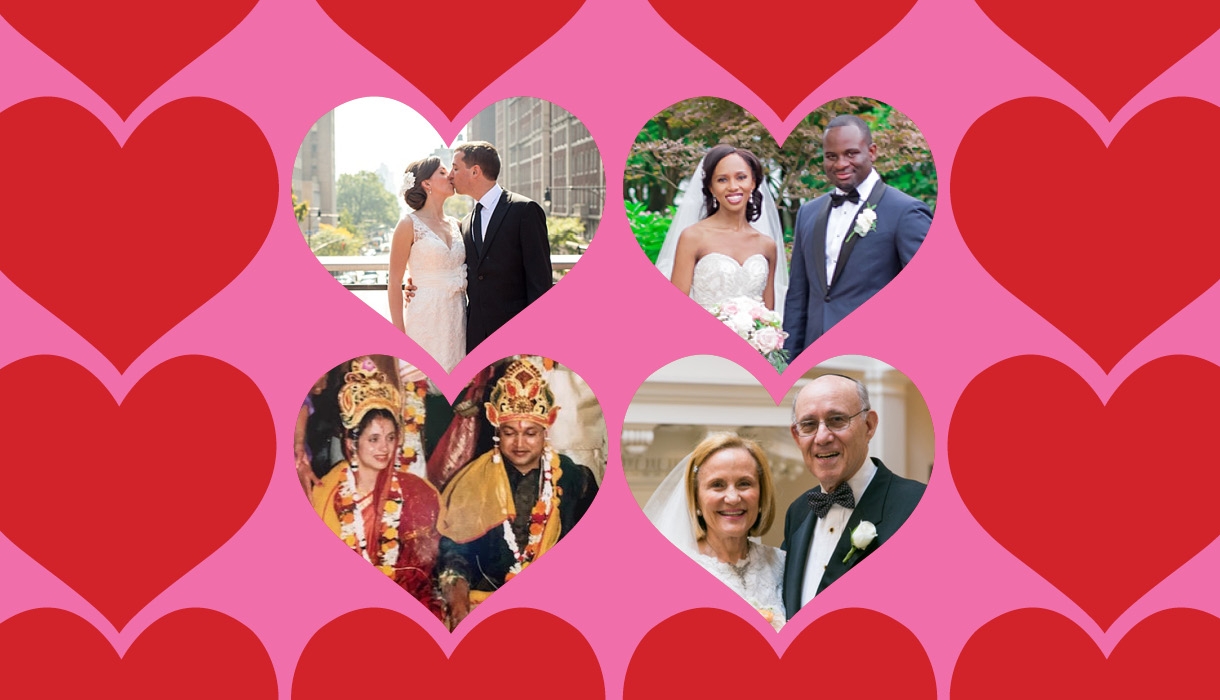 Classes had not yet begun in late summer 2007 when Mikhaile Savary first noticed Samara Penn outside Jerome L. Greene Hall. “She was standing by the Columbia Law School sign, and she kind of took my breath away,” recalls Mikhaile, who is now a sports and entertainment lawyer with Mountain Professional Services Group. “She was stunning and had this amazing stature and presence. But it was a fleeting thing I tucked away in my memory.”

A few weeks later, Mikhaile struck up a conversation with Samara in the Arthur W. Diamond Law Library. They discovered that they were both planning to attend an upcoming retreat organized by the Black Law Students Association (BLSA). “The retreat is where we first talked at length,” recalls Samara, who is now senior counsel at Bristol Myers Squibb. “A few weeks after that, we were ‘officially dating.’”

They became each other’s study buddies too. “We’d quiz each other and do a lot of things as a team,” says Mikhaile. But they only took one class together—family law. “I got the better grade,” says Mikhaile, before Samara interjects: “But he used my notes.”

After Mikhaile graduated and took a job in Los Angeles, the couple maintained a long-distance relationship for about three years. In 2015, Mikhaile was back in New York working at Mountain PSG and had one of Samara’s colleagues invite her to participate in a BLSA affair at the Law School on a Friday evening. “I was working at Kirkland & Ellis and often represented the firm at these events,” says Samara, who had no idea the invitation was a ruse. She got out of a cab at the corner of 116th Street and Amsterdam Avenue and rushed by a man playing saxophone. But when she heard her name, she turned around and saw Mikhaile. He proposed, accompanied by the saxophonist playing the Platters’ “Only You.” Mikhaile even hired a videographer to document the moment. When they were married, in 2016, one of the bridal gifts that Mikhaile gave Samara was a gold bracelet engraved with the geographic coordinates of the Law School to commemorate where their life together began.

Their sumptuous 2016 wedding at the Ashford Estate in New Jersey was a true family affair. Samara’s mother made the flower girl’s basket and the broom the couple jumped over in the African American tradition; Mikhaile’s mother made guava jelly as a party favor for the guests—a nod to their family’s Caribbean heritage. Samara and Mikhaile come from big families, so most of the 175 guests were relatives. (Mikhaile’s mother has nine brothers and sisters, and his father has 12; Samara’s mother is the youngest of 13.) “We love the magnificent shot our photographer got where we literally squeezed in everyone who was there,” says Mikhaile.

Now living in New Jersey, they continue to help each other become better lawyers, just as they did at Columbia Law. “We run hypotheticals by each other,” says Mikhaile. “It’s just great to have such a sharp legal mind here with me. It makes work, as I say, a labor of love.”

Instead of attending their 45th Law School reunion in 2017 in New York, Mark Kahan and Carol Mates got married in Washington, D.C. “It was the only weekend in June that some family members didn’t have conflicts and the Carnegie Institution for Science, where we wanted to have the wedding, was available,” says Carol, who’d never before missed a reunion.

When Carol and Mark met, on Match.com in 2013, they knew from each other’s profiles that they’d both gone to Columbia Law School, but they did not know they had been classmates. “I’d made myself six years younger on my profile because everyone told me that men over 60 don’t date women their own age,” explains Carol. After corresponding anonymously, they arranged a date, and Mark asked Carol to choose the restaurant. She made the reservation on OpenTable and emailed him the confirmation, which included her name.

The name rang a bell: Mark remembered a “Miss Mates” who had sat three rows ahead of him in their first-year section. So when they met at the restaurant, Carol was surprised when Mark said, “I believe we may have met before,” and ribbed her about not giving her real age. They discovered they had plenty in common as D.C.-based lawyers. “Neither of us are litigators!” he notes. “And we have both spent significant parts of our careers in the public sectors.” Carol, now an adjunct professor at Georgetown University Law Center, was the longtime principal counsel at the International Finance Corporation, the private sector affiliate of the World Bank; Mark, now a professorial lecturer in the department of government at American University and senior counsel with HCH Legal, had worked as vice chairman, general counsel, and chief operating officer of Spirit Airlines and associate director, Legal, Economic, and Regulatory Affairs, for the U.S. Civil Aeronautics Board.

Mark was widowed in 2012, but Carol had never married, so they decided to have a big, traditional Jewish wedding. She wore a white dress with a veil, and he wore a tuxedo with a white rose boutonniere.

They plan to attend their 50th reunion together next year, which will be the first time most of their classmates will greet them as husband and wife. “Actually, it will be the first reunion I’ve ever attended,” says Mark. “One of the many great things about marrying Carol is that she kept up relationships with many of our classmates, and now I am reconnecting with them, too.”

It was Nicholas Duston’s roommates who spotted Casey Boyle at a Law School orientation icebreaker and encouraged him to talk to her. “I was single, and they were trying to help me out. The first thing they noticed was that she was shorter than I am,” says Nick (5 foot 6). “It was love at first height.”

Casey (5 foot 2) and Nick happened to be in the same Legal Methods section and began studying together. Soon they were dating. They bonded over their similar middle-class upbringings—Staten Island for her, northern Connecticut for him—and being the first ones in their families to attend law school. “Having Nick really helped me get through law school, which would have been a very challenging time if I had to do it alone. It’s a lot to navigate,” says Casey.

The couple leaned on one another every bumpy step of the way. “One source of tension was that I had to work really hard to get good grades, and it came more effortlessly for Nick,” says Casey, who is now counsel in Riker Danzig's insurance and reinsurance practice. “I would be crunching these outlines for hours, and he would read through my outline once and get an A plus.” Nick, a litigator at Norris McLaughlin, is quick to give credit where credit is due. “I cheated,” he says. “I cheated by dating someone who wrote really good outlines.”

After graduation, they moved to Astoria, Queens, where they studied for the bar exam in a tiny apartment. “After we took the bar, we got into a 10-year-old Corolla and took a road trip to California and back,” says Nick. “So after being together 24 hours a day studying, we celebrated by spending 24 hours a day together in the tiniest car we could find.”

When Nick dropped Casey at her parents’ house after the six-week trip and started driving to his parent’s house to return the car, he missed her immediately. “I knew then we were definitely going to get married. But we didn’t get engaged for a couple of years because we dove into working at these Big Law firms, and it was a time warp.”

They returned to Morningside Heights for their 2013 wedding, holding the ceremony at St. Paul’s Chapel and the reception at Faculty House. “We had a lot of pictures taken around campus because that is where we started out together,” says Casey. Eventually, they moved to New Jersey, where they are raising their two preschool-age children.

For better and worse, their legal training is woven into the fabric of their marriage. “When we disagree, we tend to depose each other,” says Casey. “It’s like, ‘Bring the evidence, bring the motions with the exhibits, show me what you’ve got.’”

When Valérie Demont was studying law in her native France, she took a course with a visiting Columbia Law professor, Jane C. Ginsburg, who encouraged her to consider the LL.M. Program at Columbia. Valérie had wanted to study in the United States to become familiar with the common law system and the U.S. way of doing business. “It seemed to me that around the world, business was done on U.S. terms more than anything else,” says Valérie, who is now a partner in the corporate practice group at Sheppard Mullin. “I picked Columbia in particular because I had studied Chinese and wanted to take advantage of the programs and faculty at the Center for Chinese Legal Studies” (now the Hong Yen Chang Center for Chinese Legal Studies).

Bal Das received a law degree from Delhi University, in India, and he was studying for a master’s in intellectual property at Franklin Pierce Law Center in New Hampshire when he decided to apply to the LL.M. Program. He’d long romanticized Columbia University because it was in New York City and where Bhimrao Ramji Ambedkar received his Ph.D. in political science. “Dr. Ambedkar was the genius behind the Indian Constitution, which I have always thought was one of India’s greatest assets,” says Bal, who is now chairman of BGD Holdings LLC. “He was the animating spirit, our Thomas Jefferson, the man who put pen to paper, and he had studied at Columbia!”

When they matriculated at the Law School in the summer of 1994, neither Valérie nor Bal intended to stay in the United States after receiving their degrees. “But then we met, and things just took a different turn altogether,” says Bal. “We had so much to talk about, so many things we shared in common.” Their whirlwind romance played out mostly on campus. “To be honest, we spent a lot of time in the library,” says Valérie. “After graduation, we just moved in together, and that was it.”

They don’t recall ever formally getting engaged, but they have vivid memories of their two weddings. In 1998, they were married in their New York apartment surrounded by their immediate families from overseas and a few close friends. “We made it a three-day discover-New-York type thing, and it was super fun,” says Valérie. “We walked across the Brooklyn Bridge. We had a dim sum brunch in Chinatown and another brunch at the River Café. The whole wedding party went to see the musical Chicago. That’s what you can do when you have a small wedding.”

Two years later, 1,000 guests attended their wedding in India, including several of their Columbia LL.M. classmates. “It was a grand wedding but not ostentatious,” says Bal. “It was a lot of fun, filled with curious people getting to know each other and learning about different cultures, and that has been the narrative of our lives.”

The Partnership Track: Couples Who Met at Columbia Law

For Valentine’s Day 2020, three alumni couples who fell in love as students and married after graduation share their stories.

Partners for Life: Marriages Made at Columbia Law