Meher Dev ’19 LL.M., who has advocated before the Supreme Court of India, was awarded a $50,000 scholarship by the global law firm.

New York, Nov. 7, 2018—Meher Dev ’19 LL.M., a human rights lawyer dedicated to expanding women’s and minorities’ rights and clinical legal education in India, was named the recipient of the 2018 Baker McKenzie scholarship. The scholarship, established in June 2015, awards $50,000 to an LL.M. student who demonstrates academic success and financial need. 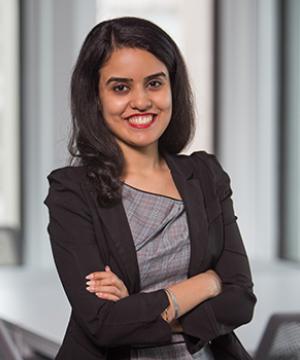 “We are delighted about awarding this year’s Baker McKenzie Scholarship to Meher Dev,” said Constanze Ulmer-Eilfort, Executive Committee member and Global Chair of Diversity and Inclusion at Baker McKenzie. “We are honored to provide an opportunity to such a bright and dedicated candidate, who has demonstrated an inspiring passion for advancing diversity and inclusion in the legal profession. Meher's consistent efforts to advocate for women and minorities, mentor students in human rights law, and advance these initiatives through the creation of legal education clinics in her home country make her an exemplar of the very reasons for developing this scholarship program.”

Dev’s vocation as a human rights champion sprang from her experiences growing up as a member of the Sikh community in India. Throughout her childhood, Dev heard stories from her grandparents who came to India as refugees about the injustices Sikhs faced during the partition of India and the Sikh genocide. From a young age, Dev felt she was at a disadvantage because she was a girl who belonged to a religious minority and also witnessed women around her being discriminated against because of their gender and minority status.

“Despite growing up in much more stable times than my grandparents did, I felt vulnerable for being a girl. I saw that women and girls around me faced sexual harassment at their schools and their workplaces and I felt a similar vulnerability due to lack of access to legal remedies,” Dev says.

“I reminded myself of the courage and efforts with which my family accessed education and achieved economic stability that gave me opportunities to live in a better world and help fellow members of society. I decided to overcome the adversities I faced and to help women and minority communities by bridging the lacking access to law by becoming a human rights lawyer and by building capacity for human rights lawyers to represent voices of women and minorities.”

Supported by a merit scholarship, Dev pursued her dream of becoming a women’s rights lawyer at Jindal Global Law School in Sonepat, India. As a law student, she founded an organization with like-minded peers called Women and Law Society that provided pro bono legal assistance to women who worked at the law school or lived in the surrounding rural area. The group’s work included undertaking socio-legal awareness drives and developing policies on equal pay and sexual harassment.

After graduating in 2014, Dev—who speaks five languages—continued her advocacy in the private sector and worked with a corporate law firm to advise nonprofit clients and to expand the firm’s pro bono practice. She then became an advocate for the chamber of Indira Jaising, a senior advocate of the Supreme Court of India and a former member of the Convention on the Elimination of all Forms of Discrimination Against Women (CEDAW) Expert Committee.

Joining Jaising’s chamber allowed Dev to work on complex cases concerning women’s rights to political participation, work, and sexual and reproductive health. In 2017, Dev was part of the team that successfully convinced the Supreme Court of India to invalidate the practice of triple talaq, an Indian Muslim practice by which a man could instantaneously end a marriage by uttering talaq—“divorce” in Arabic—three times.

In an effort to institutionalize and build capacity for human rights lawyering, Dev established a mentoring program at Jaising’s chamber for law students interested in a career in human rights law and mentored 10 students in the program.

Prior to studying at Columbia Law, Dev was a research and teaching assistant at the National Law University in Delhi, India. She worked closely with the Center for Reproductive Rights and the Centre for Constitutional, Law, Policy and Governance at National Law University to create a reference book for reproductive rights case laws in India that would also serve as a text for the first course on reproductive justice in an Indian law school.

Based on her passion and commitment to human rights, she was awarded a 2018-2019 Columbia Law School Human Rights LL.M. fellowship.

Through this fellowship, Dev is assisting Professor Sarah Knuckey and Columbia Law’s Human Rights Clinic on a project focused on advancing gender justice for victims of sexual abuse in mining-affected regions in Papua New Guinea. She is also assisting JoAnn Kamuf Ward, director of the Human Rights in the U.S. Project and a lecturer at the Law School, on a project that assesses New York City laws’ alignment with CEDAW. Dev plans to use the Human Rights Clinic as a model to set up clinics in India’s law schools that engage in domestic and international advocacy to secure the rights of women and minorities.

Priority for the Baker McKenzie scholarship is given to international students who have overcome barriers to achieve in the field of law, particularly those raised or educated in emerging nations. Last year’s scholarship was awarded to international criminal lawyer Dounia Hattabi ’18 LL.M., who is now a legal fellow at Asia Justice and Rights in Timor Leste.

“Receiving recognition from Baker McKenzie reinforces my belief in the collaborative ways in which human rights lawyers and corporate lawyers can support each other’s work,” says Dev.