Graduation 2018: Highlights of the Day

On May 14, J.D. and LL.M. students from the Class of 2018 had their graduation, with former U.S. Secretary of Homeland Security Jeh Johnson ’82 delivering the keynote. 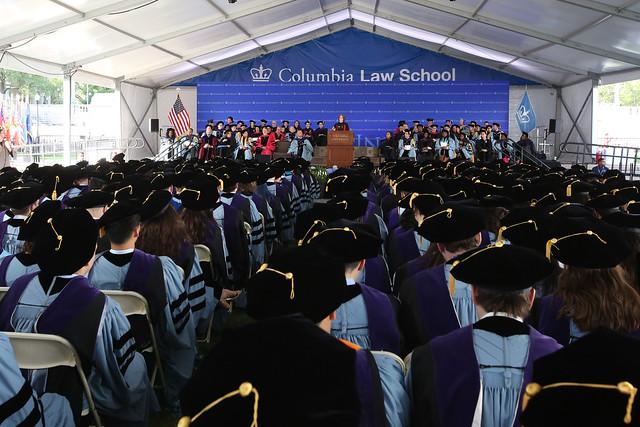 On a gloriously sunny May 14, the jubilant Columbia Law School Class of 2018 celebrated its graduation. In massive tents on the South Lawn of Columbia’s Morningside Heights campus, more than 4,000 friends and family cheered on the students. 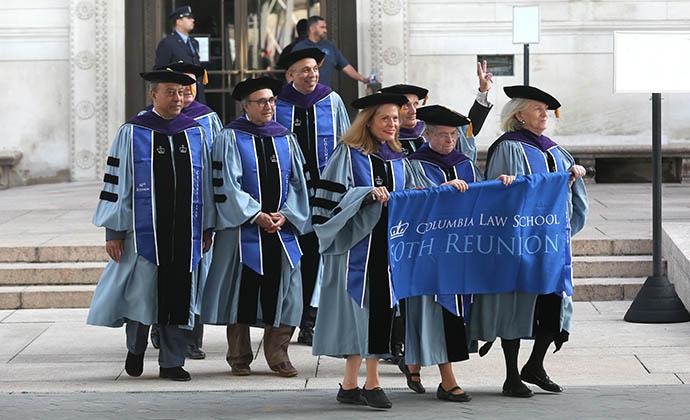 The processional of faculty, administrators, and more than 700 J.D. and LL.M. candidates also included a delegation from the Class of 1968, which will celebrate its 50th reunion next month. 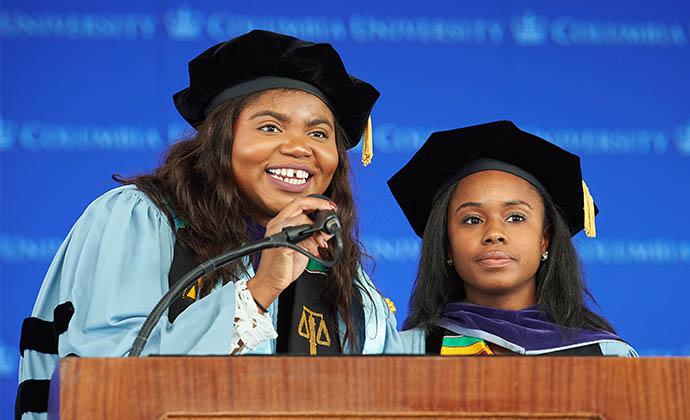 The ceremony commenced with a welcome from Graduation Committee Co-Chairs Mica Rollock ’18, right, and Patricia Okonta ’18. 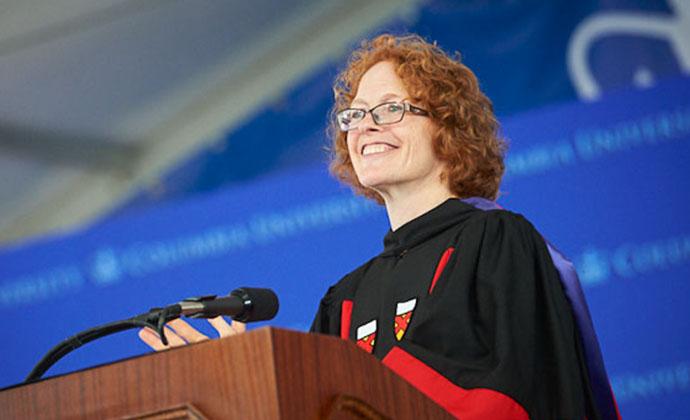 “Graduates, you’ve worked very hard to reach this milestone. All of us here on the stage—and the generations of Columbians who have come before you—stand together in saluting you today,” said Gillian Lester, Dean and the Lucy G. Moses Professor of Law, in her address to the Class of 2018. “Wherever your Columbia law degree may take you … as advocates, negotiators, mediators, dealmakers, and diplomats—speak, but also listen and hear what others have to say. Use your mastery of the law and the power of language to lead us all to a greater understanding of one another and to help us bridge our divides.” 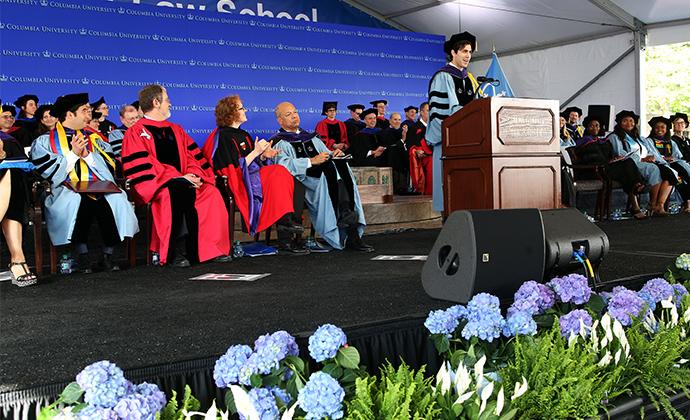 “This place has given me so much,” said Student Senate President Ramsey Fisher ’18. “A fantastic legal education. Some of the best friends I will ever have." And, he added, a T.A. in his contracts course who became his fiancée, eliciting cheers and applause from the audience. 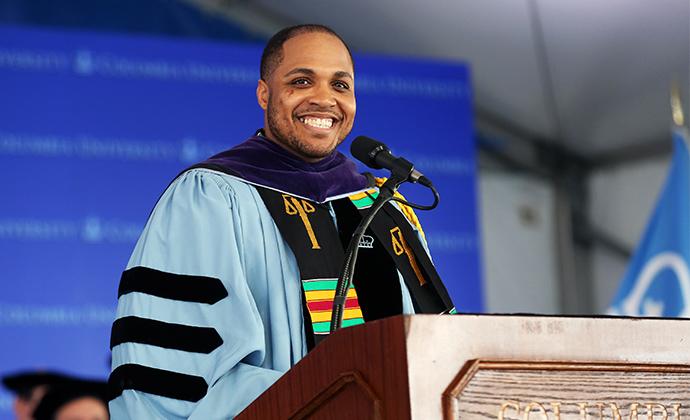 Romane Paul ’18, the J.D. Class Speaker, exhorted his fellow students to “please do everything you can to be part of what is right.” He concluded his speech by singing a cappella “Lift Every Voice and Sing,” by James Weldon Johnson, which received a standing ovation. 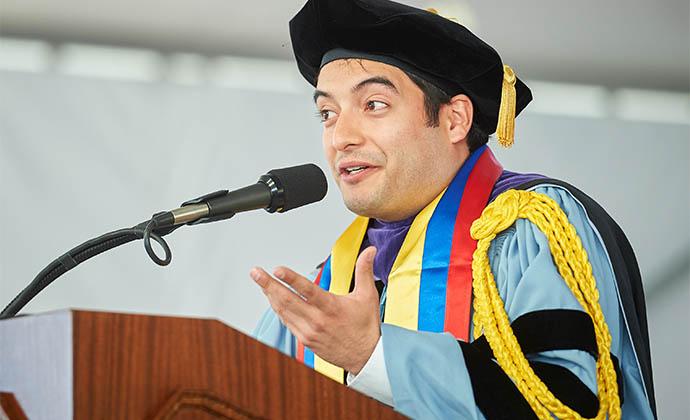 “I cannot sing like that, so I am just going to talk,” said Fuad Gonzalo Chacón Tapias ’18, the LL.M. Class Speaker, who quoted from the chorus of a song he grew up singing in his native Colombia. “Siempre adelante, ni un pasos atrás: Always forward, not a step back.” 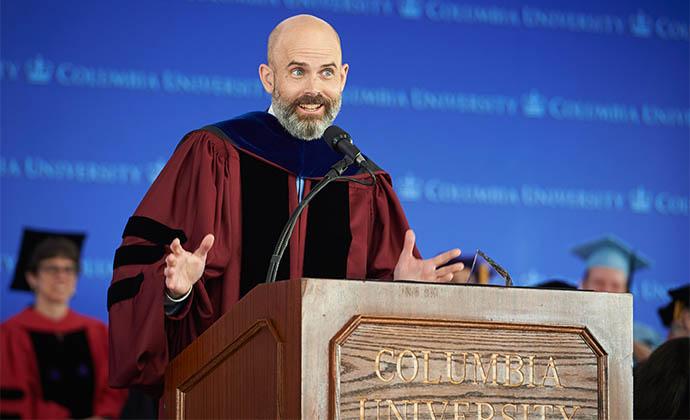 The Class of 2018 voted to award the Willis L.M. Reese Prize for Excellence in Teaching to Edward R. Morrison, the Charles Evans Gerber Professor of Law, and his wise, humorous, and heartfelt speech made it clear why he is such a popular professor. “Ask yourself at least once per year, What do you hope to get out of your career?” advised Morrison. “To change an area of law? To become a creative dealmaker? To understand the needs of your clients so well that you become a leader yourself? Keep that goal ever present in your mind. The law is too interesting a place to wonder, ‘How did I get here?’” 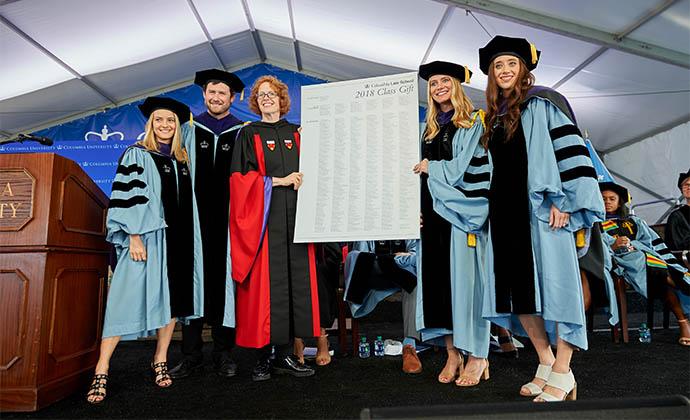 The Class Gift—with donations from 72 percent of students—was announced by Carly Goeman ’18, Kathryn Kennedy Bleday ’18, Giulia Rimoldi ’18 LL.M., and Diego Navarrete ’18 LL.M, who presented Dean Lester with a scroll with the names of the 548 donors. Olatunde Johnson, Vice Dean for Intellectual Life and Jerome B. Sherman Professor of Law, announced the Prizes and Awards for members of the Class of 2018. 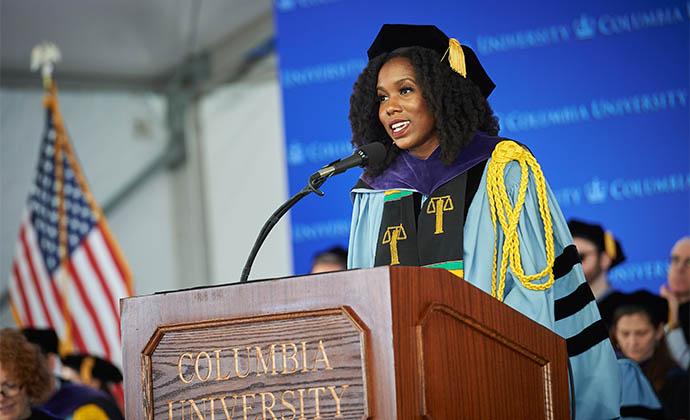 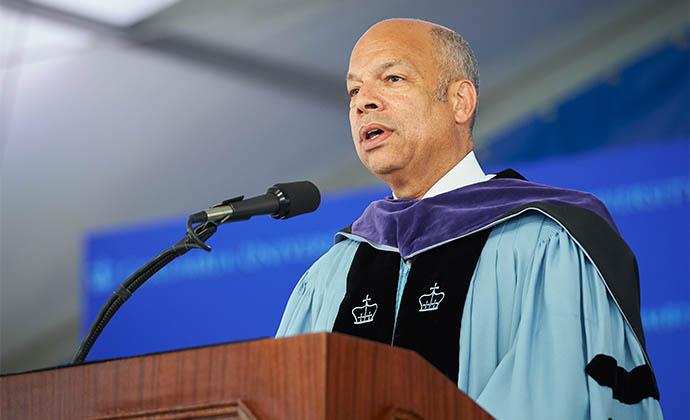 “Rededicate yourselves to treating others with respect,” said Johnson, who is a partner in Paul, Weiss, Rifkind, Wharton & Garrison. “Tolerate and celebrate the diversity of this nation. Respect those who are different and encourage others to do the same.” 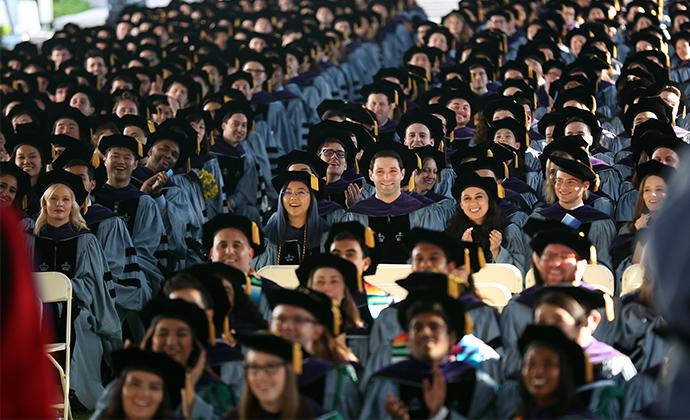 As they crossed the stage to be congratulated by Lester and Johnson, students cheered one another as their names were announced by Dean of Admissions Nkonye Iwerebon ’93, Dean of Student Services Yadira Ramos-Herbert, and Dean of Graduate Legal Studies Sylvia T. Polo. 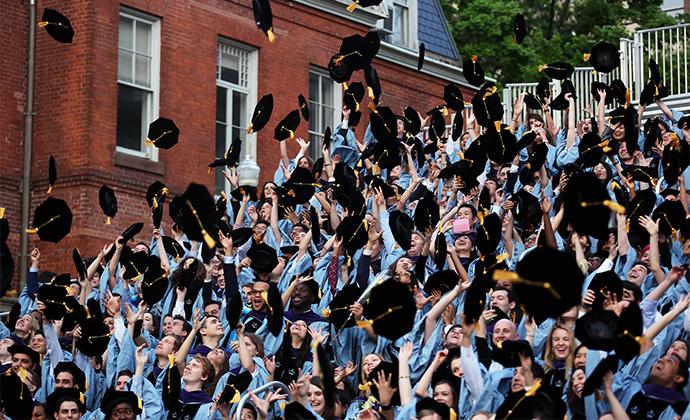 After the recessional and the class picture, the Class of 2018 joined friends, family, and faculty for a reception under the tents on Ancel Plaza.