Faculty, friends, and family gather to celebrate the beloved professor and influential scholar upon his retirement. 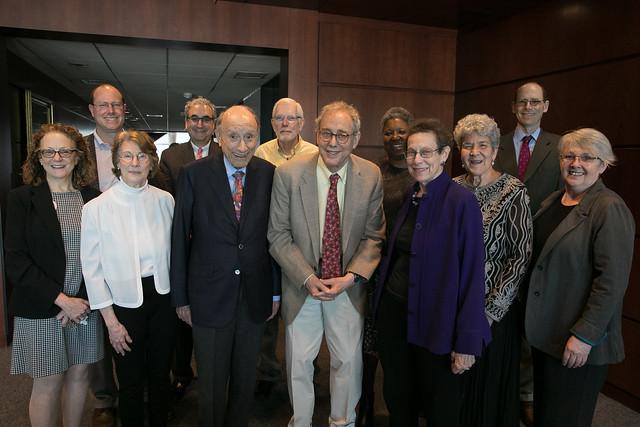 Lance Liebman, the former dean of Columbia Law School who spearheaded a spate of groundbreaking initiatives during his deanship, from 1991 to 1996, was honored at a jubilant retirement luncheon on April 25. Friends, family, former students, the faculty, and senior administrators gathered to extol Liebman’s intellectual gifts and personal charm, as well as his myriad contributions to the school over the course of 28 years as a professor here.

“In many ways, Lance brought Columbia Law School into the modern era,” said Gillian Lester, Dean and the Lucy G. Moses Professor of Law, citing the more than $80 million he raised for the renovation and expansion of Jerome Greene Hall. (The building remained operational during construction; Liebman cleverly issued Columbia-blue hard hats to the entire student body.)

“Less visibly but with no diminished impact, Lance’s deanship also ushered in a new way of thinking about the connection between the Law School curriculum and legal practice,” said Dean Lester. “He instituted a first-of-its-kind rule requiring each student to complete 40 hours of pro bono work in order to graduate. He presided over new courses in ethics and professional responsibility. And he established new student-facing administrative offices to oversee public interest law, international programs, and student services.” Dean Lester also enumerated Liebman’s array of scholarly accomplishments—from his path-marking casebook that ushered in a new stand-alone field of employment law as distinct from labor law to his 15 years as director of the American Law Institute (ALI).

The luncheon was a salute to Liebman’s sterling character and endearing personality, a tribute to a beloved figure The New York Times once reported has “a goofy and infectious laugh” and “drops names aplenty, but naturally and inoffensively.”

Siobhan Kennedy, who was Liebman’s assistant for 15 years, attested to the former dean’s equanimity. “I don’t recall Lance ever having a bad day,” she said. “He had difficult days. He had challenging days, even sorrowful days. But he remained optimistic, encouraging, and good-humored.” Their friendship has endured even though she left the Law School in 2006. “That’s a testament, surely, to Lance’s remarkable capacity for something that is rare in the workplace. That is love,” she said.

Marisa Lago, the chair of the New York City Planning Commission, introduced herself as “part of a large and passionate group of Lance acolytes” he taught during his 21 years as a professor at Harvard Law School. “For a generation of Harvard 1Ls, Lance is so ever-fondly remembered as our property law professor as well as our favorite professor,” she said. “Being taught by Lance meant being ensnared by his intellectual curiosity, his genuine goofiness, his knack for seeing the best in each of his students.”

It has also meant occasional invitations to ice cream parties that he and his wife, Carol Liebman, a Columbia Law Clinical Professor Emerita of Law, hosted at their rambling house in Newton, Massachusetts.

Lago attributed her public service career to Liebman’s tutelage and a section he taught on land use, zoning, and urban renewal, which sparked her imagination. “I was on fire,” she said. “Lance inspired this notion that government was a powerful force for ill or good,” she said. After Lago graduated, Liebman introduced her to the chair of the New York City Planning Commission, Herb Sturz, who hired her as a special assistant. “And 35 years later, thanks to Lance—who I can never thank enough—I was able to return from the Obama administration to serve in the exact same role as Herb Sturz.”

Gerard E. Lynch ’75, the Paul J. Kellner Professor of Law, who served as vice dean under Liebman, introduced a faculty resolution to commemorate Liebman’s accomplishments, which include an “Ivy League trifecta”—a B.A. from Yale (where he was chairman of the Yale Daily News), a J.D. from Harvard (where he was president of the Harvard Law Review and where he taught after clerking for Supreme Court Justice Byron White), and the deanship of Columbia Law School. The audience chortled when Lynch praised Liebman for “populating our numbers with members of his own family”—his wife oversaw the expansion of the Law School’s clinical programs, and his son Benjamin is the director of the Center for Chinese Legal Studies. During his deanship, Liebman also hired 10 other professors, including current faculty members Kimberlé Crenshaw, Charles Sabel, and Carol Sanger.

Lynch encouraged the audience to watch the video tribute ALI produced when Liebman stepped down as its president, in 2014. Under his leadership, ALI produced and published new restatements in the areas of agency, property, trusts, restitution and unjust enrichment, torts, and employment law. “The expert scholars he recruited to serve as reporters for these projects testified with virtual unanimity. . . to Lance’s judgment, acuity, and persistence in pushing these projects to completion,” Lynch said.

“Brilliance is one feature that shows up whenever people speak about Lance,” he continued. “But equally we hear words like jovial, unassuming, self-deprecating, kind, and gregarious. To sum it all up: a mensch.”

The guest of honor was visibly moved by the tributes, and, true to form, he was humorous in thanking the assembled guests: “Well, as Lyndon Johnson said, relevant to all these things that have been said in the last hour, my father would have loved it and my mother would have believed it.” 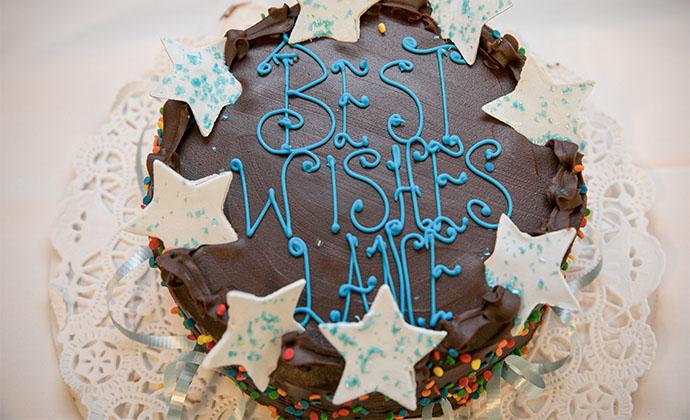