Doing ‘What Lawyers Are Supposed To Do’ 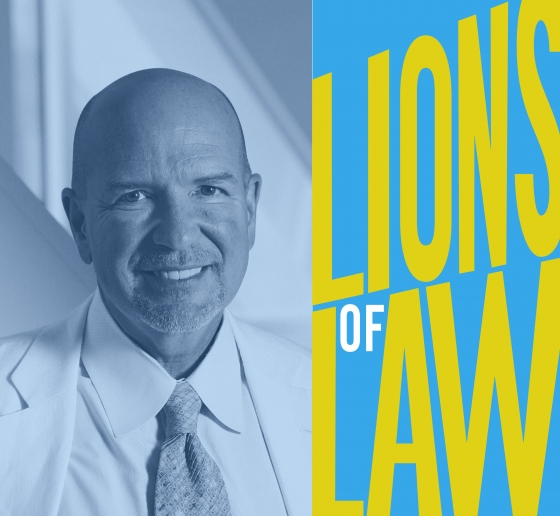 In more than 40 years of pro bono lawyering Allan Van Fleet ’77 has learned to immerse himself thoroughly when he takes on a new area of advocacy. So when he joined the fight to reform bail practices in the courts in Harris County, Texas, after a 2018 federal lawsuit found the bail-setting process unconstitutional, he did the obvious thing: He got himself arrested.

“It was an opportunity to learn,” he says. “I went through the process of getting booked and having bail set, to learn more about it. You understand and can better visualize what happens when somebody comes in and goes through this.”

In reality, Van Fleet walked into the police station at the invitation of a judge who also supported reforming bail procedures for misdemeanors. As a lawyer who hadn’t practiced criminal law—he maintained a high-profile practice as a Texas antitrust litigator and Big Law partner—he wanted a first-hand view. But Van Fleet’s decades of commitment to pro bono work has earned him the affectionate title “part-time public interest lawyer” from his colleagues at Texas Appleseed, a nonprofit legal services organization.

In 2020, Van Fleet was honored with the American Bar Association’s Pro Bono Publico Award for his “outstanding commitment to volunteer legal services for the poor and disadvantaged.” The award, the ABA said, recognized “commitment, energy, and new approaches to the delivery of pro bono service . . . [that] serve as models for others in the legal profession.”

At the same time, until he “semi-retired” in 2017, Van Fleet maintained his commercial litigation practice. He credits the firms he has worked for—Vinson & Elkins, Greenberg Traurig, and McDermott Will & Emery— with supporting his devotion to pro bono work. Yes, it meant a lot of hours, but that comes with the lawyer territory.

“You’re going to work long hours anyway, and if you feel you’re helping to make a real difference in the world, rather than just making rich companies richer, it’s a real boost to you,” he says. “Working those other hours helps you buy a house and educate your children, and that’s nice, too. But the pro bono work is really, really rewarding.”

‘The Work I’m Proudest Of’

Van Fleet’s pro bono work has included representing immigrant asylum-seekers and, as a member of the Supreme Court of Texas Permanent Judicial Commission for Children, Youth, and Families, safeguarding juvenile rights. He led Texas Appleseed’s work to promote passage of a 2001 law that required all criminal courts in the state to adopt formal procedures for providing appointed lawyers to indigent defendants. Currently, he is involved with monitoring the federal consent order that resulted from the Harris County bail lawsuit.

Choosing his favorite pro bono case is like choosing a favorite child: Each is special. “Each of them finds a place in my heart,” he says.

Among the most memorable of his many cases, he cites representing a transgender woman from Mexico in her asylum application (during the Trump administration crackdown on immigration) and winning. “They were just shutting down everything, and [winning meant] convincing the judge that if she were sent back to Mexico, given the Neanderthal attitudes still there, she would get beat up and sold into sex slavery like she was before” she fled to the United States.

And he fondly remembers handling the adoption proceedings when the phlebotomist who took his blood donations remarried and her new husband adopted her child. “We’re sitting there with the judge and we’ve all got tears in our eyes, because here we are putting a family together,” Van Fleet says.

“You’re going to work long hours anyway, and if you feel you’re helping to make a real difference in the world, rather than just making rich companies richer, it’s a real boost to you.”

The case he describes as his best work “professionally and emotionally” came in 2016 when he contributed an amicus curiae brief in Fisher v. University of Texas, in which the Supreme Court upheld the university’s race-conscious admissions policy. Van Fleet, who had represented the university in Hopwood v. Texas, a previous admissions case—and who also had opposed UT in a trademark infringement case—was invited by university counsel to write a brief on behalf of the family of Heman Sweatt. Sweatt’s rejection from the University of Texas School of Law in 1946 led to a 1950 Supreme Court decision ordering the desegregation of public universities in Texas. The case was a precursor to the 1954 Brown v. Board of Education decision.

Van Fleet met with and grew close to Sweatt’s daughter and nephews. That relationship and his own experience with Texas school segregation in the 1960s inspired his brief, in which he combined “the history, a tiny bit of law, a big chunk of sociology, and musings about why diversity in education is good for people of color and for white people, too,” he says. “I think that’s probably the work I’m proudest of.”

‘What Lawyers Are Supposed To Do’

The story of equal access to education in Texas is one Van Fleet has known his whole life. An Army brat, he learned progressive values from his father, who led Black soldiers in post-war Japan. As a child in Texas, he walked past Huntsville’s segregated Samuel W. Houston Elementary School to get to his own whites-only school. In middle school, before schools were desegregated in 1968, he played sports with Black students because “the very few folks who they would recruit to come over to the white school, to show that we were integrated, were also athletes.”

On the recommendation of his constitutional history professor at Rice University, Van Fleet enrolled at Columbia Law School after his junior year through the Law School’s Accelerated Interdisciplinary Legal Education program—despite knowing nothing about the campus or mid-1970s New York City.

“One of my college friends asked, ‘Are you at all afraid for your safety?’ And I said, ‘Well, what do you mean?’ She said, ‘Do you know where Columbia is?’ I said, ‘It’s an Ivy League school. It’s some New England village, right?’ And she said, ‘Have you heard of the village of Harlem?’”

To a boy from small-town Texas, New York was “a shock,’’ he says. “There I was in the biggest, most interesting city in the world, and let me say, it was easily half the education.”

Nonetheless, Van Fleet graduated first in his class and won the John Ordronaux Prize. Along the way, he read the book Simple Justice, an accounting of the Brown decision, and decided, “This is what lawyers are supposed to do.”

“I had gone in thinking that you had to choose between private practice and public interest,” he says. “And I wasn’t sure which way to go. You could do well, or you could do good.”

Although Columbia Law had no requirement at the time for student pro bono hours (it was instituted in 1992), Van Fleet worked on death penalty and wrongful conviction cases with civil rights champion Jack Greenberg ’48 and pathbreaking employment discrimination cases with Harriet Rabb ’66 in one of the Law School’s first clinics.

“I’m doing this while taking antitrust and securities, and I found them equally challenging and fascinating,” he says. “Pretty early on, I learned that you can—and it’s pretty fun to—have a foot in straight-up business commercial practice and litigation but also do some public interest work.”

If there’s a theme in his pro bono work, he says, it’s to fight systemic racism. For example, court decisions allowing some consideration of race in higher education admissions “are paltry recompense to our financially segregated public school system. It’s nothing compared to what reforms really need to be made,” he says. Bail reform: “Far and away, the people who can’t get out of jail pretrial—those presumed innocent—because they can’t afford bail, are Black and brown people. And trying to get legal services for the poor? Poor people are overwhelmingly Black and brown people.”

In his commercial litigation practice, Van Fleet worked on Pennzoil’s team in the oil company’s epic 1985 litigation with Texaco for interfering with Pennzoil’s purchase of Getty Oil. It resulted in an $11 billion judgment against Texaco “back in the day, when a billion dollars was a lot of money.” (After several appeals and a bankruptcy filing by Texaco, Pennzoil settled for $3 billion.) In 1990, he brought one of the first tech antitrust lawsuits: a long-running battle between chip maker Cyrix and microprocessor giant Intel. “That was another good war that I was proud of,” he says.

Van Fleet believes pro bono work has helped him become a better trial lawyer because “what moves judges and juries, even in the driest commercial case, is the human story,” he says. “You have to include the other stuff—the numbers, the science, or whatever it is—but what they really relate to is the human story.” Conversely, litigation skills—organizing of materials, digging up evidence, reviewing documents and records—improve a pro bono case immeasurably, he says.

But he realized early in his pro bono career, when he and his first wife, a bankruptcy lawyer, went to the Texas border to represent asylum seekers, that the stakes in the two areas are very different.

“On the commercial side, we were used to playing at the big, blue-chip table. All of a sudden, we’re representing people who, if we’re not successful, are probably going to die if they are sent back—whether your client is a Miskito Indian fighting the Sandinistas, or a squatter on the rich landlord’s land, or . . . a Salvadoran woman whose son was taken by the army and whose husband was shot by the rebels and just wants out,” he says. “You’re working on your opening statement in the mirror, and it hits you: If I don’t win for these people, it’s not a $10 million loss that you can write off on your taxes. They’re going to die. And for no crime.”

Pro bono work means trying to “make a difference in one person’s life,” he says. Sometimes, as in Fisher and in Houston bail reform, that leads to a bigger result.

“One thing that I took away from Columbia is that you can have an effect in making systemic changes,” Van Fleet says. “You don’t just read about it. You study with people like Herbert Wechsler, Jack Greenberg, Ruth Bader Ginsburg. They’re real people, just like you. And they can make a huge difference. And so can you.”

From Beijing to Frankfurt, New York to Hong Kong, Chen has forged a unique path on her way to leading Shearman’s international investment funds practice in Asia.