Mary Marshall ’20 plans to publish work by both established and emerging voices. 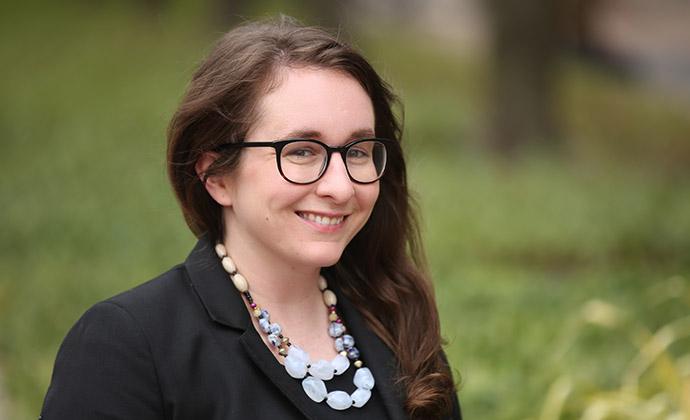 Before enrolling at Columbia Law School in 2017, Mary Marshall ’20 was a teacher and administrator at charter schools in the Bronx and Manhattan. “I got into education as a way of fighting intergenerational cycles of poverty,” she says. For seven years, Marshall witnessed how racism and socioeconomic barriers constrain certain populations in New York. She decided to attend law school to develop the tools for remedying that systemic inequality: “I want to serve disadvantaged communities and lift them up,” she says.

Now, as the new editor in chief of the 118-year-old, student-run Columbia Law Review, she wants to help redress another type of systemic inequality: the lingering gender and racial imbalances in legal academia. “The chance to help shape scholarship and elevate unique, new, and diverse voices is an unbelievable opportunity,” she says.

Marshall, whose optimism is tempered by her real-world experiences, appreciates the power of her new position. “The law review is one of the best in the country. Publication in CLR can help a new professor get tenure at a top university,” she says. “It’s impactful not only because of the topics of the scholarship that it selects, but also because it’s a place where student editors are empowered to select new and up-and-coming scholars and help them get their pieces to publication.”

Marshall is committed to making the law review an inclusive environment. “I want any 2L who comes on board to feel that the review is a welcoming community and a place where they can feel comfortable, which has not always been true for people of color or women at law schools and in institutions like the law review,” she says.

Marshall is a budding scholar herself: In October 2019, the Columbia Law Review will publish her note, “Miller v. Alabama and the Problem of Prediction,” a commentary on the case in which the U.S. Supreme Court held that mandatory sentences of life without the possibility of parole for juvenile offenders are unconstitutional. “Miller’s decision to limit juvenile life without parole was a good first step,” she explains. “However, the court continues to allow juveniles to be sentenced to life without parole if they are ‘irreparably corrupt,’ which, as a former educator I think is nonsense—but you can’t just say that in a note.”

In her note, she posits that research in developmental psychology and neuroscience demonstrates that it is impossible to predict a person’s behavior decades in the future. “I argue for a ban on life without parole for juveniles because there's no way that you can actually show that someone is deserving of the sentence under the framework that the court set forth,” she says. “And personally, I don't think that anyone is deserving of a life sentence.”

A Long Commitment to Racial Justice

The daughter of two lawyers, Marshall has been concerned about racial justice issues since her childhood in Macon, Georgia, a city of 91,000 where 67 percent of the population is black. “There was a lot of white flight to private schools in response to integration,” she says. “My parents were not willing to send me into a system that was borne out of racism, so I went to a public high school where there was a police presence and students, especially students of color, would be thrown into lockers by officers and get punished for what I thought was just teenage behavior. So I grew up witnessing a lot of structural injustice from a position of a lot of privilege.”

After receiving a B.A. from Princeton University’s Woodrow Wilson School of Public and International Affairs in 2010, she joined Teach for America and eventually realized that she wanted to effect social and political change beyond the classroom. At Columbia, she is pursuing a public interest path and served as co-president for programming for the Student Public Interest Network. As a student in the Challenging the Consequences of Mass Incarceration Clinic, in April she argued a 14th Amendment claim in the U.S. District Court for the Circuit of Connecticut for summary judgment on behalf of Richard Reynolds, who has been in solitary confinement for 25 years. “In my wildest dreams, I never thought I would get the chance to do such important work as a law student,” she says.

This summer, she is returning to Georgia to work at the Southern Center for Human Rights. “They do a lot of work on the death penalty, habeas appeals, criminal justice–adjacent civil litigation, and the criminalization of poverty,” she says, adding that the center was instrumental in creating the Georgia Public Defender’s Office, where she volunteered during high school.

Marshall believes that the key to success as an advocate, editor, and teacher is empathic leadership. “You always need to remember that you are working on behalf of a student or client,” she says. “You do not necessarily know what is best for them. You are there to serve. You are there to learn. You are there to respect the community that you’re working for.”

Meet the New Editor in Chief of the Columbia Law Review: Tomi Williams ’19