Meet the New Editor in Chief of the Columbia Law Review

As an undergraduate at Amherst College, Tomi Williams ’19 was twice elected student body president, played on the varsity soccer team, chaired the school’s judiciary council, and served as editor in chief of the Amherst College Law Review. He was so well-known and well-liked that he was dubbed a “campus celebrity.”

Although he is accustomed to holding leadership roles, Williams, 23, says he was nonplussed when Columbia Law Review Editor-in-Chief Kelsey Austin Ruescher ’18 called to tell him he’d been appointed her successor. “I thought I was being pranked. I was mostly in disbelief,” he says, flashing a broad smile, as he sits in the airy private office on the sixth floor of William C. Warren Hall that is reserved for the editor in chief.

“Tomi is the epitome of dedicated and humble leadership,” says Ruescher. “He has an unparalleled work ethic. He is unafraid to think big. He has the talent of bringing people together. Watching him in action in the seven weeks since he became editor in chief has been an enormous privilege and joy. He inspires me, and I learn from him every day.” 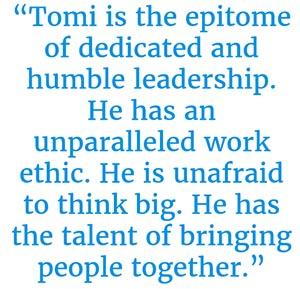 Born in England to Nigerian parents who moved their family to the United States when he was three years old, Williams grew up in Ann Arbor, Michigan, and Columbia, Maryland. His father, a physician, and his mother, a nurse, expected Williams and his older brother, Tunji, to follow them into medicine. Instead, both brothers followed the example set by their paternal grandparents who attended law school in England and then moved back to Nigeria. (His grandmother was a magistrate judge, and his grandfather was a BBC correspondent. Tunji is the co-founder of dealWIP, a legal technology startup.)

As a high school student in Maryland, Williams founded a nonprofit called Hands on Works, an organization to offer internships to underserved Baltimore students to introduce them to professional career paths. He then became a public figure when the Baltimore Sun published a feature story about him after he was elected by his peers to represent them as the student member of the Howard County Board of Education.

Williams arrived at Columbia Law School in 2016 with the idea that he might pursue a career as a prosecutor and so he enrolled in the Challenging the Consequences of Mass Incarceration Clinic. “I wanted to make sure before I entered that type of work that I understood the seriousness of putting someone behind bars,” says Williams, who has visited both New York’s Rikers Island prison complex and Connecticut’s “supermax” Northern Correctional Institution. Williams plans to develop a deeper understanding of a public service career after graduation when he clerks with Judge Richard Bennett of the U.S. District Court for the District of Maryland.

Since assuming the editorship of the Law Review on February 5, Williams has been in overdrive. He helped organize a Spring Break Pro Bono Caravan in New Orleans; he and other Law School students worked at the Capital Appeals Project, which provides representation to indigent defendants sentenced to death in Louisiana. On March 23, he delivered the closing remarks at the Columbia Law Review’s daylong symposium, “A First Amendment for All? Free Expression in an Age of Inequality.” And he traveled to Austin, Texas for a convention of law review editors. “It’s the first time four of the top schools have black editors in chief,” says Williams, naming Djenab Conde at Berkeley’s California Law Review, Michael Thomas at the Harvard Law Review, Megan Brown at the Michigan Law Review. “I grew close to them over the weekend.” 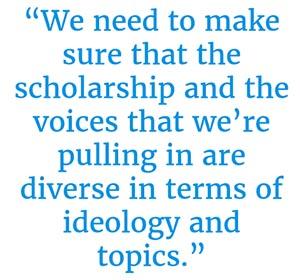 “We have to have a more original online presence,” says Williams, who notes the editors are considering adding blogs and podcasts by Law Review contributors and Law School professors. “The Law Review has to catch up with the rest of the media. Maybe we won’t have any of these things this year, but we are trying to make a digital plan for the next five years.”

One of Williams's goals is to expand the journal’s editorial purview. “We need to make sure that the scholarship and the voices that we’re pulling in are diverse in terms of ideology and topics, in terms of where our contributors are in their professional lives, whether they’re a fellow, or assistant professor, or full professor,” he says.

Continuing to diversify the Law Review staff is another priority. “We’re looking at how to make sure we’re bringing in enough diverse individuals in terms of gender, race, socioeconomic status, disabilities, religious backgrounds, and ideologies of all types,” he says.  “We want to make sure that the culture and the conversations here are as fruitful as possible because it’s just a better conversation and a more intellectually vibrant community when there is a diversity of thought and background and making sure that we bring folks in with a full sense of participation and ownership.”