The editorship of the Columbia Law Review is not only a prestigious honor but also a second full-time job for a full-time student. “I’m working 40 hours a week already,” says Kelsey Austin Ruescher ’18, who was appointed editor-in-chief of the journal in early February and now leads a staff of 90 students. “Sometimes I wish there were double the number because there is so much to do!”

Founded in 1901, the Columbia Law Review is a forum for intellectual discourse. The content is a mix of articles and essays by academics, “notes” by students who propose solutions to specific legal problems, and responses to any published piece. “Our goal is to shape legal dialogue based on the pieces we select and the ideas we put forward,” says Ruescher. “We choose a good diversity of pieces so there is no political agenda. We are just looking for good scholarship.”

The journal is an independent nonprofit corporation that publishes eight hefty volumes every year and annually receives thousands of submissions from legal scholars around the world. “It’s important that we pick pieces that are responsive to what is happening in the world, but have a high enough vantage point that they will stand the test of time,” says Ruescher, sitting in her spacious glass office with a view of Jerome Greene Hall across the street. 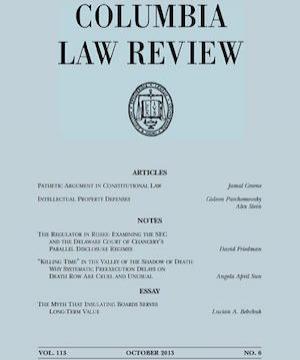 One of the primary roles of the editors is holding contributors to exacting academic standards. “We make sure all the factual assertions in a piece are substantiated,” says Ruescher. “We make sure when an author cites a source that it stands for that proposition and that all the citations conform with The Bluebook format, the uniform style of citation for the legal field.”

Ruescher explains that demonstrating an aptitude for editing citations is one part of the application process for 1Ls who want to join the Law Review. Prospective editors must also write a personal essay and a response to a legal problem posed by the senior staff. “This happens in May, just after finals, when everyone is really tired but they rally,” she says.  “I did that.”

When Ruescher arrived at Columbia in the summer of 2015, after five years working for a diversified investment firm in New York’s SoHo neighborhood, she knew that joining the Law Review was one of her goals. “I really love reading and writing and I saw this was a really good opportunity to work on those skills,” says Ruescher, who graduated as an English major from the College of the Holy Cross in 2010. “I knew the Law Review was an intellectual community, and I wanted to join an organization that focused on scholarship and ideas.”

Ruescher has not yet settled on a career path. “I’m inclined toward litigation,” she says. Last summer, she was a judicial intern in the Southern District of New York, and she will work at Covington & Burling in Washington, D.C, this summer. “They have so many great practice areas, and I’ll use the summer to figure out what I am interested in.”

But Ruescher will not be free of her Law Review responsibilities. “The Law Review staff grades the submissions over the summer and chooses the new 45 staff members,” she explains, adding that before then she must devote the spring to membership recruitment, in addition to her prodigious editorial duties. “I do an initial read of every piece we accept, and I read for themes, logical gaps, and structural changes that we might want to suggest to the author before we enter the production process,” she says. “The executive managing editor and I are the last set of eyes on every piece, so we do final reads, too.”

Although it is a general interest publication (unlike Columbia Law School’s 13 other journals devoted to specific topics such as the arts, gender law, taxes, and human rights), the Law Review occasionally publishes a themed issue inspired by a symposium, such as the “The Legacy of Constance Baker Motley: Education and the Law in the United States Today” on March 31. “We will devote our November issue to the ideas that professors present at the symposim,” says Ruescher.

Ruescher says the Law Review has some fresh initiatives—a new public editor who will study readership needs and another editor focusing on data and analytics—and she considers herself a steward of a well-run institution. “Coming in, our executive team had a very welcoming and inclusive culture,” she says. “That is something we are really committed to strengthening and preserving.”