A scholar who draws on political science and intellectual history in studying democracy, Ahmed joins a growing cohort of legal and constitutional theorists on the faculty. 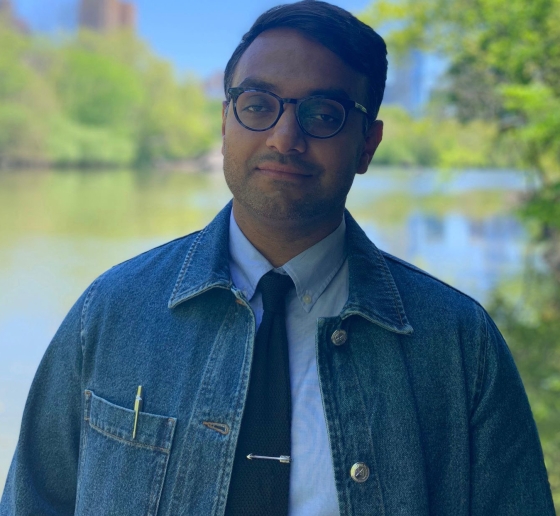 Ahmed—who joined the Columbia Law School faculty as associate professor of law on July 1 after two years as an academic fellow and lecturer in law—is a legal theorist with interests in public and private law. One of his focuses is constitutional norms, which he says are contingent and arbitrary practices that dictate much of political life in the United States.

“Constitutional norms implement abstract principles, like the separation of powers, or indeterminate text, such as ‘advise and consent,’ into specific behavior and action,” he writes in “A Theory of Constitutional Norms,” his recent article in the Michigan Law Review.

When Ahmed was a student at Yale Law School—while simultaneously working on his Ph.D. in political science at Columbia University—a professor asked him to help her survey the literature on constitutional norms. “I read a lot of articles that I found quite penetrating but thought there was space for more theory,” he says, adding that three years of law school pushed his dissertation, American Unwritten Constitutionalism, in a legal direction.

Ahmed’s research is primarily in legal theory. “All of my instincts are towards dissection, framework, building taxonomy, and conceptual analysis,” he says. “Theory is a no-ceiling, no-floor enterprise. A good theory is endlessly generative. Even if people see the limits to the theory, they keep using it because they feel like it gives them some traction in a really complex world.

“I’m interested in places where legal reasoning runs out,” he continues, “where the lawyer’s toolkit ceases to explain the underlying phenomena, and where we need particularly philosophical and conceptual tools. We also need the tools of intellectual history in particular to explain why things are the way they are or why they are confusing.”

Ahmed says his work is in a sense like therapy. “I’m less convinced by therapists who emphasize ‘healing’ or ‘resolution’ and more attracted to those who say, ‘here’s the underlying structure of your problems,’” he says. “I approach legal theory in a similar way. Solutions are important, but we can only start developing them—and understanding their limitations—when we have a firm grasp on the character of our questions and concepts.”

When Ahmed was 11, he began commuting from his home in Queens to the Upper East Side of Manhattan to attend Hunter College High School (HCHS), a publicly-funded school for intellectually gifted students. Ahmed describes HCHS as “intensely academic,” and says the social studies program had extraordinary teachers who continually challenged him. “They nourished my curiosity and kept pushing me,” he says.

At Harvard College, Ahmed saw an academic path open up when he read philosopher John Rawls’ A Theory of Justice. “I really took to the form of reasoning, the clarity of argument, the framework building that he was masterful at,” he says. “From that point on, I fell in love with analytic political philosophy, and I also became interested in intellectual history.”

Ahmed is particularly excited to join the Columbia Law faculty. “I know I am biased, but I think Columbia is the best place for blending legal theory and history in the country,” he says. “I’ve been familiar with the work of Columbia legal scholars for a long time and was lucky to get to know them personally as a fellow.”

In the fall semester, Ahmed will be teaching Introduction to American Law, a seminar called Democracy’s Futures (with Senior Research Scholar Seyla Benhabib), and Torts. “Torts is a great class for legal theorists to teach because so much of it is about legal reasoning,” he says. “It’s really a class about thinking like a lawyer, and it’s independently a fascinating area of law.”

Given his own educational history, Ahmed has a reverence for teaching. “The classroom is the one space in life where I’ve found that if a teacher and a student come in with good faith, you may not figure everything out, but you are guaranteed to have grown,” he says. “When you’re in a classroom as a teacher, your students are putting themselves in your hands—and that’s a remarkable thing. These people are giving you their attention for two or four hours each week minimum and then a couple of hours of studying, and that’s a lot to invest in one person, right?”

Ahmed knows from experience that a teacher must evince genuine zeal within the first 5 to 10 minutes of a class to win over students. “If they sense you don’t want to be there, then it’s game over,” he says. “I’ve got a lot to learn as a teacher, but I’m hoping my enthusiasm will help me along the way.”