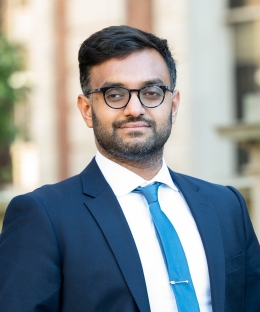 Ashraf Ahmed is a legal theorist who works primarily in public law. He studies constitutional law, theory, and history, election law, and administrative law. His work draws on political philosophy, democratic theory, and intellectual history to study the nature and materials of legal argument and issues of representation, equality, and freedom in public law. His current projects examine the conceptual foundations of election law doctrine and the historical origins of presidential primacy in administrative law. In prior work, Ahmed explored the character of constitutional norms, the tensions between presidential power and democratic legitimacy, and the anti-majoritarian turn in election law.

Ahmed received his PhD in Political Science from Columbia University and his JD from Yale Law School. While at Yale Law School, Ahmed served as Articles Editor on the Yale Law Journal. He has consulted for Demos and was a graduate organizer for United Auto Workers.

Ahmed joined Columbia Law School as an academic fellow and lecturer in law in 2020 and was appointed associate professor of law on July 1, 2022.

A scholar who draws on political science and intellectual history in studying democracy, Ahmed joins a growing cohort of legal and constitutional theorists on the faculty.

| Columbia News
In The Media