The Jagdish Bhagwati Fellowship, underwritten by the Indian government, supports graduate students at Columbia Law School who wish to specialize in the study of international trade, trade law, public interest, and human rights. 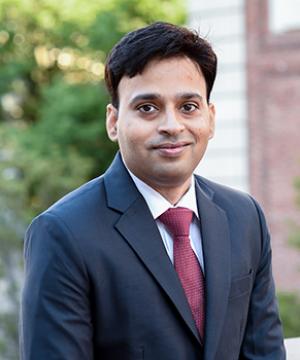 According to 2019–2020 Bhagwati Fellowship recipient Rohan ’20 LL.M., “Life is about creating yourself. And to create yourself, you need to constantly reinvent yourself.” He applies a similar passion for innovation to his study of international trade law, hoping to help correct India’s lagging trade flow and encourage its “true trade potential.”

Before he earned his law degree in India in 2018, Rohan received a bachelor's degree in engineering, and later, in 2011, joined the Indian government’s Indian Revenue Service (IRS). He was first posted as a customs officer at the India-Pakistan border, where he supervised the movement of passengers between the two countries. Later, he transitioned into a customs assessment role, gaining exposure to various international trade and compliance requirements under the multilateral trade regime administered by the World Trade Organization (WTO).

“I got firsthand experience in one of the barriers to trade when I was challenged with the question of reducing the dwell time of export and import cargo,” Rohan says. “While trying to address the issue, I realized that it would involve an in-depth study of measures to reduce delay in customs procedures, one of the non-tariff barriers.” This observation became the basis for Rohan’s interest in the effect of non-tariff barriers on international trade.

In 2014, Rohan began to explore India’s trade framework from a different angle after accepting a position in the tax division of the IRS. His team played a key role in drafting India’s new Goods and Services Tax (GST) law, which resulted in an overhaul of the country’s entire existing tax structure—an important step in improving the ease of doing business and developing infrastructure to facilitate trade.

“The GST experience highlighted my own limitations relating to global tax practices and the taxation of international business,” Rohan said. “Standing at the cusp of change in India, I firmly believed it was an opportune time to reinvent myself again.” Intent on adding a global perspective to his arsenal, he decided to obtain a master’s degree with a specialization in international trade law.

Rohan is pursuing his LL.M. degree at Columbia Law School with the support of the Indian government, which annually underwrites the fellowship named for Columbia University Professor Jagdish Bhagwati, a world-renowned economist and senior fellow at the Council on Foreign Relations.

Rohan intends to focus his research at the Law School on ways to reduce or eliminate non-tariff barriers, looking to international best practices for solutions. “Despite its network of trade agreements and commitments under the WTO, India still has significant potential to reduce non-tariff barriers that limit its trade with the world,” he says. After finishing his LL.M., Rohan plans to return to India and use his experience to effect meaningful, long-lasting policy change.