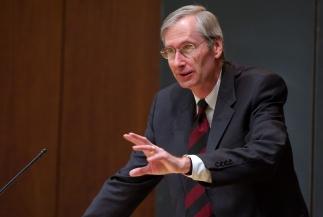 Press contact: Erin St. John Kelly [email protected]
212-854-1787/Cell: 646-646-284-8549/Public Affairs Office: 212-854-1787
November 11, 2008 (NEW YORK) – General Counsel Bill Dauster (above) of the U.S. Senate Finance Committee spoke about the need for economic reform in the next presidential administration before an audience of Columbia Law School students on October 29, as part of Social Justice Initiatives’ (SJI) inaugural Visitor From Government Practice program.
Tackling energy, health care, the housing market and the budget deficit are all priorities for the next administration. "We do not need to choose among these tasks," said Dauster. "We need to address all of them."
“Bill was a student of mine in my first year of teaching at Columbia Law School,” said Professor Richard Briffault in his introductory remarks. Briffault referred to the 1984 graduate as a “model of government lawyer career development” before describing Dauster’s more than two-decade career in the executive and legislative branches of government, including as Deputy Assistant to President Clinton for Economic Policy.
“This is a promising time to be talking about what is going on in Washington, on the eve of an important election,” said Dauster, who also holds a master’s degree in economics from the University of Southern California. “The economy has come to dominate public perceptions, and with good reason.”
Dauster forecasts that any new president has a window of opportunity of six to 18 months to strengthen the economy. The six-month period reflects a “honeymoon” period for President Obama, while the latter end of the range coincides with campaigning for the 2010 mid-term elections.
An economic stimulus package is also necessary as “the collapse in the housing market and the decline in home values have undermined family wealth," said Dauster. "Many economists calculate that the loss in wealth has led to a decrease in consumer spending on the order to $200 to $300 billion a year. We are already seeing declines in consumer confidence and retail sales bearing these predictions out.”
Health care reform must also be an essential goal of the next administration, according to Dauster. He predicts that a rise in unemployment will cause a loss in employer-sponsored health coverage, leading to even more uninsured American families.
Dauster thinks the recent passage of the $700 billion financial rescue package was the right thing to do. “I do find it distasteful that the bailout was on the top end and not for people on Main Street, although I think the bailout made sense,” he added.
Ruth Greenwood ’09 L.L.M. was pleased she attended Dauster’s lecture. “I was interested in this initially because I knew a lot about the Clinton presidency and its policies,” said Greenwood, an Australian. “If you don’t fix health care, you can’t fix the economy,” said Greenwood, concurring with Dauster.
Dauster is the first to participate in the Visitor From Government Practice program since Social Justice Initiatives established it this year, according to SJI Dean Ellen Chapnick. “The program includes a major presentation to the Columbia community, one-on-one sessions with law students, a brown bag lunch for students on how to get jobs on Capitol Hill and meetings with faculty members,” added Chapnick. SJI’s goal is to host a government practice visitor each semester with the “expectation that Columbia Law School graduates who have succeeded in practice will be the visitors.”
This inaugural program should prove beneficial for current law students, as the Center for Public Interest Law has seen a “sizeable uptick in the numbers of students interested in government summer jobs and permanent employment,” said Chapnick. Social Justice Initiatives will hold a panel on November 12 with alumni whose careers paths have included government practice.